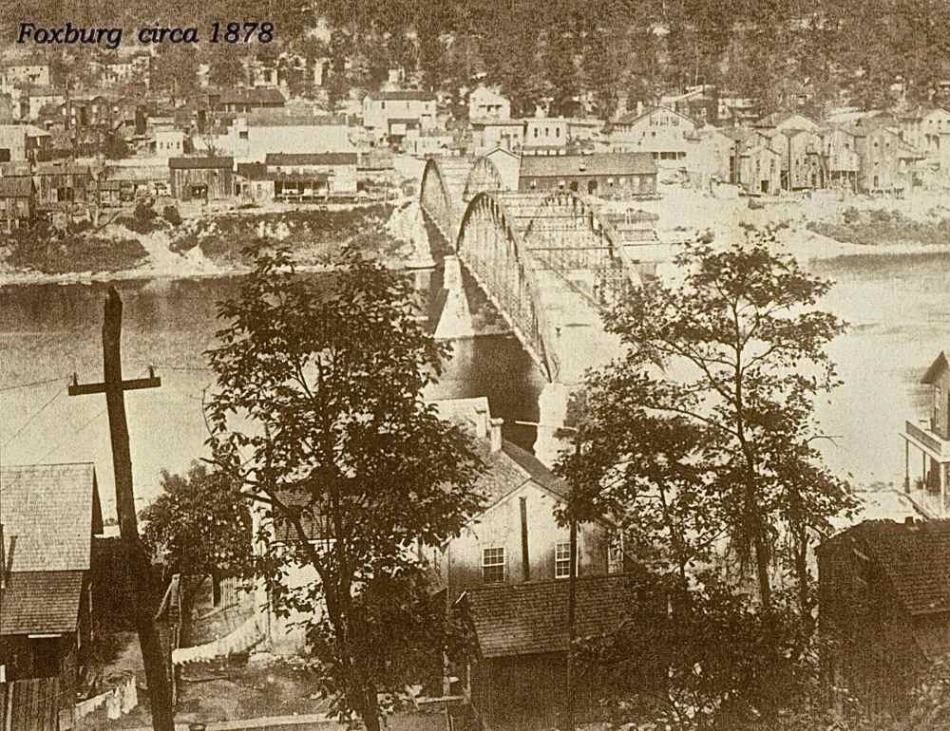 Local legend has it that the spot along the Allegheny River where Foxburg is now nestled in Clarion County was once payment for an illustrious forefather’s debt. In lieu of cash, William Penn supposedly promised a Philadelphia doctor surnamed Fox “as much land as could be walked from sun up to sun down” out in the colony’s wild west. So the visionary Fox hired a fleet-footed Native American guide to do the walking for him, on the longest day of summer, and thus did Fox acquire a huge swath of Penn’s Woods.
Ruth Reamer, Pittsburgh Post Gazette, October 5, 2014

Whether apocryphal or referring to the Walking Purchase of land by William Penn’s son, Tom, from the Lenape Native Americans in eastern Pennsylvania, the legend conveys the storied charm that has followed Foxburg since its inception. The town takes its name from the Fox family of Philadelphia, former owners of the land upon which the town was built. The prominent Fox family of Philadelphia were descendants of George Fox, the founder of the Quaker religion. In 1796, Samuel Mickle Fox, along with his brother George and brothers- in-law Joseph Parker Norris and George Roberts, purchased a number of tracts of land in western Pennsylvania from the Commonwealth. The land warrant was for 6,600 acres located at the Allegheny River north of its confluence with Toby’s Creek, now the Clarion River.

Six of these tracts, numbered #5725–5730, comprising 6,600 acres (27 km2), were contiguous and located along the Allegheny north of its confluence with Toby’s Creek (today’s Clarion River). The present town of Foxburg is located on what was designated tract #5729.

Samuel’s son, Joseph, purchased these tracts from his father’s estate in 1816 and established a residence there ten years later, south of the town near the mouth of the Clarion. It became known to generations as “the Fox Mansion” or simply “the Mansion”. Succeeding generations would make it a seasonal residence for the next one hundred and forty years. 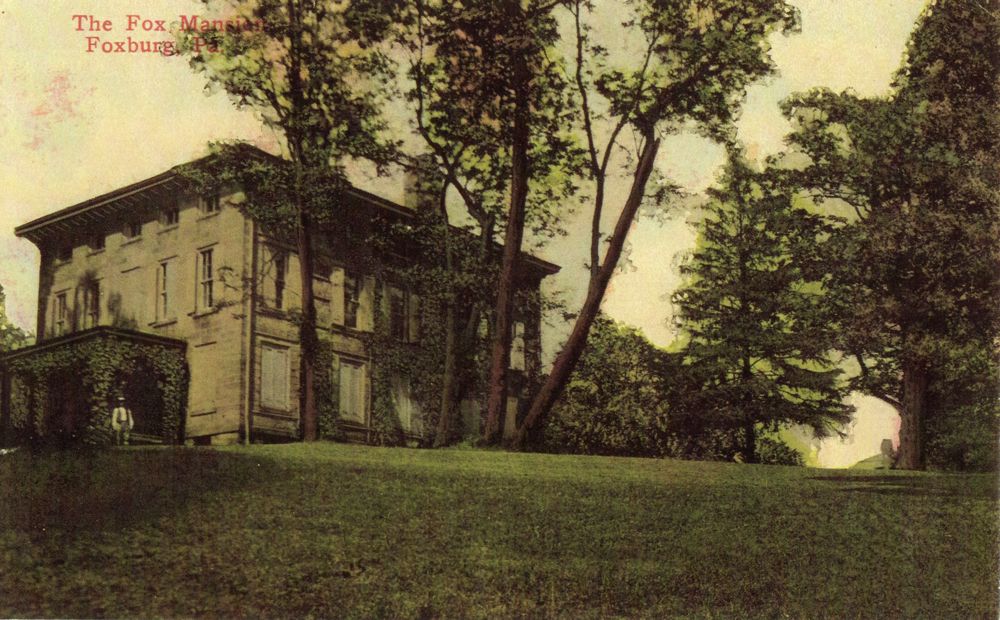 The discovery of oil in Titusville in 1859 soon affected the Allegheny-Clarion River Valley – dramatically. The first well was drilled in the area in 1867, about the same time the Allegheny Valley Railroad (AVRR) was extended north from Kittanning and Pittsburgh to Buffalo. “Black Gold Fever” soon extended to the newly established towns of Emlenton and Foxburg. Early industry utilized the iron production and transportation routes to become a major supplier of oil well supplies. Oil prospectors soon drilled successful wells in the area and also found large supplies of natural gas.

The town of Foxburg was founded amidst the oil developments in western Pennsylvania in 1870. At its height during the early 1870s it had a population of over 1,000. It remained a village until its incorporation as a borough on February 6, 1930.

The post-office was established in 1870 and Colonel Gibson was appointed postmaster. C.C. Bone opened a news-room and stationery store about the same time. Then followed other stores, a meat-market or two, and dwellings among others.  Mr. Joseph Hart arrived in 1870, building an oil refinery across the river in 1873. In 1876 he moved it up on the hill above Foxburg and subsequently sold it to the Standard Oil Company. 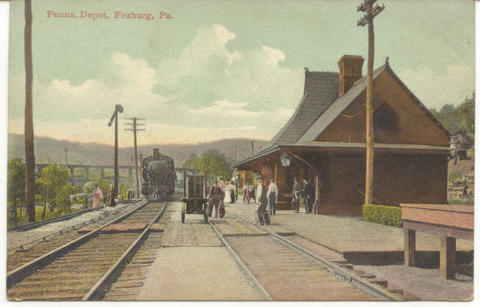 Over the years, Foxburg has experienced numerous fires. The first fire occurred in 1876, when all the buildings on the river side of the Allegheny Valley Railroad were burned, including Porterfield & Comb’s store, express office, Smith’s meat market and other buildings, amounting in loss to about $25,000. The same ground was again burnt over in 1881, taking two restaurants, Wales’s hardware store, Moore’s grocery, express office, billiard-room and oil-well supply store. 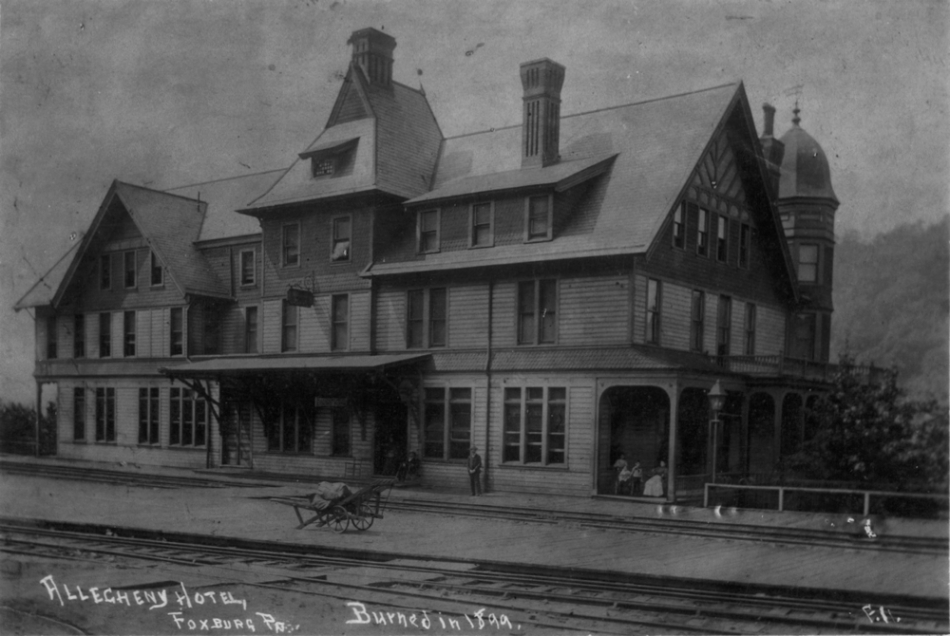 In the Spring of 1883 the Fox Hotel was burned and during the next two years was rebuilt by the Fox estate. The Valley depot was burned in 1884 and another neat building erected the next summer. In July, 1886, another fire occurred in this place, burning Smith’s meat-market, D.C. Hart’s store, the Odd Fellow’s Hall, a room above, Barnes’s tin-shop, and a millinery store. After all these fires most of the buildings were rebuilt.  The original Foxburg school-building was erected in 1874 by heirs of the Fox estate. It was a neat, two-story building containing three rooms and well furnished. Mrs. Samuel Fox was a liberal contributor to the schools since they were organized, besides taxes on the estate, which included the greater part of the public funds raised there. 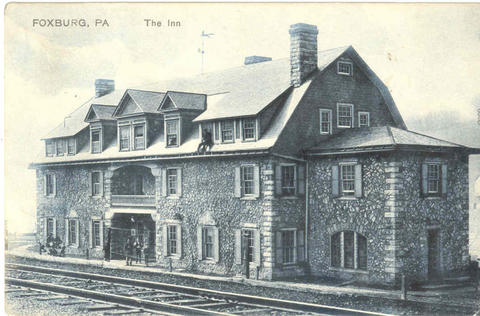 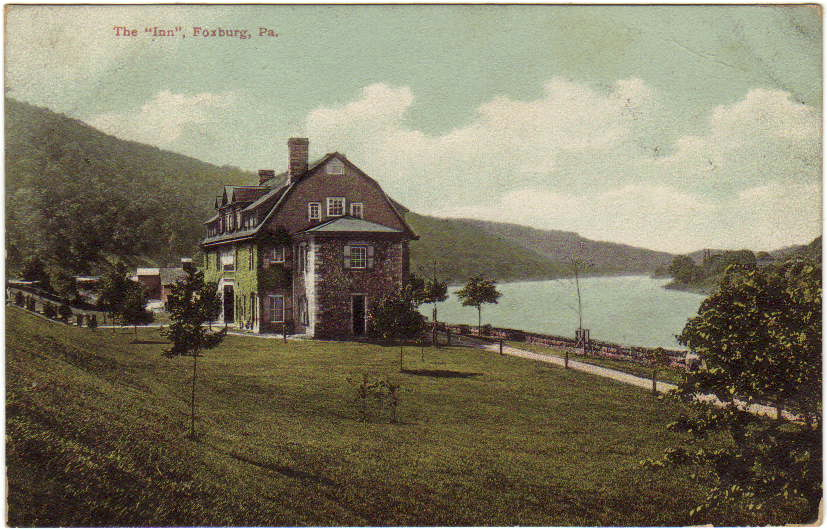 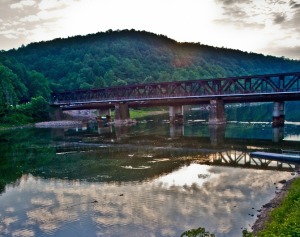 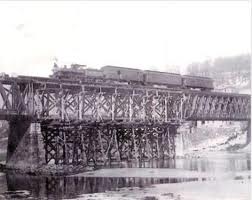 Foxburg quickly grew with the addition of two rail lines, the north-south Allegheny Valley Railroad – a division of the Pennsylvania Railroad – and the east-west Baltimore and Ohio Railroad. It was the Baltimore and Ohio railroad that distinguished the town when a double-decker railroad bridge was built across the Allegheny River at Foxburg.  B & O trains traveled on the top level, over regular wagon and pedestrian traffic crossing the river on the deck below. Though the railroad stopped using this bridge in 1964, it was utilized for one lane vehicle traffic on the lower level until 2008 when it was demolished and replaced by a single tier, two lane bridge.

The Fox mansion, now known as RiverStone Farm, was built in 1828.   For generations it served as the summer home of the Fox family, which traveled from Philadelphia to enjoy the bucolic beauty of the the Allegheny-Clarion River Valley. Dr. Arthur Steffee, a retired orthopedic surgeon, bought the estate in 1999.  He and his wife, Patricia, have painstakingly restored it and spent years cultivating its grounds. 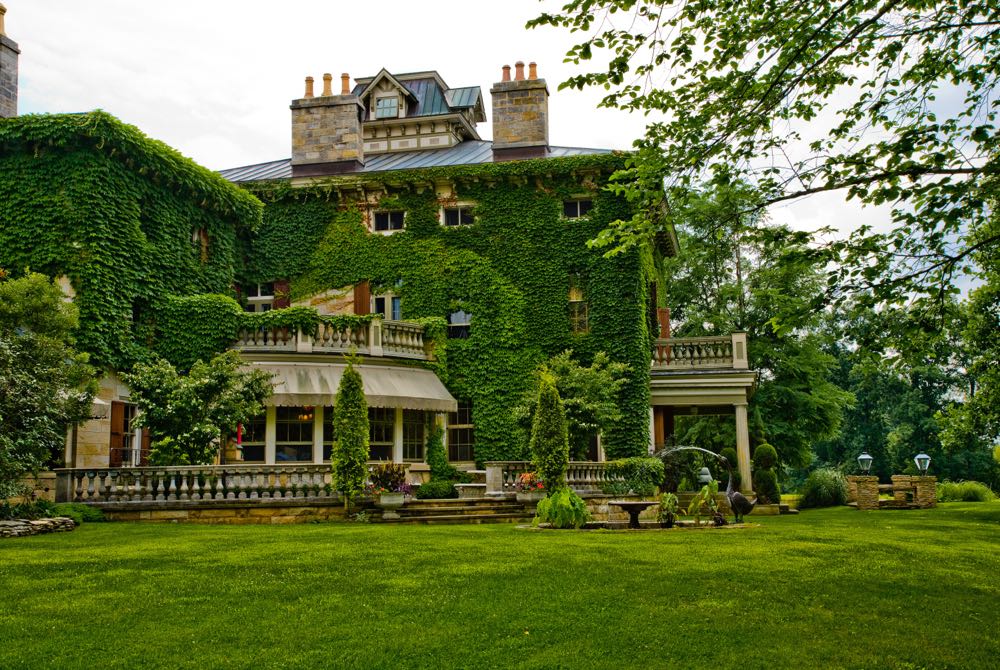 Joseph Mickle Fox, great-grandson of the original owner, discovered golf at St. Andrew’s in Scotland while traveling with a Philadelphia-based cricket team. He fell in love with the game, constructed a hole — and then three — in a meadow.  In 1887 he  established  The Foxburg Country Club.  In 1888 the five hole course was increased to nine.  The current, public nine-hole course is noted as “the longest in-continuous-use golf course in the United States”.  The Foxburg Country Club in 1924 purchased the land which they had been leasing.  The course’s club house hosts the American Golf Hall of Fame and Museum. 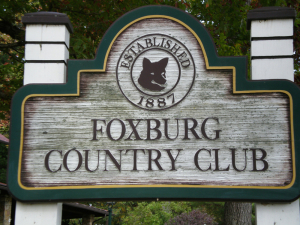 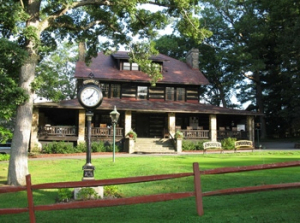 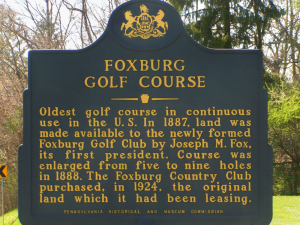 In the 1880s, the Fox family also built a beautiful Neo-Gothic stone church and parish house  – the Memorial Episcopal Church of our Father. The angel painting above its altar is the likeness of Sarah Fox, who died in her youth. During the summer months the church is open each Friday from 2 p.m. onward and for services on Sundays at 10:30 a.m. The church serves as the venue for Allegheny RiverStone Center for the Art’s annual holiday concert performed by the Pittsburgh Symphony Brass in December. 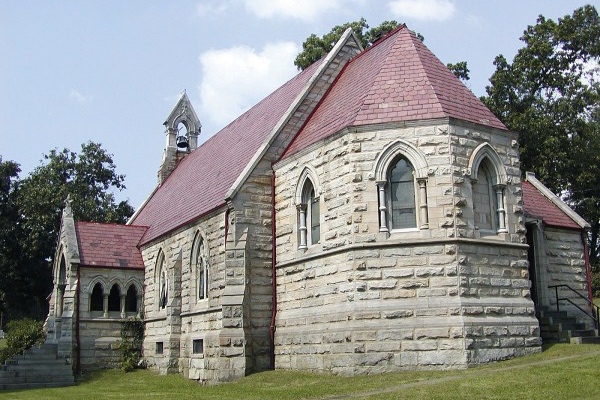 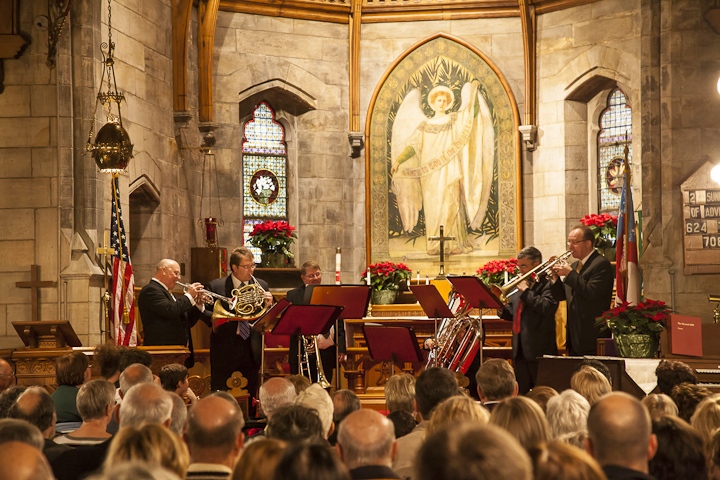 Another descendant named Hannah Fox built the Foxburg Free Library in 1909, with a theater/concert hall on the second floor which, after years of varied uses (including as a medical center), has been restored to its original purpose. Lincoln Hall, recently refurbished by Dr. Arthur and Patricia Steffee, is the main performance venue of the Allegheny RiverStone Center for the Arts. With its McKissisk Mighty Wurlitzer Theatre Organ and seven foot Steinway piano, Lincoln Hall seats 120 people and provides transparent acoustics and an intimate environment for more than 18 concerts presented annually by ARCA.

Just like the Fox family before him, Dr. Arthur and Patricia Steffee have endowed the town of Foxburg with buildings that anchor new cultural and economic enterprises: The Allegheny Grille, Foxburg Inn, Foxburg Wine Cellars, Foxburg Pizza and Country Store and the restored Red Brick Gallery and Gift Shop. 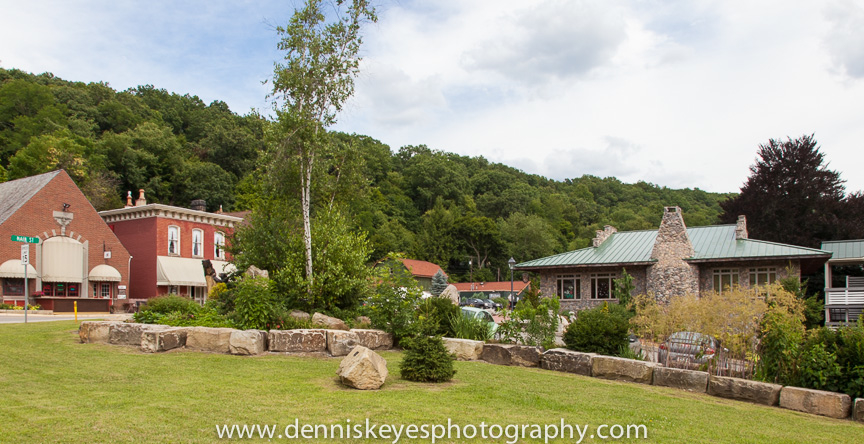 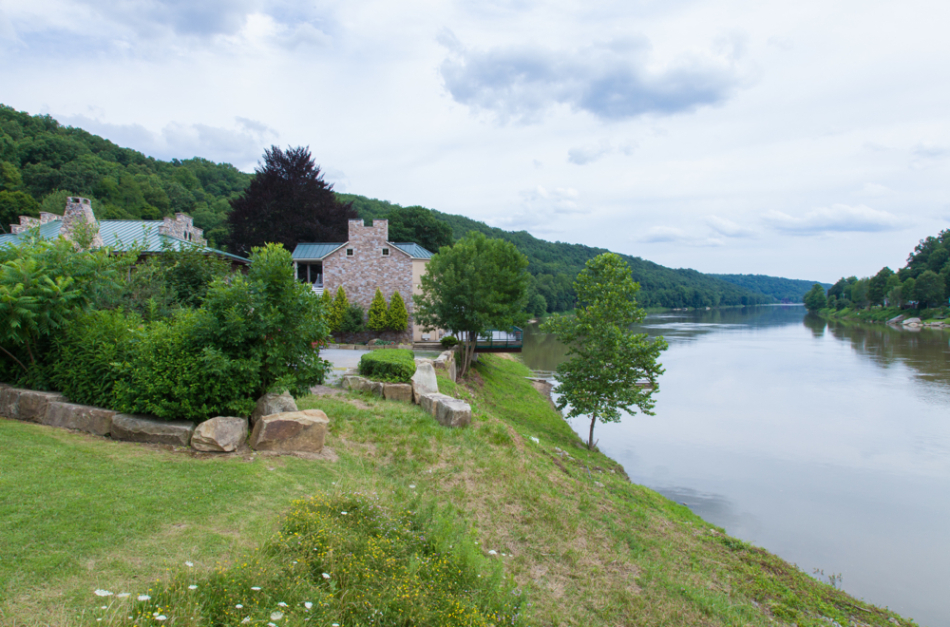