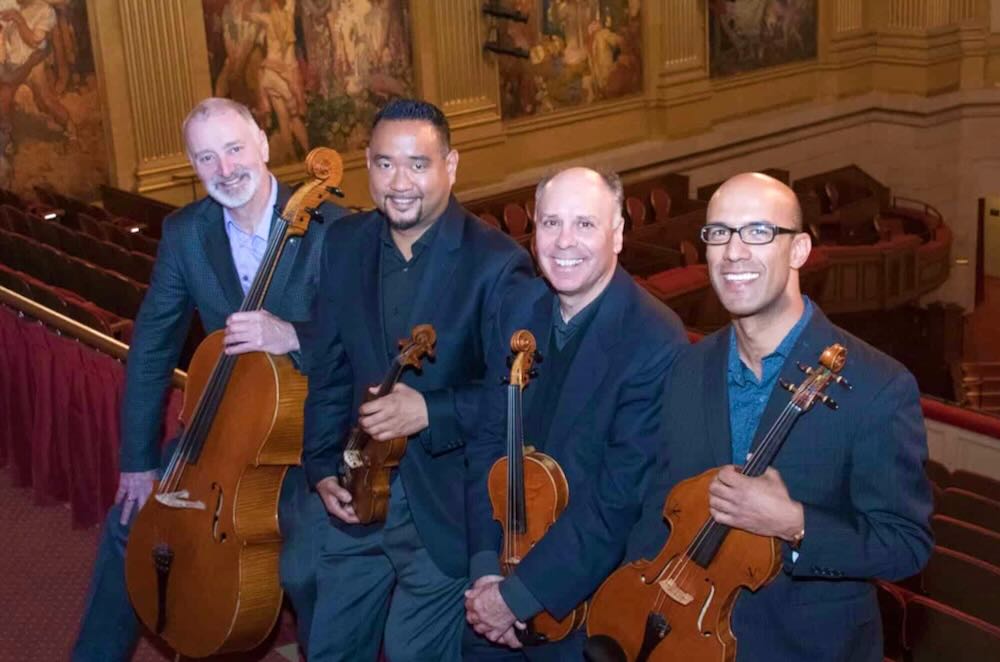 Celebrating its 42nd Anniversary in 2023, the Alexander String Quartet has performed in the major music capitals of five continents, securing its standing among the world’s premier ensembles. Widely admired for its interpretations of Beethoven, Mozart, and Shostakovich, the quartet’s recordings have won international critical acclaim. They have established themselves as important advocates of new music commissioning dozens of new works.

ASQ formed in New York City in 1981, capturing international attention in 1985 as the first American quartet to win the London (now Wigmore) International String Quartet Competition. The Alexander plays on a matched set of instruments made in San Francisco by Francis Kuttner, known as the Ellen M. Egger quartet.

Join us and be inspired by these consummate artists who critics have said “seemed not so much to be playing the music as breathing it.” 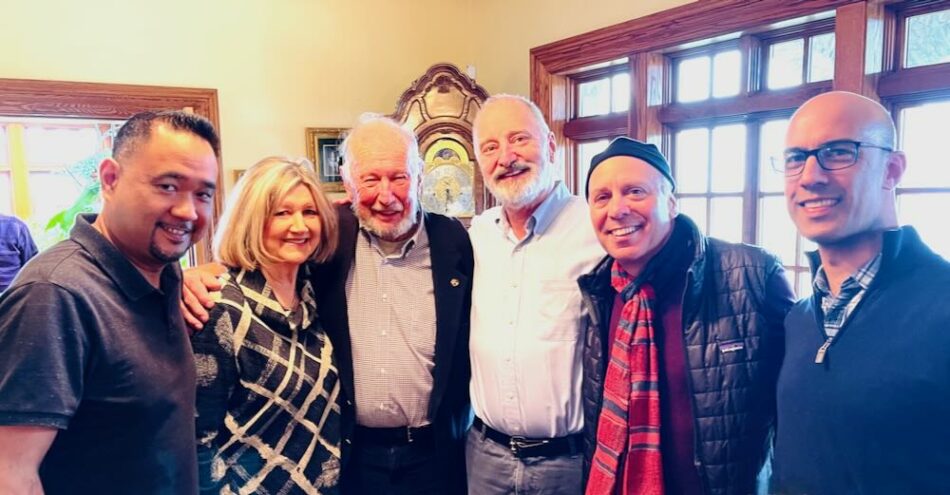 Post-COVID, open theatre style seating has returned to 100% capacity.  There is no mask nor vaccine passport requirement. Please refrain from attending if you are ill or if you have been exposed to anyone with COVID.

Allegheny RiverStone Center for the Arts is grateful for the generous sponsorship of this concert by Dr. Arthur and Marybeth Steffee. 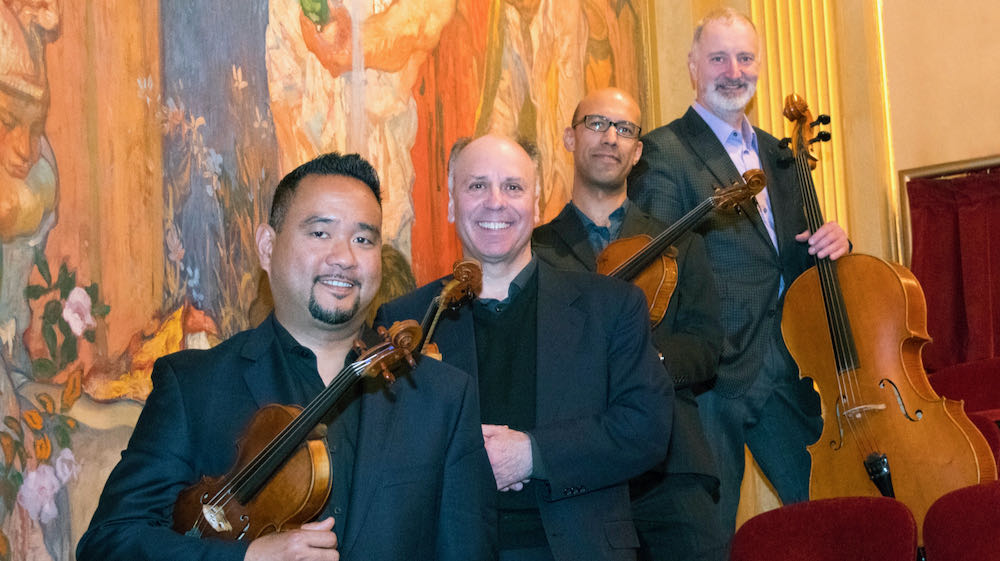 Enjoy the Post-Concert Reception at the Red Brick Gallery

After the concert, enjoy a wine and cheese reception at the Red Brick Gallery and Gift Shop to meet the Artists at the Opening of the exhibit of Pittsburgh photographer ROY ENGELBRECHT at 17 Main Street in Foxburg from 4 to 6 PM on Sunday, April 16.

Pittsburgh photographer Roy Engelbrecht began in his life in Aruba and attended high school in New York City before moving to Pittsburgh to attend the University of Pittsburgh, where he received his Bachelors and Masters Degrees in biology and science education, respectively.  It was during college that he began developing and printing his own film.  Starting out as a portrait photographer, for twenty-five years he has pursued his passion of photographing architecture.

Plan to Make a Day of it in beautiful Foxburg and before the Alexander String Quartet concert enjoy Foxburg – take a brisk walk in the refreshing Spring air along the Allegheny River trail or rent bicycles with Foxburg Tours in the morning or early afternoon!  Have lunch at the Allegheny Grille with inside seating overlooking the Allegheny River, or for more casual fare, at Foxburg Pizza with salads, sandwiches and pizza.  Save time to enjoy wine tasting at Foxburg Wine Cellars and savor a gourmet coffee and hand made chocolate at Divani Chocolatier and Barrista.  Or spend Saturday night in Foxburg in the lovely Foxburg Inn or up the river at Emlenton’s bed and breakfast,  The Barnard House. 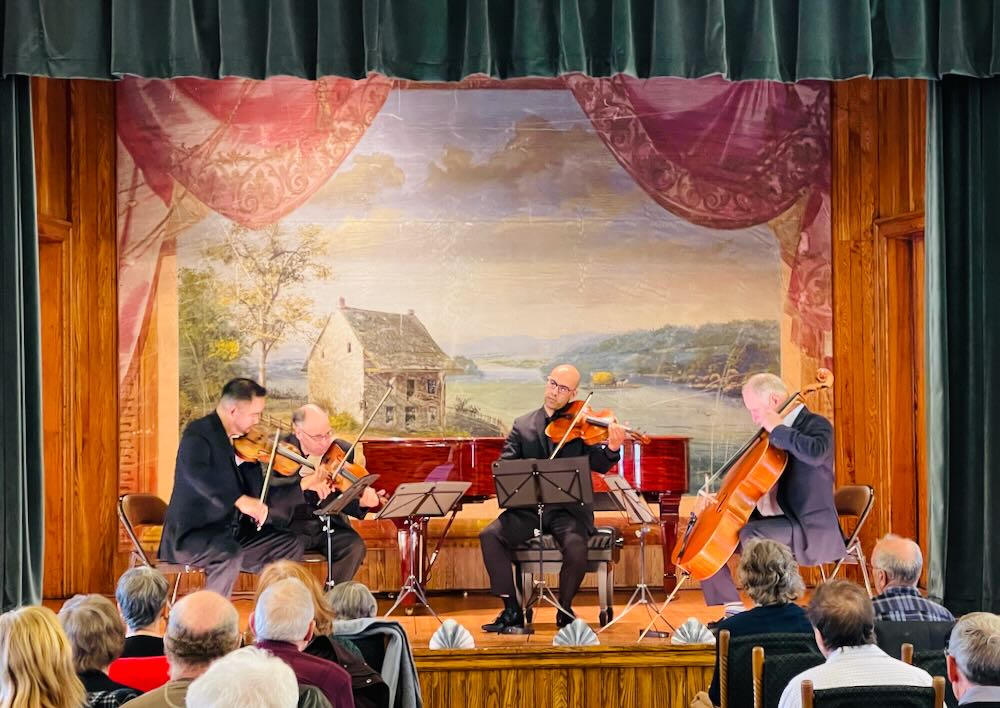 Allegheny RiverStone Center for the Arts welcomes the Alexander String Quartet back to Lincoln Hall to perform a chamber music concert of some of the most beloved works of the string quartet literature on Sunday, April 16, 2023 at 2:00 PM in Lincoln Hall. 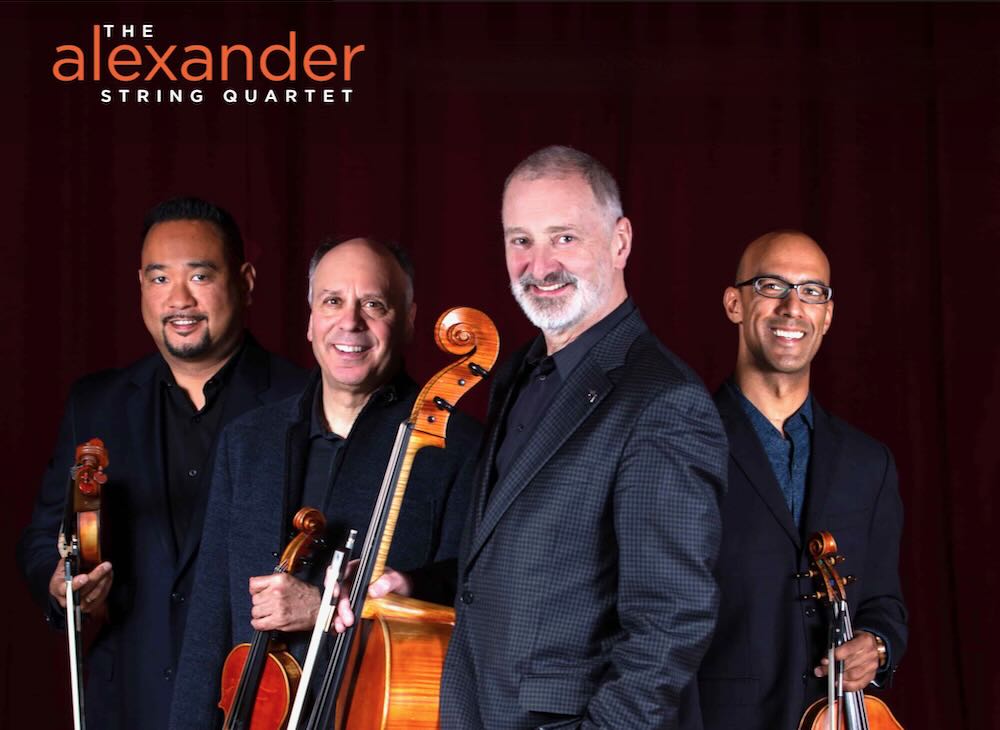 Hailed internationally for their consummate artistry, the Alexander String Quartet is one of the world’s premier string quartets.

“Never have I heard such keen awareness of this dimension of the score as I hear it in this performance. To say that the ensemble plays with a unanimity of attack, articulate phrasing, and penetrating tone is almost beside the point. Today, those aspects of execution are expected from the world’s topflight chamber music players. But what really sets these readings apart for me is the ways in which these musicians connect the dots, so to speak, and find just the right moments and just the right ways in which to reveal to us Mozart’s underlying grand plan.… This is truly phenomenal both in terms of the playing and the recording. … That said, the only word to describe the Alexander Quartet members and Joyce Yang’s playing of [The Piano Quartet in E-flat Major, K 493] is exquisite.”
JERRY DUBINS, FANFARE MAGAZINE
(Apotheosis, vol. 2 — Mozart: The Piano Quartets, FCL2018)

“You want the short review? This is the best new music disc I have heard this year, and you should buy it. … Cox seems to have a thing for quartet writing, and if she stops at two it will be a tragedy. Color, exquisite rhythmic turns, evocative harmonies, and coalescence of melodic invention all conspire to make her music richly rewarding and horizon-expanding. The Alexander plays perfectly, and the Foghorn sound is great. An enthusiastic recommendation!”
STEPHEN RITTER, AUDIOPHILE AUDITION (5 Star Review! Dec. 2015)
(Patagón — Works by Cindy Cox, FCL2015) 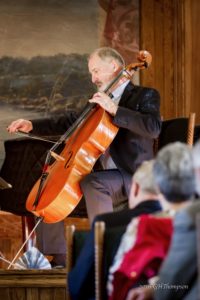 “I felt then that I had found my perfect recording of these two favourite works. While it remains enjoyable, Joyce Yang and the Alexanders have completely trumped it. Quite how they have managed to find new things to say about such standard repertoire is quite beyond me, but there is something to marvel at around every corner.”
DAVID BARKER, MUSIC WEB INTERNATIONAL (A MusicWeb International Recording of the Year)
(Brahms & Schumann — The Piano Quintets, FCL2014)

“The talented Alexanders and brilliant Joyce Yang take on two towers of 19th century chamber music, the Brahms Piano Quintet in f Op 34 and the Schumann Piano Quintet in Eb op 44. Frankly any recording that elicits a positive comment about Brahms from me is worth noting. No stodgy, elegant (read dull and technical) readings here, these are gutsy, lively, exciting and maybe even a bit edgy performances. Excellent production, including concise yet informative notes.”
DON CLARK, PICTURES ON SILENCE, “BAKER’S DOZEN BEST OF 2014”
(Brahms & Schumann: The Piano Quintets, FCL2014)

“I’m not often as bowled over by core repertoire recordings as I was by this one. After handing off the album to a friend, the second opinion came back positive too: “The Alexanders really have a great feel for Brahms,” he said, and then he borrowed all the other ASQ albums I had.”
BRIAN REINHART, MUSIC WEB INTERNATIONAL (A MusicWeb International Recording of the Year)
(Brahms & Schumann — The Piano Quintets, FCL2014)

“This review is going to be short, because so highly-acclaimed is this disc that my opinion isn’t particularly important, if ever it was. Simply put, after delighting the critical establishment with some marvelous Piano Quintets, the Alexander String Quartet and friends turn in an unbelievable set of the Brahms Sextets and Quintets for Strings. Violist Toby Appel joins the Quartet throughout the program and easily reminds me how beautiful an instrument the viola can be. Nor is cellist David Requiro a mere guest artist. Folks, this is what chamber music is about! Deeply moving, highly involved playing is backed by exceptional sound quality that is warm and shows the genuine partnership between the players. … After 30 years, the Alexander String Quartet is demanding that we take a listen, just as after all this time, Brahms can still surprise us. These are deeply personal works in equally personal performances. Don’t miss them.”
BRIAN WIGMAN, CLASSICAL NET
(Brahms String Quintets and Sextets — 2 CDs, FCL2012)

“Dream-come-true performances from the excellent Alexander String Quartet. As they did during the Haydn Quartet that opened the concert, the players impressed with their sure ensemble, lyricism, accurate pitch, handsome sound and technical fluidity.”
THE BOSTON GLOBE

Consult the Alexander String Quartet’s website for their full discography. 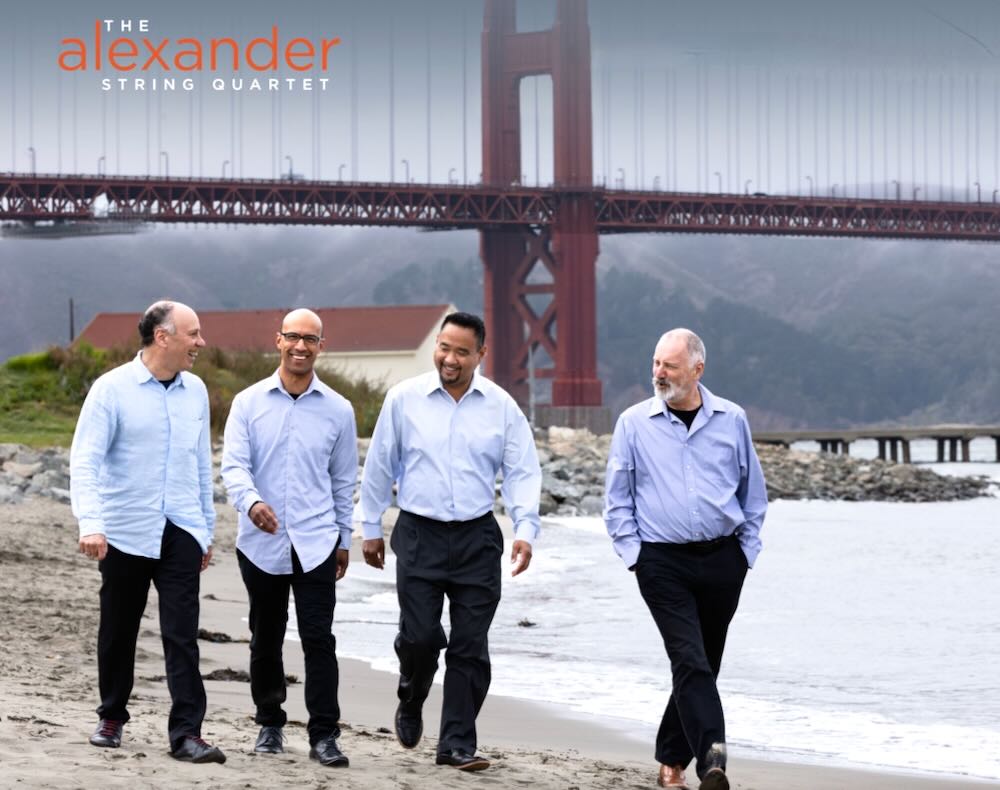 The Alexander String Quartet has performed in the major music capitals of five continents, securing its standing among the world’s premier ensembles, and a major artistic presence in its home base of San Francisco, serving since 1989 as Ensemble in Residence of San Francisco Performances and Directors of The Morrison Chamber Music Center Instructional Program at San Francisco State University. Widely admired for its interpretations of Beethoven, Mozart, and Shostakovich, the quartet’s recordings have won international critical acclaim. They have established themselves as important advocates of new music commissioning dozens of new works from composers including Jake Heggie, Cindy Cox, Augusta Read Thomas, Robert Greenberg, Cesar Cano, Tarik O’Regan, Paul Siskind, and Pulitzer Prize-winner Wayne Peterson. Samuel Carl Adams’ new “Quintet with Pillars” was premiered and has been widely performed across the U.S. by the Alexander with pianist Joyce Yang.

The Alexander String Quartet’s annual calendar includes engagements at major halls throughout North America and Europe. They have appeared at Lincoln Center, the 92nd Street Y, and the Metropolitan Museum; Jordan Hall; the Library of Congress; and chamber music societies and universities across the North American continent including Yale, Princeton, Stanford, Lewis and Clark, Pomona, UCLA, the Krannert Center, Purdue and many more. Recent overseas tours include the U.K., the Czech Republic, the Netherlands, Italy, Germany, Spain, Portugal, Switzerland, France, Greece, the Republic of Georgia, Argentina, Panamá, and the Philippines. Their visit to Poland’s Beethoven Easter Festival is beautifully captured in the 2017 award-winning documentary, Con Moto: The Alexander String Quartet. 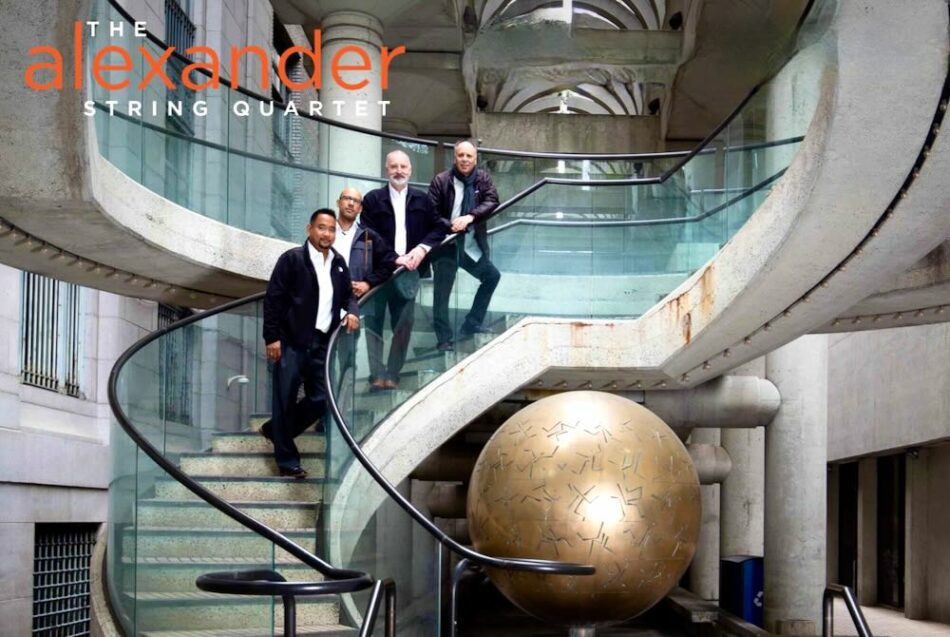 Recording for the FoghornClassics label, their 2020 release of the Mozart and Brahms clarinet quintets (with Eli Eban) has been praised by Fanfare as “clearly one of the Alexander Quartet’s finest releases.” Their release in 2019 of Dvořák’s “American” quartet and piano quintet (with Joyce Yang) was selected by MusicWeb International as a featured recording of the year, praising it for interpretations performed “with the bright-eyed brilliance of first acquaintance.” Also released in 2019 was a recording of the Late Quartets of Mozart, receiving critical acclaim (“Exceptionally beautiful performances of some extraordinarily beautiful music.” –Fanfare), as did their 2018 release of Mozart’s Piano Quartets with Joyce Yang. (“These are by far, hands down and feet up, the most amazing performances of Mozart’s two piano quartets that have ever graced these ears” –Fanfare.) 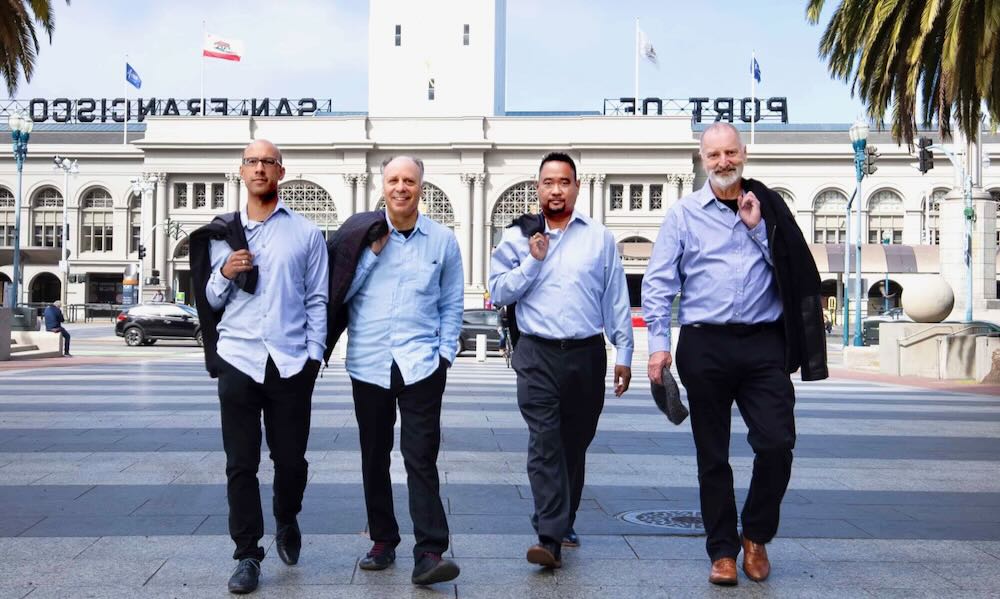 Other major releases have included the combined string quartet cycles of Bartók and Kodály (“If ever an album had ‘Grammy nominee’ written on its front cover, this is it.” –Audiophile Audition); the string quintets and sextets of Brahms with violist Toby Appel and cellist David Requiro (“a uniquely detailed, transparent warmth” –Strings Magazine); the Schumann and Brahms piano quintets with Joyce Yang (“passionate, soulful readings of two pinnacles of the chamber repertory” –The New York Times); and the Beethoven cycle (“A landmark journey through the greatest of all quartet cycles” –Strings Magazine). Their catalog also includes the Shostakovich cycle, Mozart’s Ten Famous Quartets, and the Mahler Song Cycles in new transcriptions by Zakarias Grafilo.

The Alexander String Quartet formed in New York City in 1981, capturing international attention as the first American quartet to win the London (now Wigmore) International String Quartet Competition in 1985. The quartet has received honorary degrees from Allegheny College and Saint Lawrence University, and Presidential medals from Baruch College (CUNY). The Alexander plays on a matched set of instruments made in San Francisco by Francis Kuttner, known as the Ellen M. Egger quartet. 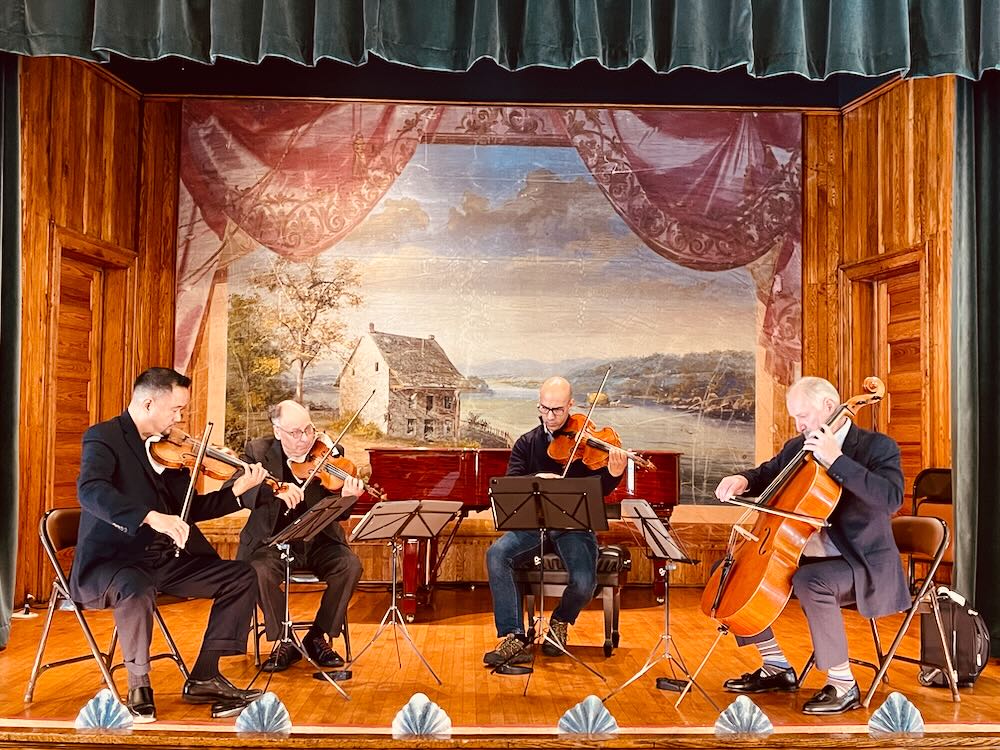