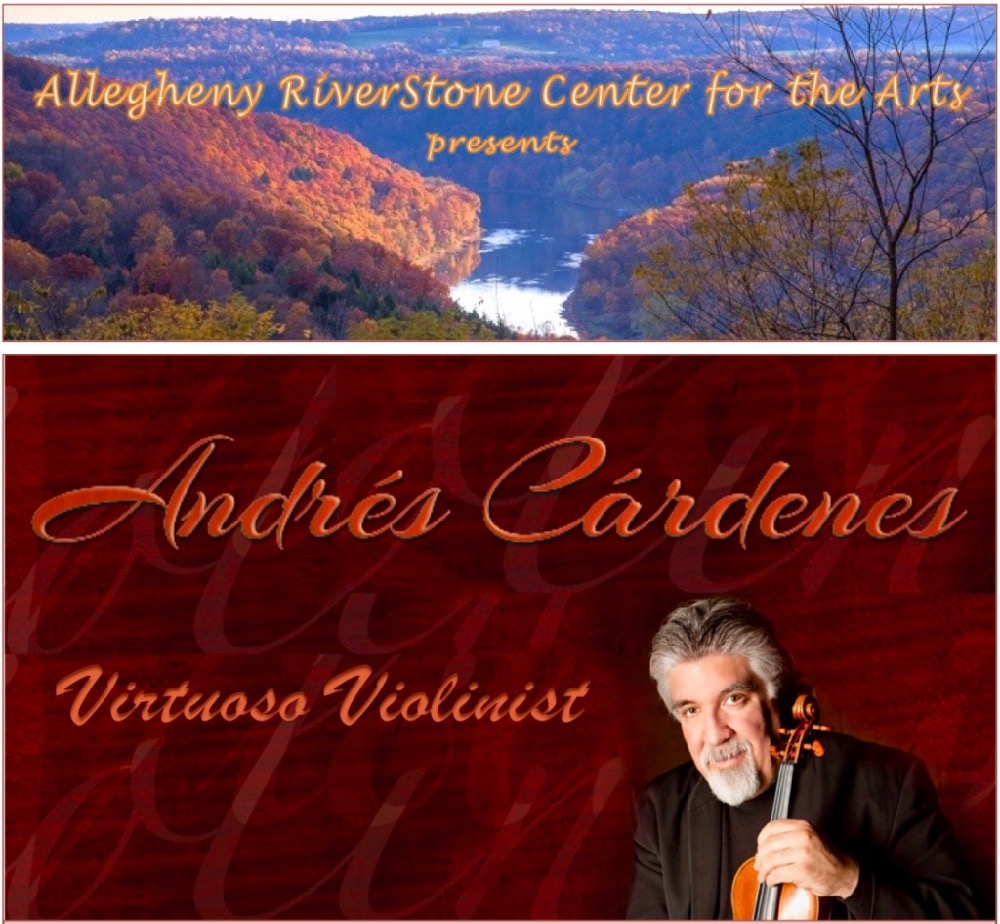 As the beautiful Allegheny River Valley autumn foliage is in full color, JOIN US for what will be an unforgettable and unprecedented afternoon of consummate artistry as Allegheny RiverStone Center for the Arts proudly presents internationally acclaimed and Grammy-nominated virtuoso violinist, Andrés Cárdenes, and pianist Luz Manriquez in concert on Sunday, October 15 at 2:00 PM in Lincoln Hall, Foxburg. 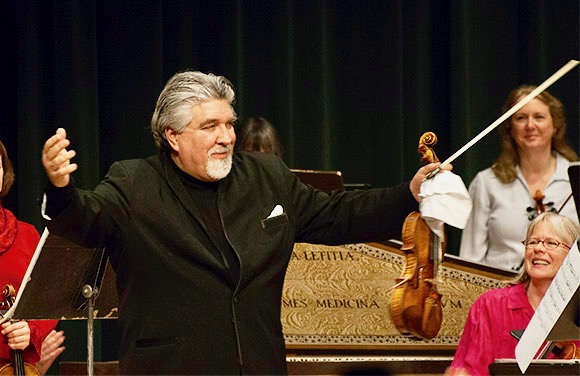 Recognized worldwide as a musical phenomenon, Andrés Cárdenes has parlayed his myriad talents into one of classical music’s most versatile careers. As a violinist, Andrés has been hailed for “the kind of mastery, virtuosity and musical persuasion that should be placed in the company of the great violinists of the 20th century.” El Diario, Santiago, Chile  An intensely passionate and personally charismatic artist, Cuban-born Cárdenes has garnered international acclaim  from critics and audiences alike for his compelling performances as a violinist, conductor, violist, chamber musician, concertmaster, and recording artist.  In Helsinki, Finland, “Cárdenes nearly blew the ceiling off Finlandia Hall with his fiery interpretation of the Sibelius Concerto. The hall was shaken by the shouting and stamping of feet.” Suomen Silta Magazine

Many in western Pennsylvania will remember Andrés Cárdenes’ twenty-one years as Concertmaster of the Pittsburgh Symphony Orchestra, soloing in the orchestra in works such as Strauss’ Ein Heldenleben and appearing frequently in concerto performances. Andrés also conducted the Pittsburgh Symphony Chamber Orchestra for eleven seasons and served as a guest conductor for the Pittsburgh Symphony for five seasons, before leaving to pursue his solo, chamber music and conducting career internationally.  As an acclaimed chamber music player, Andrés Cárdenes has performed with artists such as Yo-Yo Ma, Pinchas Zukerman, Christof Eschenbach, Jon Kimura Parker, Andre Previn, Jaime Laredo, Elliot Fisk, Leonard Slatkin, and Joseph Silverstein.  He has been the violinist of the Diaz Trio since 1995 and has been a member of the Carnegie Mellon Piano Trio since 1991.

You do not want to miss this extraordinary afternoon of memorable performances of master works by Ludwig van Beethoven, Johannes Brahms, Sergei Prokofiev and Cesar Franck… PLUS audience pleasing short works by Fritz Kreisler, arranged by violin greats Jascha Heifetz, Nathan Milstein and Paul Kochansky, featured on his CD, “It’s Quiet Here:  Little Gems for the Violin” on the Arabesque label.   Andrés Cárdenes is one of the most celebrated and accomplished classical artists to perform for ARCA’s appreciative audience in Lincoln Hall.

Tickets are Adults $30, ARCA Members $25, and Students $5.  After the concert, the audience is invited to a Meet the Artist reception at the Red Brick Gallery on Main Street in Foxburg for the opening of the exhibit of Pittsburgh-based pastel landscape artist, Diane Grguras. 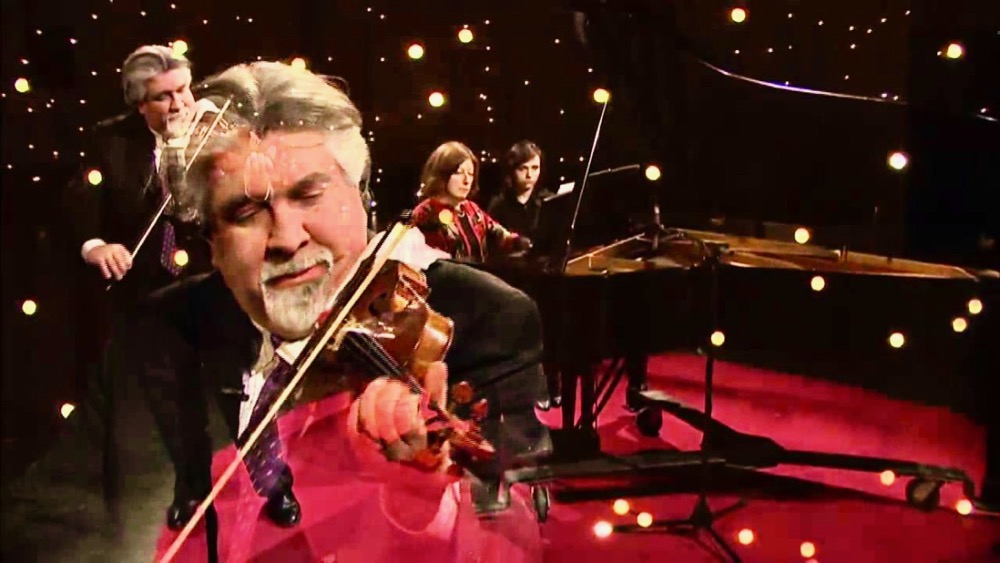 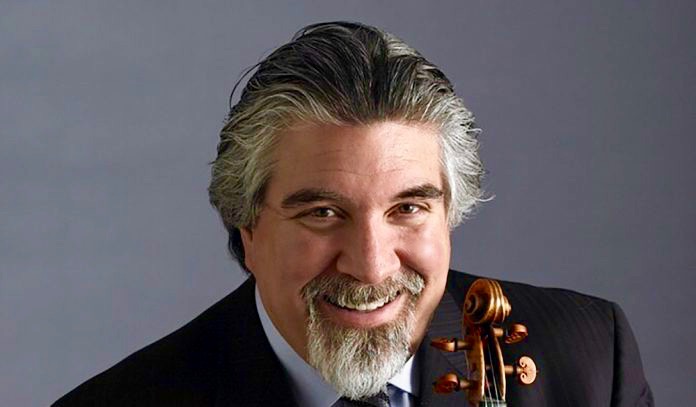 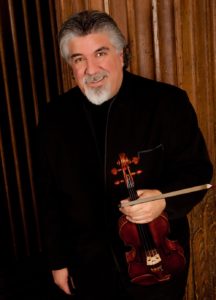 Recognized worldwide as a musical phenomenon, Grammy-nominated Andrés Cárdenes parlays his myriad talents into one of classical music’s most versatile careers. An intensely passionate and personally charismatic artist, Cuban-born Cárdenes has garnered international acclaim from critics and audiences alike for his compelling performances as a violinist, conductor, violist, chamber musician, concertmaster, and recording artist.

This year and next Mr. Cárdenes continues his project to record many standard and contemporary concerti.  Released in 2009 are recordings of concerti by Brahms, Mendelssohn, Beethoven, Barber and David Stock on the Artek and Albany labels. A recording of the complete works for violin by Leonardo Balada was released on Naxos in January 2011. The complete Sonatas by both Hindemith and Brahms, along with the Beethoven, Tchaikovsky and Sibelius Violin Concertos and the complete Schubert Sonatinas and Fantasie are to be released on Artek in the summer and fall of 2016. Plans to record the complete Beethoven violin and piano sonatas with Ian Hobson are slated for 2015/16. Cárdenes’s discography includes over two dozen recordings of concerti, sonatas, short works, orchestral and chamber music on the Ocean, Naxos, Albany, Sony, Arabesque, RCA, ProArte, Telarc, Artek, Melodya and Enharmonic labels. 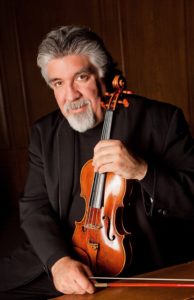 As an ambassador for music of our time, Mr. Cárdenes has commissioned and premiered over 70 works by American, Turkish and Latin American composers such as David Stock, Mike Garson, Erberk Eriylmaz, Leonardo Balada, Ricardo Lorenz, Eduardo Alonso-Crespo, Roberto Sierra, and Marilyn Taft Thomas. His concerto repertoire includes over 100 works, ranging from the Baroque era to the present.

A Cultural Ambassador for UNICEF from 1980-1991 and an indefatigable spokesperson for the arts, Mr. Cárdenes has received numerous awards for his teaching, performances, recordings and humanitarian efforts, most notably from the Mexican Red Cross and the cities of Los Angeles and Shanghai.  He was named Pittsburgh Magazine’s 1997 Classical Artist of the Year and received the 2001 “Shalom” Award from Kollell’s International Jewish Center and the 2013 Chesed-Kindness Award from the Chabad Foundation for promoting world harmony and peace through music.

Mr. Cárdenes was appointed Concertmaster of the Pittsburgh Symphony Orchestra by Maestro Lorin Maazel in 1989 and departed after the 2010 season to concentrate on his conducting, solo and chamber music careers. 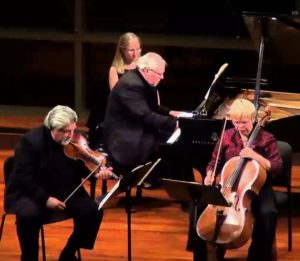 Among his many distinctions are a Grammy nomination in 1991 for his recording of the Tchaikovsky and Arensky Piano Trios with Mona Golabek and Jeffrey Solow.

From 2008-14, Cárdenes was Music Director of Strings Music Festival in Steamboat Springs, Colorado, where Cárdenes also served as conductor of the Strings Festival Orchestra.

A consummate musician, powerful presence and master programmer, Andrés Cárdenes has established himself as a conductor possessing all the essentials of a modern maestro.  His innovative programming and compelling performances have earned him high praise from audiences, critics and colleagues alike.  Former Music Director of Strings Festival Orchestra (CO) from 2009-14, the Pittsburgh Festival Orchestra, and former Music Director and Leader of the Pittsburgh Symphony Chamber Orchestra from 1999-2010, Cárdenes has drawn audiences to the concert hall for a vast array of aural experiences.  A champion of living composers and the music of our time, Cárdenes’s formula for presenting diverse genres of music has been met with great enthusiasm. 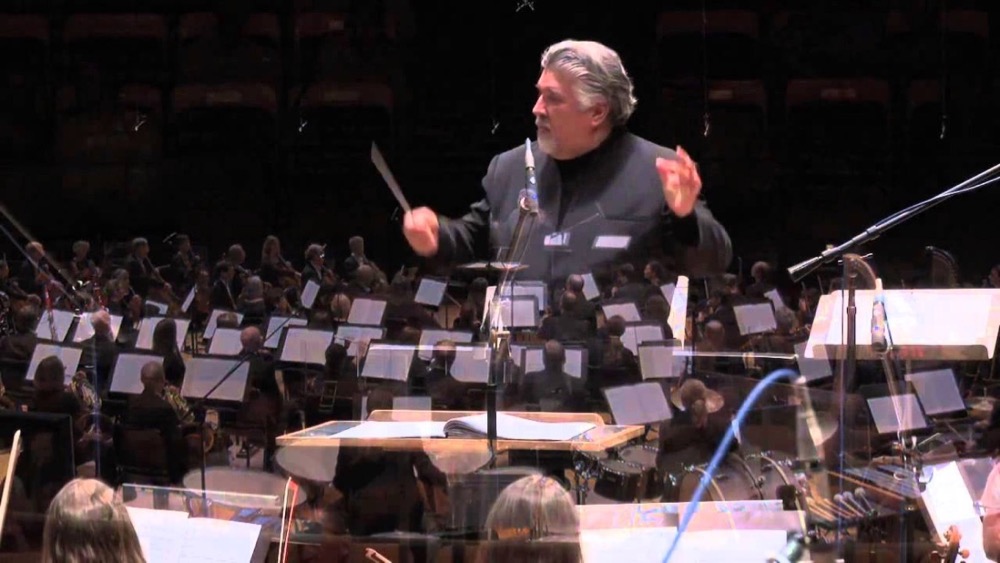 In 1999, the Pittsburgh Symphony Chamber Orchestra was created for Andrés Cárdenes to highlight his multiple talents as conductor, violinist, violist and leader. The Chamber Orchestra enjoyed a remarkable eleven seasons, premiering 15 works and presenting dozens of rarely heard pieces by well-known composers.

In 2006, the Pittsburgh Symphony signed Mr. Cárdenes to a five-year contract to conduct the orchestra in subscription concerts each year.  His programming featured works by Poulenc, Hindemith and Debussy that were either Pittsburgh premieres or had not been performed in over 50 years.  Stepping in suddenly for an ailing Robert Spano, the Pittsburgh Tribune-Review headlined “Cárdenes conducts with epic mastery”. 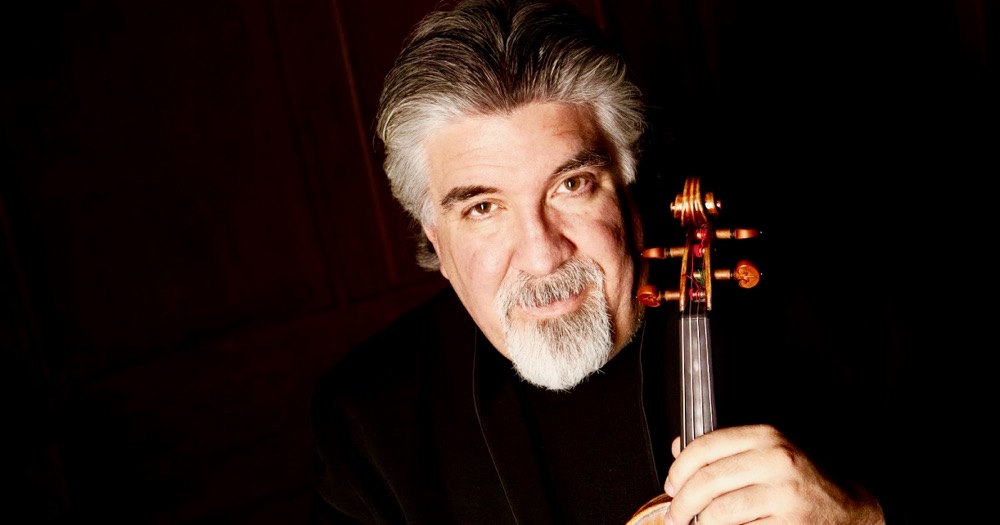 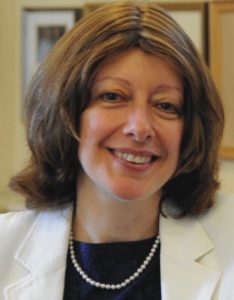 Luz Manríquez was born in Santiago de Chile, where she studied with Elena Weiss at the Escuela Moderna de Música. Upon graduation, she continued to advance her studies under Edith Fisher in Switzerland and María Iris Radrigán at the Catholic University in Chile. Following the completion of her Master’s Degree at Carnegie Mellon University in Pittsburgh, Ms. Manríquez was appointed to the faculty as Artist Lecturer in Piano and Chamber Music in 1992. She was promoted to Associate Teaching Professor in 2004. Since 2012, she has also served as the Co-Director of Collaborative Piano.

Ms. Manríquez has been a regular guest of the Shadyside Concert Series and the Frick Art Museum Series. She has performed with the Nuance Music Ensemble, conducted by former PSO Concert Master, Andrés Cárdenes, as well as with the Chamber Music Project Ensemble at the Andy Warhol Museum. Since its founding in 2004 by cellist Aron Zelkowicz, Ms. Manriquez is also a regular guest with PJMF (Pittsburgh Jewish Music Festival). She also appears yearly at the Carnegie Mellon Faculty Chamber Music Series.

Ms. Manríquez was the pianist in It’s Peaceful Here on Arabesque Records and Made in U.S.A. on Ocean Records, featuring violinist Andrés Cárdenes. She has also collaborated in recordings of works by contemporary composers such as Reza Vali, Marilyn Taft Thomas, Efrain Amaya, Nancy Galbraith and David Stock. Ms. Manríquez can be heard in recordings of oboe and piano music with PSO principal oboist Cynthia D’Almeida. She also has performed alongside flutist Alberto Almarza in Atacama (Nancy Galbraith). In 2015 and 2016 recordings with cellist Aaron Zelkowicz were released – Chamber Music of Joachim Stutchewsky and Leo Zeitlin’s Yiddish Songs and Chamber Music and Declamations, both on Toccata Classics.

In October 2002, Ms. Manríquez participated in the George Crumb Festival in Pittsburgh and recorded Music for a Summer Evening for two pianos and percussions conducted by Maestro Juan Pablo Izquierdo. This recording was released in 2006 and was awarded the Diapason d’Or Prize in 2008 in France.

As a pedagogue, Ms. Manríquez teaches at the Carnegie Mellon Preparatory School of Music, where she serves as acting Director of the Piano Division. Her students are prize winners in National and International piano competitions and have been invited to perform at highly-acclaimed venues such as Carnegie Music Hall (New York City) and in the United Nations. In May 2016, Ms. Manríquez was invited to give Master Classes at Yonsei University and Korea National University of Arts in Seoul, Korea. In May 2017, she inaugurated the first CMU Collaborative Piano Festival in Bogotá, Colombia.

One of Chile’s most distinguished musicians, Ms. Manríquez has appeared as soloist, recitalist and in chamber ensembles throughout the United States, Latin America and Europe. Her artistry, combined with an innate musical sensitivity to others, has made her a sought after chamber musician and collaborative artist. She has been a featured soloist with Cuarteto Latinoamericano, Renaissance City Winds and performs frequently with members of the Pittsburgh Symphony Orchestra. In April 2003, Ms. Manriquez was invited to perform with The Chamber Music Project at the prestigious Bösendorfer Hall in Vienna, Austria for their Bicentennial anniversary Gala Concert.