This year marks the 50th anniversary of the first appearance of the Beatles on American soil–an event etched in the minds of those of us old enough to remember those crazed teenagers witnessing the Fab Four leave an airplane in New York City. To mark this anniversary, Allegheny RiverStone Center for the Arts (ARCA) will present a Beatles tribute performance on Saturday, November 1, in Emlenton’s Crawford Center at 7:00 PM.

Nostalgia will prevail as the likes of John, Paul, George and Ringo take the Crawford Center stage in Emlenton. Well… not really, but close enough to have you believing that you might be in the audience of the Ed Sullivan Show in 1964, when the Beatles made their US television debut.

This will prove to be an affordably priced family night of fun and if you’re of the proper age, you may have to explain to your children how this English band took America and then the world, by storm. Bring Your Dancing Shoes!! Dancing in front of the stage and in the aisles will be encouraged!

The Beatles Tribute Band concert has an interesting back story that highlights the good people that the Allegheny-Clarion Valley region is fortunate to have. At a time of the Blueprint Communities Initiative for the Emlenton, Foxburg and Parker, the re-paving of Ritchey Run and the re-opening of the Emlenton Hill road – the November 1 Beatles Tribute Concert brings together the contributions of many to benefit the arts in our community.

Emlenton residents are already familiar with Barry Louise, an unsung community leader who gets beneficial things done behind the scenes. Barry recognizes that ARCA, the cultural jewel of the region, affords residents the opportunity to take advantage of a wide variety of high quality musical and artistic presentations at family friendly prices without having to travel to the big cities.

“We are fortunate to have this arts organization do so much for our families and children and I wanted to do something to help them”, he says. “I placed a call to my friend Bill Zalewski, one of the Beatles Tribute band members, and he agreed that this would be a perfect event for the larger community and also agreed for the band to perform as a benefit for this arts organization that needs our support.”

The Beatles Tribute Band, from the greater Pittsburgh region, has been delighting audiences for over ten years. A while ago, they moved their commercial performances to a philanthropic, not-for-profit format and decided to perform benefit events for non-profit organizations that serve children in their communities.

Bill Zalewski, a Certified Financial Planner for Merrill Lynch has a passion for childhood wellness issues. An excellent musician himself, Bill found three other like-minded professionals and formed a band specializing in the music of the Beatles. They strive to limit their performances to helping charities and foundations that serve children’s issues raise money. This group donates their services as entertainers at high-level functions for these causes and are well regarded in these circles in the Pittsburgh region.

For this event, Bill and the band are donating their services in support of ARCA and its educational initiatives in the region. Band member Bill Zalewski said: “We are pleased that our performance will help this fine organization and its programs of arts enrichment for children, the community and the region.”

Allegheny RiverStone Center for the Arts is grateful to Barry Louise and the Beatles Tribute Band for their generosity that will support ARCA’s partnership with the AC Valley Schools. Proceeds of this concert will support other family friendly concerts, including the Pittsburgh Youth Symphony Orchestra at AC Valley High School Auditorium on November 15 at 4:00 PM and in the Spring, a residency of the Attack Theatre (dance) in the Jr. and Sr. High School on March 24.

Make your plans now to re-capture your youth or give your children a crash course on a group that altered the musical landscape of the world. 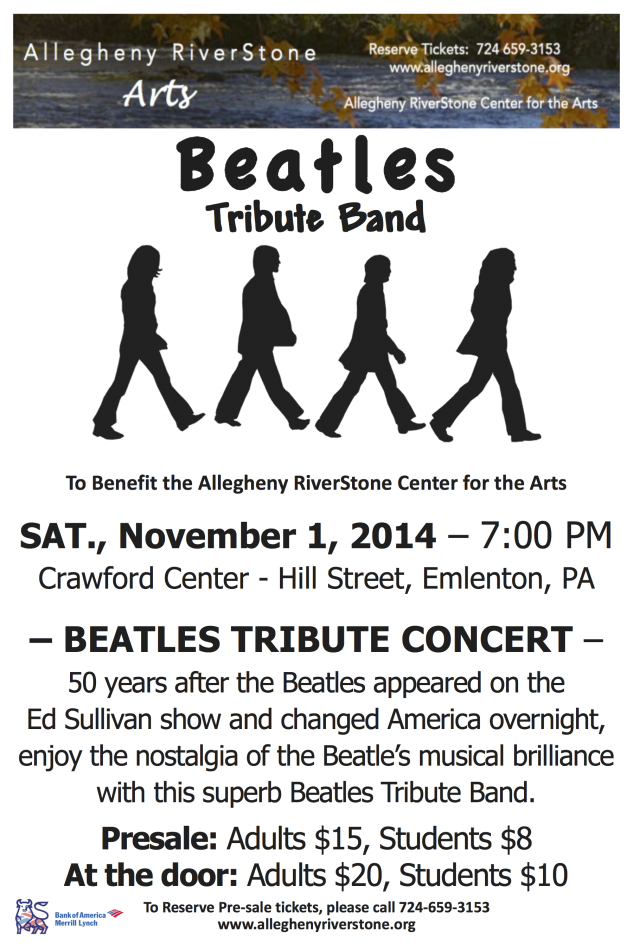