ARCA’s 2014 spring season will open with a concert by the Irish Band CARNIVAL OF SOULS on Friday, On Friday, March 14, 2014 at 7:00 PM at Lincoln Hall in Foxburg.  Leprechaun magic will abound as the highland bagpipes sound the call for the Irish  – and those hopefuls who wish they were Irish – to tap their toes and kick up their heels to celebrate St. Patrick’s Day in Foxburg!  To raise your musical spirits,  join us in Foxburg for this joyous family concert, as we charm the Leprechauns out to bless the audience at the beginning a weekend celebrating all things Irish. 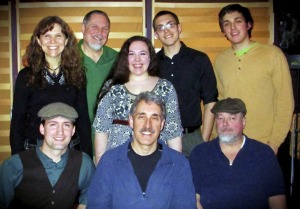 The band members are:

CARNIVAL OF SOULS has been performing traditional and original Celtic music in Western Pennsylvania, eastern Ohio, and West Virginia for nearly twenty years. The group uses a wide variety of traditional and non-traditional instruments to produce a rich range of music that would be at home in a pub in Dublin or a coffee shop in Shadyside. Their first CD, “No Scone Unburned” was released in 1999 and has been acclaimed by Dirty Linen, the international magazine of folk music, and is in the Irish music archives in Dublin. They can be heard at a variety of venues in the tri-state area.