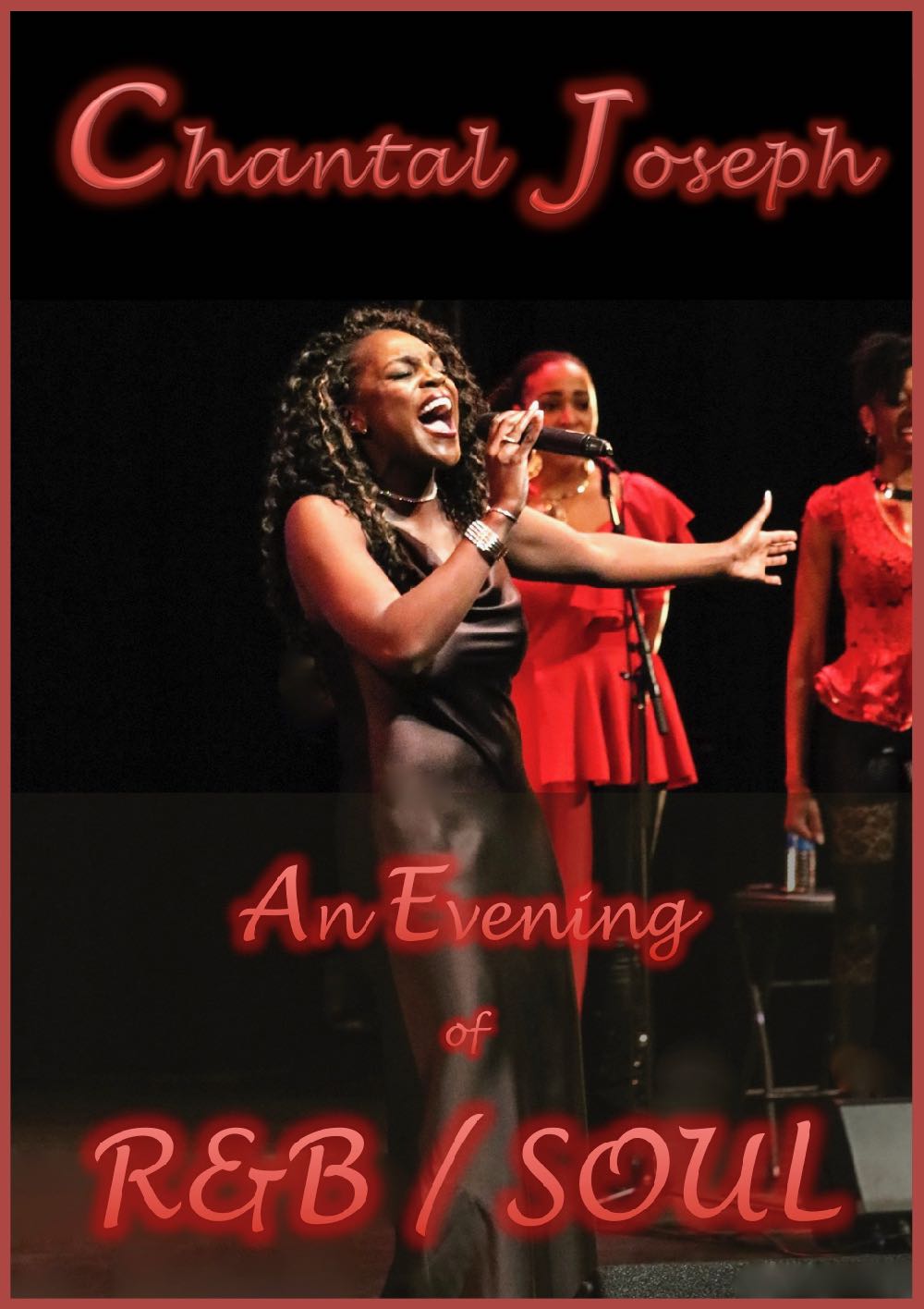 A feast for the eyes, described as ‘electric’ and ‘a force of nature’, vocalist CHANTAL JOSEPH makes her Allegheny RiverStone Center for the Arts debut in AN EVENING OF SOUL and R&B on Saturday, June 12 at 7:30 PM – with her trio including world renowned jazz and funk bassist, Dwayne Dolphin, Howard Alexander on keys and Dennis Garner on drums. ARCA is grateful for the generous gift of Linda and Michael Bradley who have sponsored Chantal’s concert. 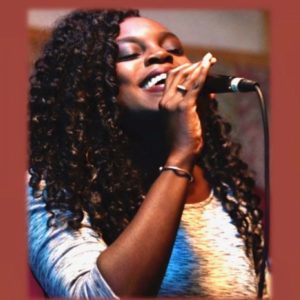 Dazzled you will be by her gorgeous voice, musical passion and inner-and-outer beauty, as she performs with her trio musical favorites from the 70’s, 80’s, 90’s and songs from artists Anita Baker, Roberta Flack, Stevie Wonder, Donny Hathaway, Aretha Franklin and Nora Jones – plus jazz favorites. This will be a night to remember in Lincoln Hall!

Originally from Cape Cod, Chantal has performed at the Newport Jazz Festival, Indiana Jazz Festival, the Boston Pops, and the Cape Symphony, touring with the Perry Rossi Orchestra.  Since moving to Pittsburgh, she is a favorite at The Fairmont Hotel, Eddie V’s, The Brick Shop and Con Alma. Enjoy her singing Aretha Franklin’s Until You Come Back to Me recorded live at The Fairmont with Daniel May at the keyboard.

CHANTAL is a force of nature. Anyone who has seen her perform will testify to that. They might also use adjectives like ‘high-energy’, ‘electric’ or offer comparisons to Tina Turner and Stephanie Mills.

But to really understand CHANTAL, you’ll have to come see for yourself in Foxburg’s Lincoln Hall. For her, music is a life-long journey in an adventure that has already had her share the studio and stage with the likes of Kenny Loggins, Dwayne Dolphin, Roger Humphries and Grace Kelly.

But now more than ever, CHANTAL is determined to leave her own mark on the music industry. Where others would give in to auto-tuned tracks and fashion trends, CHANTAL’S raw energy and fearless execution cut through the noise with the expressiveness and sensuality of yester year’s greats, but with a 21st Century twist that is necessary to drive the dialogue of today’s society. She’s more than just a feast for your eyes and music to your ears: CHANTAL is an experience, and you’re invited to experience her magic on Saturday, June 12 at 7:30 PM. 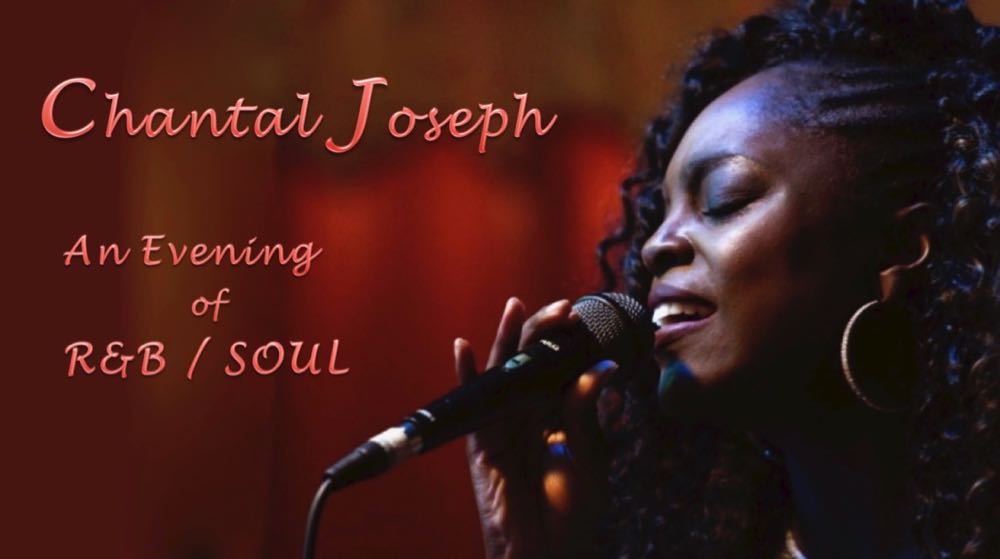 ARCA is presenting concerts in compliance with CDC and Pennsylvania COVID Guidelines. Please refrain from attending if you are ill.

Masks are OPTIONAL. Hand sanitizer will be available.

Chantal Joseph’s concert will be the first since the change in PA COVID guidelines to allow full capacity seating.

Tickets are Adults $20, Students $5 – and may be purchased online here. 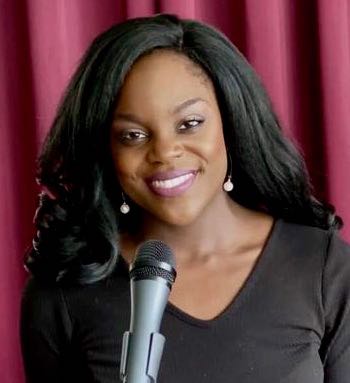 And what an inspiration Chantal is! While versatile in her craft as a performer, studio recording artist, and songwriter, she also is passionate about community outreach and giving back. Chantal’s motivation lies in spreading positivity, inspiration, and empowerment to young and old alike. She is a Teaching Artist with the Pittsburgh Cultural Trust and teaches piano and voice at the Afro-American Music Institute in Homewood. 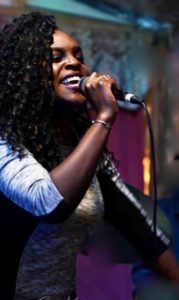 In April of 2020, Chantal was featured in a story in the Pittsburgh Post Gazette “In Focus: Pittsburgh Jazz in the age of Covid 19”.  She was interviewed along with several acclaimed Pittsburgh musicians as they discussed their experiences and thoughts regarding the challenges of this time as well as its effects on the music community.

All of this is built on Chantal’s multi-faceted gifts as a dynamic musician, teaching artist, and business entrepreneur.  A Massachusetts native, she studied music business at Boston’s Northeastern University. All of this Chantal brings to young musicians and students at the Afro-American Music Institute and Pittsburgh education system through the Pittsburgh Cultural Trust.  How blessed those students are to have Chantal’s inspiration! 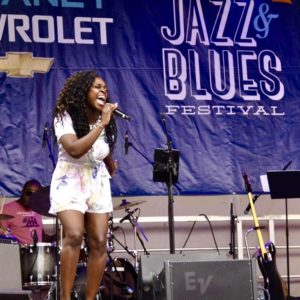 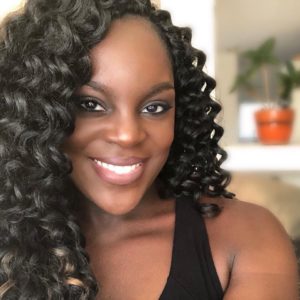 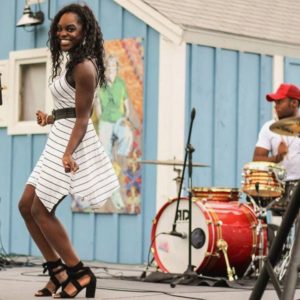 You will often find Chantal performing professionally all across the U.S. with her own band as well as many acclaimed local and national artists. 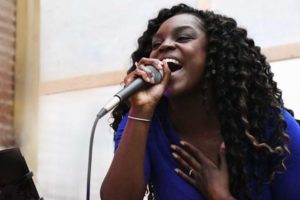 Chantal has performed at the Newport Jazz Festival, Indiana Jazz Festival, the Boston Pops, and the Cape Symphony, touring with the Perry Rossi Orchestra.  Since moving to Pittsburgh, she is a favorite at The Fairmont Hotel, Eddie V’s, The Brick Shop and Con Alma.

But to really understand CHANTAL, you’ll have to come see for yourself in Foxburg’s Lincoln Hall. She’s more than just a feast for your eyes and music to your ears:  CHANTAL is an experience, and you’re invited to experience her magic on Saturday, June 12 at 7:30 PM. 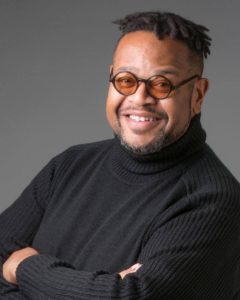 Dwayne Dolphin is a virtuoso, world renowned jazz and funk bassist who is regarded as a master instrumentalist, no matter whether he is playing upright, electric or even the “piccolo” bass.

Beginning to play locally in Pittsburgh at the age of 15 with local legend Roger Humphries, after high school Dwayne joined the band of the Grammy Award-winning trumpeter Wynton Marsalis.  Wynton said that Dwayne has “impeccable musicianship, a beautiful attitude and a workman-like disposition that is essential to great bass playing.”

Throughout his career, Dolphin has had the opportunity to play and record with the “Who’s Who” of national musicians, such as Nancy Wilson, Melba Moore, Fred Wesley, Abby Lincoln, soul saxophonist Maceo Parker and hard bopper Stanley Turrentine. Dwayne is a mainstay standout in the jazz scene of Pittsburgh, working with  local greats such as Roger Humphries, Pete Henderson and Carl Arter.

Dolphin’s discography is extensive with eight albums as a leader or co-leader and more than a dozen as a sideman to many, including Nancy Wilson, Fred Wesley and John Hicks.

Dwayne Dolphin’s Indigenous, his eighth solo album release spanns smooth funk, jazz, world, Brazilian and many other styles, bringing “something for everyone” to the table.

The reviewer of his his first solo album in 1993 Portrait of Adrian observed that “Dolphin’s tone is round and full, and he’s got an agile technique. Certainly the late Paul Chambers must have been an influence; like Chambers, Dolphin tends to place his unfussy improvisations in the instrument’s lower register. Consequently, his lines are solidly melodic and generally to the point.”

A member of the Pittsburgh Jazz Hall of fame, Dwayne still tours all over the world both as a solo artist and as a sideman.  Most notably he is the bassist in the New JB’s (the band that backed James Brown). Dolphin also has mentored current jazz star, trumpeter and composer Sean Jones.

What is it to be a virtuoso?  Whether it is funk, jazz, smooth, easy listening, traditional jazz, or almost any other genre, Dwayne plays it all on his electric bass, piccolo bass, and acoustic bass. 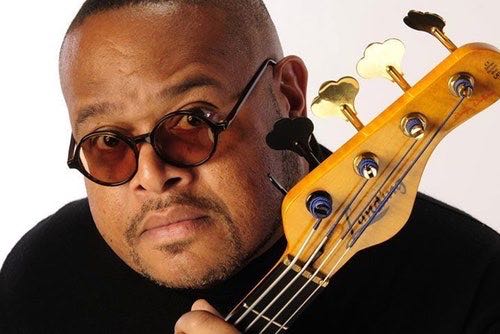 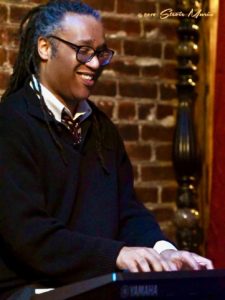 One of Pittsburgh’s finest jazz and soul keyboard players, Howard Alexander hails from the Blackridge area of Wilkinsburg, PA and grew up in a home filled with jazz, rhythm & blues, and funk, taking up the piano when he was 15.

A graduate of Duquesne University, for twenty-seven years Howard has appeared as a sideman or headliner at clubs and concert venues from Pittsburgh to Monaco, performing with the Pittsburgh Symphony Orchestra, Poogie Bell, Ciaro, and the likes of Stanley Turrentine.  He is Artistic Director of the Afro-American Music Institute, having taught piano there since 1994.

Alexander cites a trio of mentors:  Dr. James Johnson Jr. of the Afro-American Music Institute in Homewood; guitarist Jimmy Ponder, with whom Alexander had his first professional gig at the age of 17; and Nelson Harrison, former trombonist with the Count Basie Orchestra. 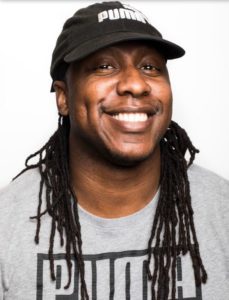 Jazz and Funk Drummer Dennis Garner is a native of Pittsburgh – where his musical background was grounded in gospel music and drumming. As he grew up, he continued to expand his musical interests to different genres, saying he wanted to learn every musical genre he possibly could.

While his love of music only grew as he got older, a lot of his passion for music came from his experiences as a touring performer; he hadn’t had any formal training. When he enrolled in West Virginia University as a biology major, he auditioned for private drum instruction with Al Wrublesky. Dennis credits Wrublesky, who taught in the music department and also subbed with the Pittsburgh Symphony Orchestra at the time, with teaching Dennis about the language of drumming and the academia behind it.

After college, Dennis continued touring and recording music across the country. He also owned his own production company, where he taught private drum instruction for 10 years.

In 2015, while working for the Greater Pittsburgh YMCA, Dennis was referred to the Pittsburgh Cultural Trust through the Gateway to the Arts program. From there, he was offered a temporary workshop position to teach drums. This workshop position allowed Dennis a new opportunity to teach in the classroom — something he hadn’t had the chance to do before.

Dennis Garner describes himself as being “connected to and with” the Pittsburgh Cultural Trust for over a decade, both in teaching and performing capacities. A resident artist in the Trust Arts Education department, Dennis has taught a variety of classes with a range of musical focuses. While he has taught DJ classes and dance classes, his specialty is in percussion and drumming, bringing styles of drumming such as West African, Middle Eastern, and Caribbean percussion to the classroom.

Since joining the Trust as a teaching artist and as a performer, Dennis said he has found a community within the Trust. He says that his experience, particularly in being surrounded by fellow artists, has allowed him to expand his skillset and challenge himself as well. 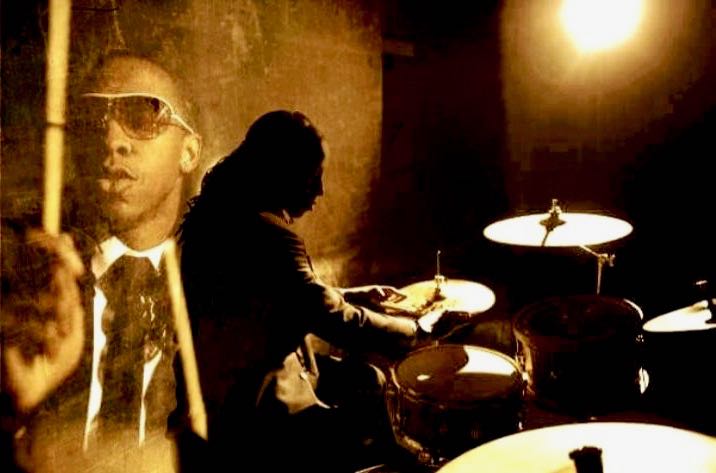