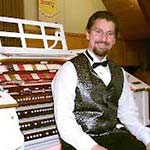 The world renowned organist, David Wickerham, will make a return appearance to work his special magic on the Mighty McKissick Wurlitzer Theatre Organ in Foxburg’s Lincoln Hall on Friday, September 5 at 7:00 PM. Allegheny RiverStone Center for the Arts is pleased to announce that David’s performance will honor the 80th birthdays of Dr. Arthur Steffee, ARCA Founder, and Mrs. Sally McKissick, the wife of Paul McKissick, who lovingly restored this treasure in Lincoln Hall.

David is recognized as one of the most superb performers on Theatre Organs and most notably for his incredible improvisational skills. He will take a request list from audiences during intermission and then weave an uninterrupted tapestry of tunes for the duration of the program. There isn’t a melody that this artist doesn’t know!

When he moved to Arizona in 1976, he became Associate Organist at the famous Organ Stop Pizza Restaurants in Phoenix, Mesa and Tucson. While in Arizona, he continued his musical studies with Roseamond Crowley, one of the few remaining descendants of the Louis Vierne line of organists. He attended the University of Arizona in Tucson on a full scholarship, pursuing classical organ studies for six years with Dr. Roy Johnson.
In 1984, Dave moved to the Chicago area to become Staff Organist at Pipes and Pizza in Lansing, Illinois. In addition to his performance there, he concertized frequently, as well as ministering musically and serving at various churches.

Click the Wurlitzer menu item above to learn about the history of the Mighty McKissick Wurlitzer and Paul McKissick. Then, reserve your seat for this special birthday celebration concert featuring an artist who delights audiences both young and old. Once you hear the majesty and capability of a Theatre Organ, you will be hooked!