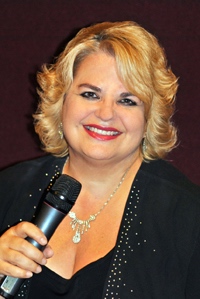 One of the preeminent singers in the Pittsburgh jazz and cabaret scene, Judi Figel will share her extraordinary voice – backed by superb musicians in her Jazz Trio – to create an unforgettable evening of cabaret singing and dance music in Lincoln Hall’s romantic nightclub environment.

Known for her extraordinary voice and musicianship which take  audiences on a ride from the blues and jazz standards to musical theater and rock, Judi’s singing will charm, soothe and rock your soul.  As has been said of Judi’s artistry, “This singer has the pipes!”

At home in front of an eighteen piece band or at the piano herself, Judi’s singing is tasty, artistic, powerful and soulful.  You will not want to miss this opportunity to hear Judi right here in the Allegheny River valley in a romantic, candle lit night of cabaret and dancing in Lincoln Hall.  Wine and cheese are offered.   To reserve a table or tickets, call 724 659-3153.

Judi Figel is a celebrated singer in the jazz scene and musical nightlife in the Pittsburgh area. A dynamite singer and great pianist Judi performs a wide variety of music styles. Her repertoire includes pop, jazz, country, light rock, Broadway and standards. Her fun-loving personality along with strong vocals will surely captivate and delight!

Moving gracefully from performing as a solo singer/pianist to fronting an eighteen piece big band, Judi has performed with her “Judi Figel Duo/Trio” in countless public venues in the Pittsburgh area and performed for many years at private venues with the dance band “Starfire”.   Judi has done pre-shows at the Post-Gazette Pavilion and the Chevrolet Amphitheater for Bobby Vinton, John Fogerty, John Cougar Mellencamp, Earth, Wind and Fire, Chicago and Steely Dan.

A featured vocalist with the Trinity Jazz Orchestra big band, Judi has performed at the Pittsburgh Three Rivers Regatta and the Byham Theater. Judi also has been a much sought after soloist for wedding ceremonies and receptions in and around the Pittsburgh area since 1980. Judi has recorded as a vocalist on several local artists’ albums and has done several commercial spots.  Judi is currently in production on a solo CD project.

Originally from the West Mifflin area, Judi now resides in Monroeville. She earned a Bachelor of Music at Oberlin College as a piano major/voice minor specializing in Music Education and a Master of Music Education at Duquesne University. Judi is a retired music instructor from the Plum Borough School District.