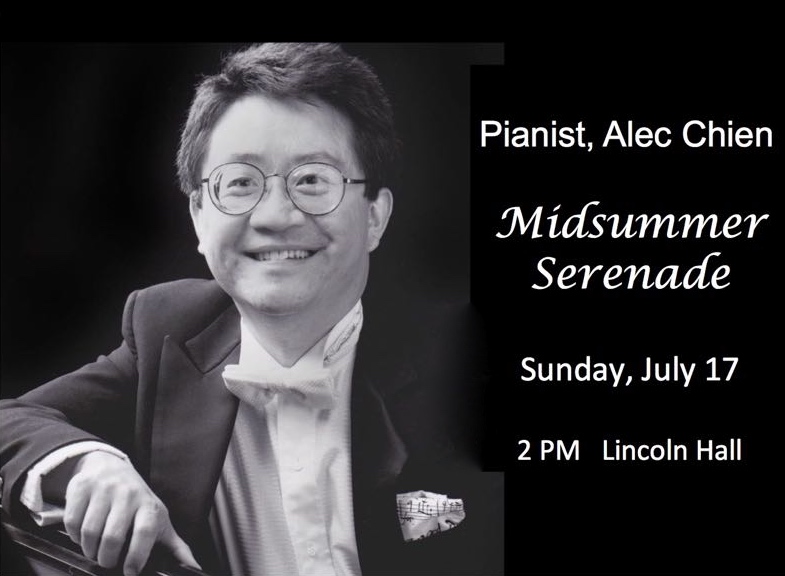 Enjoy a refreshing midsummer afternoon in the air-conditioned comfort of Lincoln Hall on Sunday, July 17 at 2:00 PM as renowned Steinway artist and international competition winner, Alec Chien, performs a delightful program of powerful piano classics on the newly refurbished Steinway.  His program will feature major works for the piano –  Robert Schumann’s Fantasy in C Major, the Transcendental Etude “Harmonies du Soir”, the virtuosic Hungarian Rhapsody, No. 12 by Franz Liszt, and the iconic Pictures at an Exhibition  by Modest Mussorgsky.

The audience is invited to view Red Brick Gallery’s own ‘pictures at an exhibition’ and attend the opening reception for a multimedia Exhibit “Impressions of Nature:  An Artistic Quartet” featuring watercolorists Donna Edmonds and Angela Taylor Hardwick, potter Cheri Lee Anderton-Yarnell, and oil painter Kathleen G. Chovit from 4 – 6:00 PM immediately after the concert.

Western Pennsylvania is blessed to have claimed Alec Chien as its artistic native son, as he served as Artist-in-Residence and Professor of Music chairing the Music Department at the Allegheny College in Meadville, PA from which he retired in 2015.  Since 2013, Chien has served on the piano faculty of Carnegie Mellon University School of Music, where he teaches Piano Literature & Repertoire for graduate piano majors.  Chien also is a frequent chamber music collaborator with groups such as the Alexander String Quarter and has recorded with violinist Sergiu Schwartz works by Alexander von Zemlinsky and as well 24 Preludes of Ruth Schonthal for the piano. 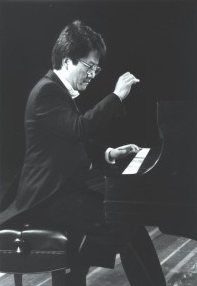 Among the major symphony orchestras which he has been featured as soloist are the Philadelphia Orchestra, Pittsburgh Symphony, St. Louis Symphony, Utah Symphony, Atlanta Symphony, Buffalo Philharmonic, New Zealand Symphony, American Symphony and Hong Kong Philharmonic. He was one of the 25 Steinway artists performing at the Gala Concert at Carnegie Hall in New York City to celebrate the piano company’s 135th anniversary as well as its 500,000th piano. That commemorative piano has been brought to Allegheny twice for his solo recitals. Chien is also actively performing in chamber music, having appeared with members of the New York Philharmonic, the Philadelphia Orchestra as well as the Alexander String Quartet, the Cavani String Quartet and an upcoming performance with the Ariel Woodwinds Quintet.

Chien is Artist-in-Residence and Professor of Music chairing the Music Department at the Allegheny College in Meadville, Pennsylvania where he was declared “adopted native son” by the mayor of Meadville. Having concluded a seven-concert series performing all 32 Ludwig van Beethoven Piano Sonatas, he endeavors to present an eight-concert series devoting to the major works of Franz Schubert and Frederic Chopin. A firm believer in bringing music to Meadville and its surrounding communities, where he was honored as the city’s “adopted native son,” Chien has brought his music to the Crawford County school districts, performing and speaking to students in both the high school and elementary school levels. His recitals have also been part of the Bicentennial Celebrations of the cities of Meadville and Erie as well as currently, Allegheny College in 2015.

In the Fall of 2013, Alec joined the piano faculty of Carnegie Mellon University School of Music teaching Piano Literature & Repertoire for graduate piano majors. While he continuing at Carnegie Mellon, Professor Chien has retired from his post at Allegheny College. Since then, he has been chair of the Board of Directors of the Meadville Neighborhood Center, a non-profit organization that strives to provide opportunities in engaging the Meadville community in the success of its students and neighbors. Active in his community, Chien is involved in local efforts such as Partner-in-Education, the Neighborhood Family Centre and Grief-Relief and Other Workshops (GROW). He and his wife, Brenda, have three daughters – Brianna, Mikayla Trousdale with her husband Joel and Bethany Fields with her husband Michael.