In 2020, Allegheny RiverStone Center for the Arts proudly brings into the Allegheny-Clarion Valley Schools a day of Educational ArtReach enrichment provided by seasoned teaching artists in a wind quintet from one of Pennsylvania’s leading chamber music ensembles, The Renaissance City Winds.  Known for promoting the fine art of wind chamber music since 1975, The Renaissance City Winds have been hailed in the press for being “Nothing short of brilliant” [Olean Times Herald], “Playing with excitement, musicality and daring” [WQED-FM], “Expert wind players… attractive program… enjoyable” [New York Times]. 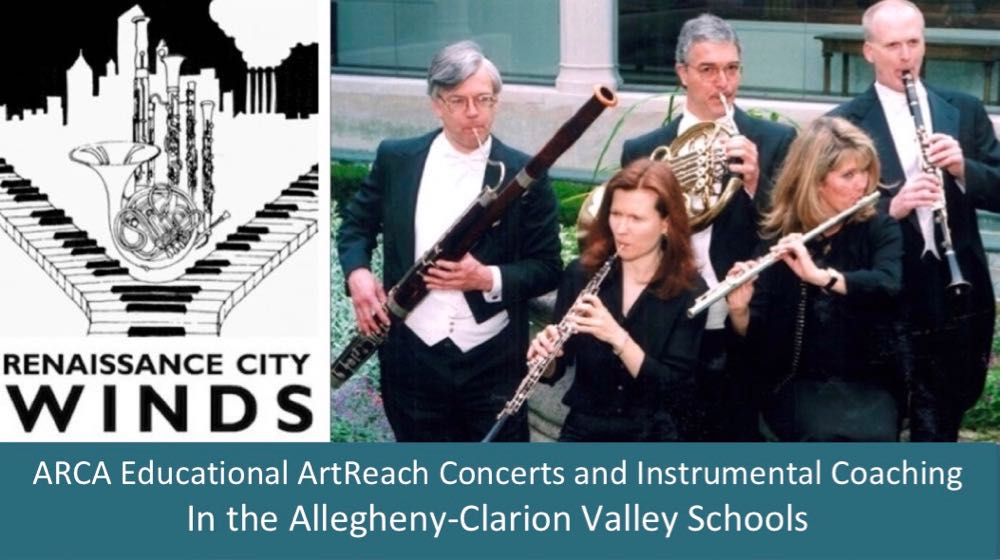 These seasoned and award winning Teaching Artists will conduct small classroom workshops for K-6 and two  assembly concerts for K-12.

Seasoned educators in the public schools, the Renaissance City Winds have been giving school concerts and extended residencies since their very first season in 1975-76.  The ensemble is a juried roster artist with the Pennsylvania Council on the Arts’ Arts-in-Education program.  They have presented one to two week long residencies, including lecture demonstrations for assemblies and/or classes on themes as diverse as American music of various ethnic backgrounds and music by women composers, with study guides available for elementary schools so teachers can prepare their students.

ARCA’s arts education program fulfills its mission as a non-profit organization, demonstrating its commitment to contribute to the future of the Allegheny-Clarion valley community through the arts education of its young people. ARCA is grateful for its partnership with the A-C Valley School Board, administrators, faculty and music specialists in making this program possible.

The Renaissance City WINDS musicians will perform three small workshops for Allegheny-Clarion Valley Elementary students in grades Pre-K to 6 in the morning, prior to an assembly concert for all elementary students in the Elementary School gymnasium. In the afternoon they will move to the Jr. and Sr. High School to perform an assembly concert for grades 7 – 12 in the High School Auditorium.

The Renaissance City WINDS are looking forward to performing for every student in the school system from Pre-K to Grade 12.

Designed specifically as an arts education resource for A-C Valley students, The Renaissance City WINDS assembly concerts and workshops are not open to the public. Because there is no admission for any residency events, ARCA relies on contributions from the community to support its art education program in the A-C Valley Schools. Anyone interested in making a contribution or becoming an ARCA member may do so on this site.

In advance of their residency, elementary music teacher, A-C Valley choral director and musical theatre director Jennifer Lowrey will prepare students in K-6 for the small workshops, introducing them to the instruments in the wind family and some of the music the Renaissance City Winds will be performing in their assembly concert.

Jennifer Lowrey said of ARCA’s arts education program,“The students at A-C Valley have a love for the arts. The programming ARCA has brought into our district over the years has nurtured that love and opened a window into a world of professional artistic excellence that many students otherwise might not get a chance to experience. It also has given them a glimpse of the possibility of who they could become as an artist.”

Karen Hetrick, Elementary band director and general music teacher said of ARCA’s program, “The students and faculty at A-C Valley Elementary School are so thankful for the arts opportunities that ARCA has brought to our school. Students have been exposed to professional singers, dancers, instrumentalists and actors of the highest caliber. My students are always so excited and enthusiastic to play after watching and listening to these wonderful groups. The elementary band students especially love interacting with the performers in the small group settings both during the day and in the after-school sessions. Thank you so much for the continued artistic enrichment you provide to our students and community.”

A-C Valley Band Direction, Scott DiTullio, expressed his delight that the Renaissance City Winds will be performing an assembly for the Jr. and Sr. High School on March 3:  “Musicians grow, in much the same way as athletes.  Musicians train daily for perfection of their instrument.  As they perform with others, musicians have to be at the highest possible level.  They cannot make a mistake.  One wrong note or rhythm in music, creates a major problem for the entire group as they are performing.  Unlike in basketball, if a player misses a free throw, the rest of the team is there to make up for it.  That doesn’t happen in music.  The role of each musician is vital to the entire group, it takes all of them to be 100% accurate all of the time.  Throughout the last several years we have had many university band directors work with our students to help get us to the next level.  Having the seasoned teaching artists and dynamic professional musicians in The Renaissance City WINDS on our campus is an added bonus!  They are inspiring performers and experienced teachers who will be working with the students to help them understand more of what their individual responsibilities are as a musician and as a member of the band.  A special thank you to ARCA for bringing these amazing programs to our students and community.”

About The Renaissance City Winds 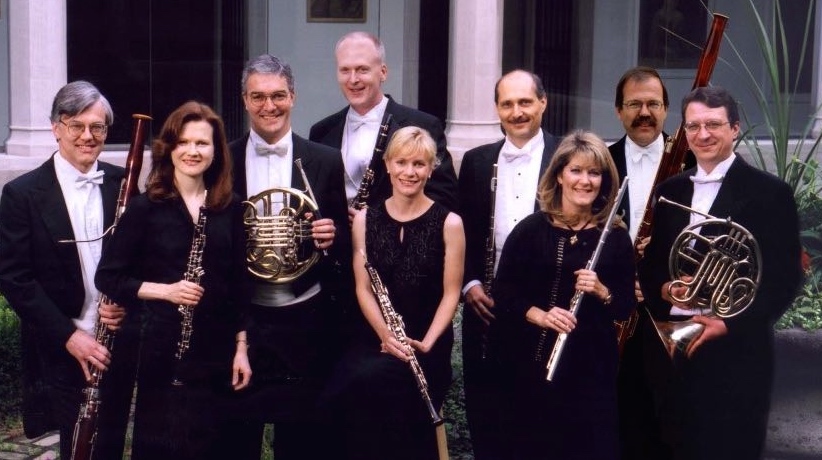 For 41 seasons The Renaissance City Winds have brought the warmth and joy of chamber music to Pittsburgh audiences. Varying in instrumentation and size from 3-10 musicians, the Renaissance City Winds is named after Pittsburgh’s nickname and dedicates itself to performing and recording the finest music for wind instruments. It has become one of Pennsylvania’s foremost chamber ensembles since its founding in 1975. 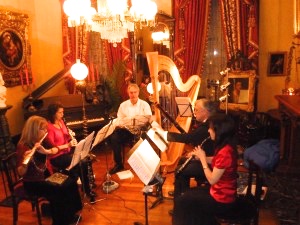 The Winds perform concert in their annual concert series at their residency host, Carlow University, and in unique venues and elegant private homes in Pittsburgh.  In addition to the typical small concert hall of 150-600 seats, the Renaissance City Winds have performed in libraries (including the world’s first Carnegie Library), a working steel mill, gardens, Victorian mansions and modern private homes, outdoor amphitheaters, and churches and chapels of all sizes, shapes, and vintages.

The Winds have toured throughout the East with appearances at Carnegie Hall (NY), the Kennedy Center (DC), Blossom Music Festival, and the Pennsylvania Governor’s Residence. Originally a Pittsburgh woodwind quintet, the “Renaissance City Woodwind Quintet,” the group increased its collaborations with guest artists and the frequent performance of octets and decets – most concerts used more than five players – and the ensemble officially expanded and shortened its name in 1988. 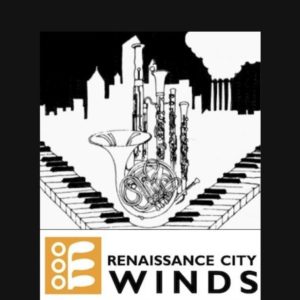 While it performs music from the sixteenth century to the present, the group has received special recognition for its devotion to American music. The Renaissance City Winds have been a tireless proponent of new music for four decades.  The ensemble has commissioned many works from contemporary composers, and performed older treasures it has researched from the Library of Congress, the Harmonists, and the Moravian collection.  In 2001 it won one of MEET THE COMPOSER’s community residency grants, one of only four awarded nation-wide that year.

Not only have The Winds commissioned dozens of pieces and premiered over 100, but they also make a real effort to give second and third performances of worthwhile works; far too much fine music gets set aside after its premiere! A central part of this effort has been to perform not just the music of famous people, but to give a voice to young or obscure composers whose work deserves to be heard, especially those from western Pennsylvania.

The ensemble has captured nationally-competitive awards and grants from Chamber Music America, the National Endowment for the Arts, MEET THE COMPOSER (now merged into New Music America), the Alice M. Ditson Fund, and the Aaron Copland Fund for Music.

Seasoned educators in the public schools, the Renaissance City Winds have been giving school concerts and extended residencies since their very first season in 1975-76.  The ensemble is a juried roster artist with the Pennsylvania Council on the Arts’ Arts-in-Education program.  They have presented one to two week long residencies, including lecture demonstrations for assemblies and/or classes on themes as diverse as American music of various ethnic backgrounds and music by women composers, with study guides available for elementary schools so teachers can prepare their students.

Working with sixth to ninth grades the Renaissance City Winds have conducted composer projects with students writing melodies and organizing them in logical form.  They also have presented Arts-Integration Lectures, for example, on American Music in a history class, Arts Management and Marketing in a business class, The Physics of Music in a physics or general science class and How to Listen to “Classical” Music  in general music class.  The Winds also have coached students in a variety of small groups and conduct master classes. 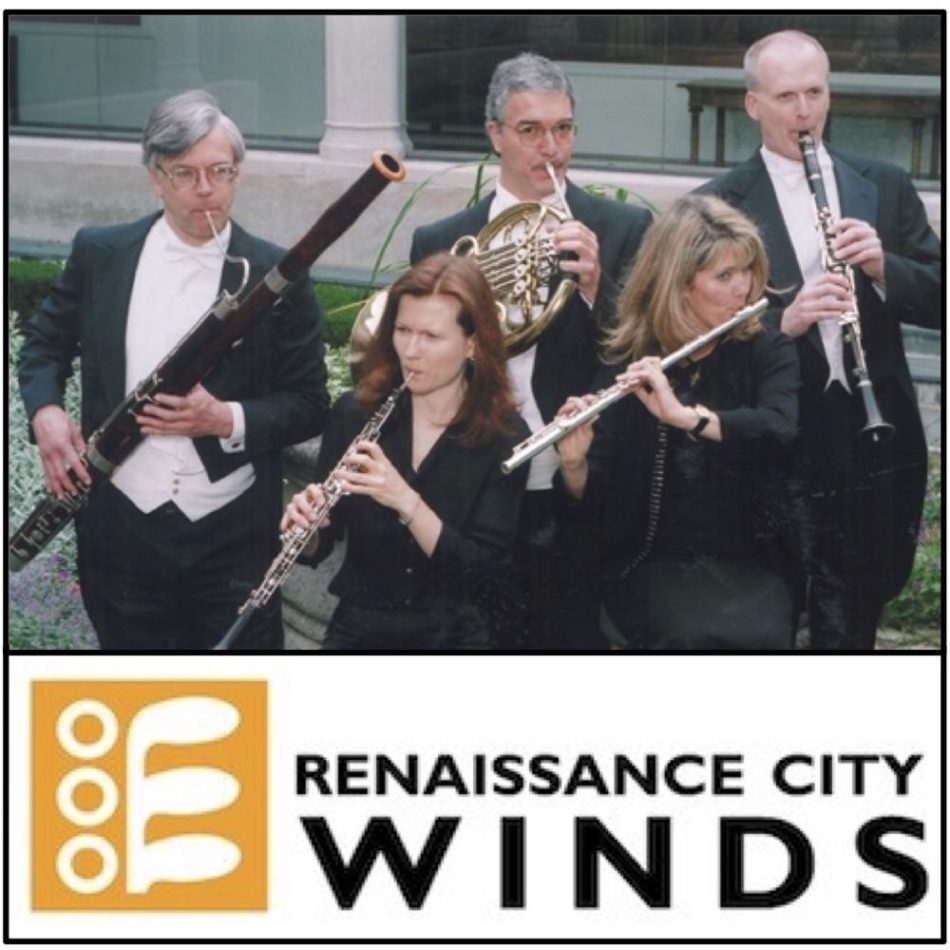 In School Sessions for students and teachers - Elementary and Jr./Sr. High School