At the conclusion of ARCA’s Educational ArtReach residency, The Music That Makes Us Dance, in the AC Valley Elementary School, on Thursday, September 25 “A Dance Concert for the Whole Family” in the Allegheny-Clarion Valley High School Auditorium will present dances from around the world performed by  Susanne Ortner-Roberts, Clarinet & John Marcinizyn, guitar  and dancers Renee Smith, Jamie Murphy and Joe Nickel from the Murphy/Smith Dance Collective

Some of the most joyous, uplifting and effecting music ever written has been created for the dance.  The impulse to move and respond to rhythm is deeply imbedded in our cultural DNA.

Allegheny RiverStone Center for the Arts is utilizing the universal language of dance to engage students in the Allegheny-Clarion Valley Schools in the wonder of music and the dance – an expression of the impulse of life – and involving their hearts, minds and bodies in learning through the arts.

ARCA is presenting an Educational ArtReach program in partnership with the Allegheny-Clarion Valley Schools called THE MUSIC THAT MAKES US DANCE, bringing musicians and dancers to AC Valley for students K-12 in workshops and assembly concerts  as part of a week long residency.

The residency culminates in a concert for the whole family on Thursday, September 25, at 7:00 PM in the Allegheny-Clarion Valley High School Auditorium with  Susanne Ortner-Roberts, Clarinet & John Marcinizyn, guitar  – with Renee Smith, Jamie Murphy and Joe Nickel from the Murphy/Smith Dance Collective

Susanne Ortner-Roberts, Clarinet & John Marcinizyn, guitar  – with Renee Smith, Jamie Murphy and Joe Nickel from the Murphy/Smith Dance Collective as they perform Waltzes, Polkas and Tangos as well as their own eclectic blend of Gypsy Jazz, Latin, and Klezmer. You’ll be enchanted by the mesmerizing sounds of New Orleans, Paris, Odessa, Brazil, that will surely get yours toes tapping and heart singing.

This concert is popularly priced with discounts for families.  $15 for Adults, and Parents and Students $5 per person.

The week of Educational ArtReach focus on music and the dance will begin on Monday and Tuesday, September

22-23, when the Pittsburgh dance educator and early childhood educator, Laurie Tarter, will present two days of movement workshops in the AC Valley Elementary School.  Earlier in the day on September 25, Ortner-Roberts and Marcinizyn will present three small in-school workshops for every student K-6 and as well as assembly concerts for the Elementary and Junior and Senior High Schools.  All performances will feature dancers dancers Renee Danielle Smith and Joe Nickel from the Murphy/Smith Dance Collective as part of ARCA’s Educational ArtReach program.  This program is made possible by a grant from the Pennsylvania Council on the Arts. 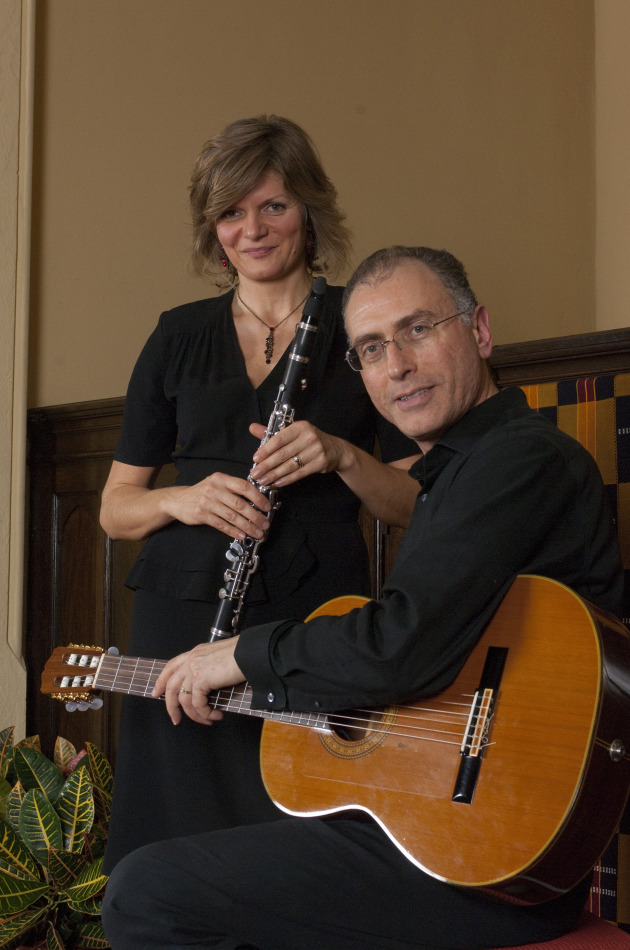 guitar virtuoso John Marcinzyn will perform an eclectic blend of Gypsy Jazz, Latin, Klezmer, and more. You’ll be enchanted by the mesmerizing sounds of New Orleans, Paris, Odessa, Brasil, and other places that will make your soul soar, and your feet move!

In addition to the four dances performed by the Murphy/Smith Dance Collective, during the evening concert the Ortner/Marcinizyn duo also will perform their arrangement of Liebesfreud by Fritz Kreisler/Django Reinhardt, where “The Joy Of Love” takes on its Gypsy Shoes: The great Gypsy Jazz guitarist Django Reinhardt was inspired by Kreisler’s tune to Jazz it up. In this arrangement the old merges into the new. Tico Tico (Zequinha de Abreu) the famous Choro tune, Tu Vuo Va L’Americano (Italian Gypsy Jazz) and beautiful tunes from the Great American Songbook, such as My Romance (Rodgers/Hart) will round out the program with a flourish and lots of heart.

Ortner and Marcinizyn will be joined by dancers from the Murphy/Smith Dance Collective.   Founded in 2011 by Pittsburgh dancers and choreographers, Murphy/Smith Dance Collective’s (MSDC) Renee Danielle Smith and Jamie Murphy engage their audiences through contemporary dance work inspired by the human experience. Through exploration of the expressive potential of the human body, MSDC creates work with passionate fervor, driven by athletic phrasing, accessible through gestural simplicity.  Pittsburgh dancer and choreographer Joe Nickel will be dancing with Renee Danielle Smith in MSDC’s Foxburg performances.

The German Newspaper Augsburger Allgemeine states that she is “a musician par excellence, capable of moving you deeply“. Susanne is a graduate of the Leopold Mozart Conservatory, and the University of Augsburg. She previously taught German literature, language and music. Following an invitation by the University of Pittsburgh in 2006, she has been accompanying Pittsburgh area Holocaust Survivors at schools and Universities creating the musical framework for their stories.

“Susanne Ortner […] seems to be capable of everything (…) Warm, soft tones if necessary, rapid, speedy passages and in addition to this the challenging embellishments, typical for klezmer music, all at breakneck speed and with an almost unbelievable ease.“ Donau Zeitung. 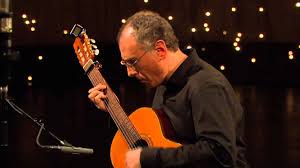 Pittsburgh based guitarist, composer, banjoist John Marcinizyn performs frequently as a soloist, with the Ferla-Marcinizyn Guitar Duo, contralto Daphne Alderson, Duo Cieli (flute and guitar duo), violin and guitar duo, and groups ranging from The Bach Choir of Pittsburgh to Billy Price. He is also a member of The Red Hot Ramblers (Dixieland jazz). His versatility as an acoustic and electric guitarist allows him to perform in many styles including classical, jazz, flamenco, rock, blues, and folk. John has also performed guitar and banjo for many theater companies including Quantum Theatre, where he wrote and performed a flamenco score for The Red Shoes and a Blues score for El Paso Blue. His playing can be heard on eight CDs and one DVD and on his website. 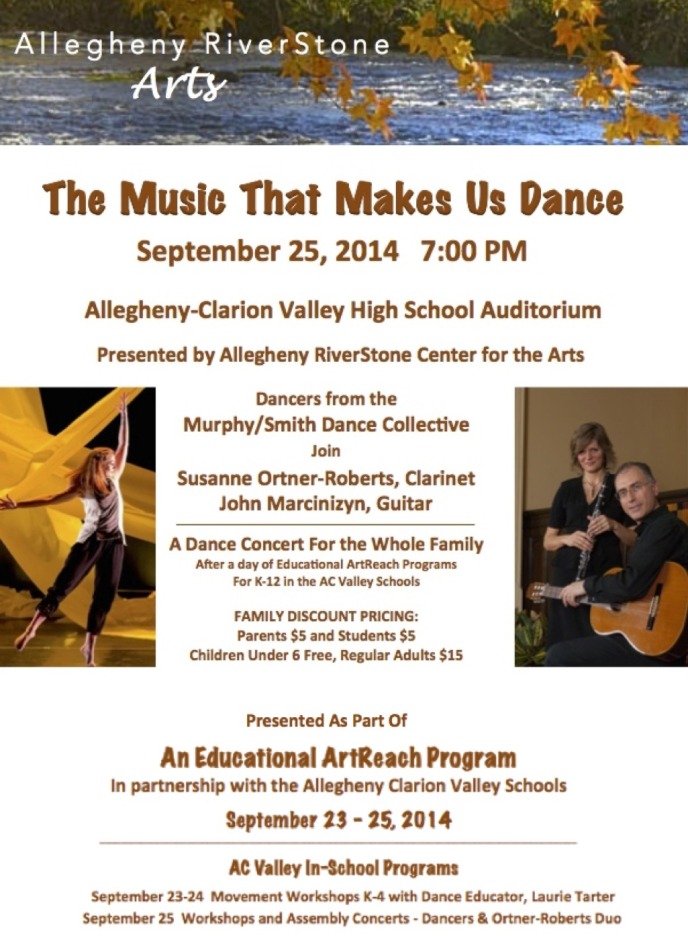 Susanne Ortner Duo & The Music That Makes Us Dance

Parent attending with a student, $5 per person