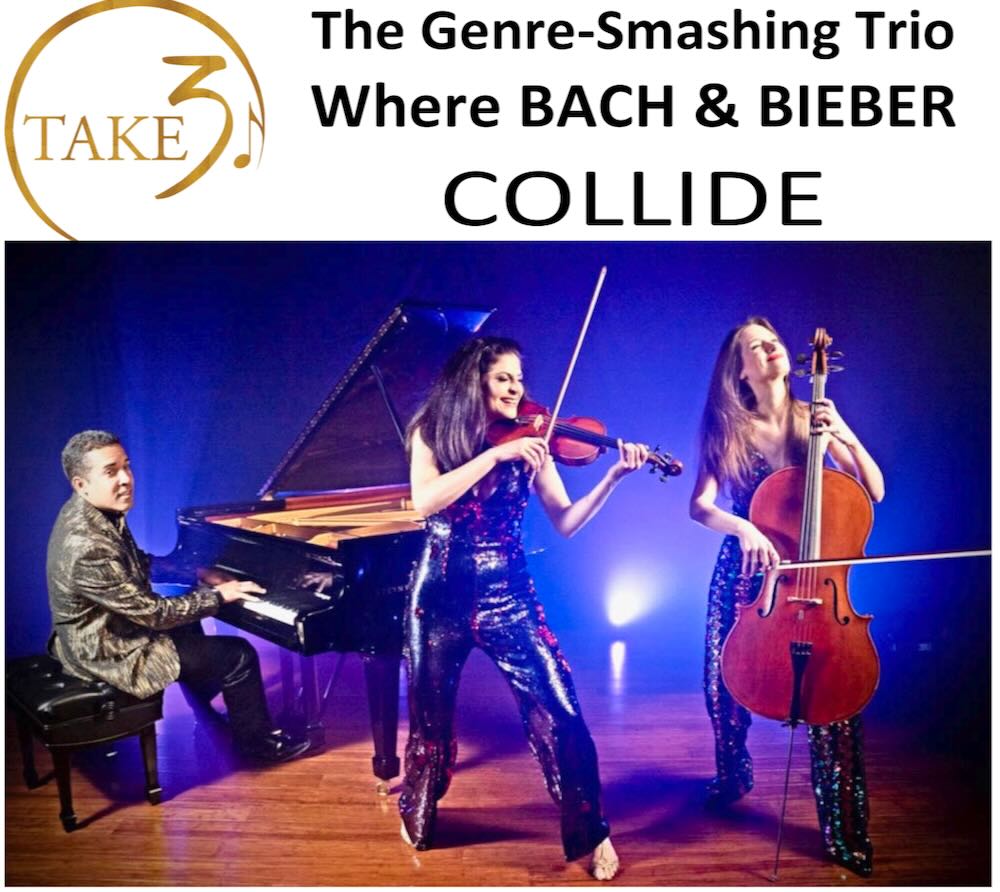 TAKE3 has a “flair for the wild and unexpected” and “brings the refinement of a
rigorous classical music background and infuses it with rock-star charisma.”

The genre-smashing, virtuosic-crossover trio with a flair for the wild and unexpected that describes their music as “where Bach and Bieber collide” – TAKE3 will bring to Lincoln Hall on Saturday night, October 8, at 7:30 PM on the eve of The Foxburg Fall Festival the refinement of a rigorous classical music background infused with rock-star charisma. 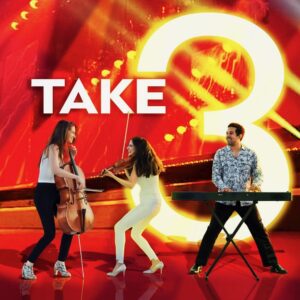 From “Unchained Melody”, “Amazing Grace”, “What a Wonderful World”, Leonard Cohen’s “Hallelujah” and Willie’s Nelson’s “On the Road Again” to Game of Thrones, Pirates of the Caribbean, Beethoven, West Side Story and Orange Blossom Special,  IT’S GOING TO BE AN UNFORGETTABLE EVENING OF ENTERTAINMENT!

TAKE3 makes it their mission to impart their love, passion and joy in music making to all who hear them, using their artistic ability as a conduit for musical storytelling.

The busy and widely-traveled group on the touring circuit, TAKE3 is visiting Performing Arts Centers and performing with orchestras in most of the 50 states this season. TAKE3’s interactive lighting shows, comedic stories of their journey from scales in conservatory practice rooms to pop music in packed stadiums, come together in unforgettable experiences that have fired up concert goers all over the nation.

Known for their infectious and down-to-earth personalities on stage, the trio performs with virtuosic instrumental cross-genre “chops”. ARCA is proud to be welcoming them to Foxburg to perform for both its enthusiastic classical and popular music audiences. 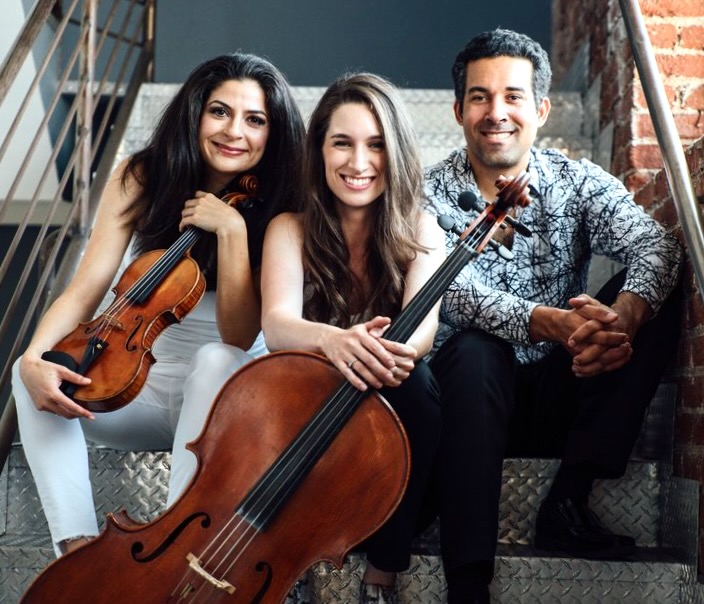 TAKE3 conveys an empowering message of joy and connection through music in high-energy performance of works ranging from the Beatles’ Yesterday and Leonard Cohen’s Hallelujah to Game of Thrones, Pirates of the Caribbean, Amazing Grace and Stand by Me.

No strangers to the stage as individuals, they have made an impact on the music scene as soloists, touring the world with Yanni, recording tracks for film and television and as soloists in front of Symphony Orchestras across the country.  The original music of TAKE3 can be heard throughout Netflix’s popular series “The Witcher” and on the Sony Witcher soundtrack. 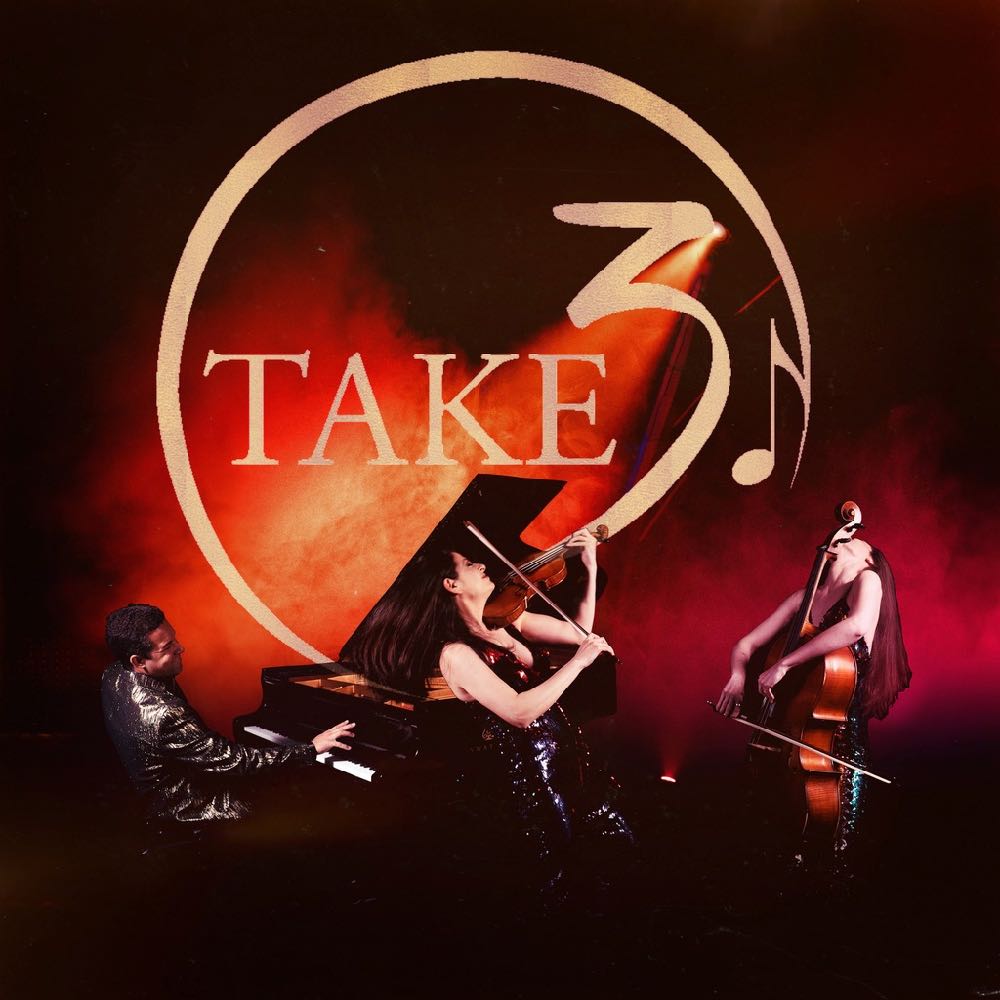 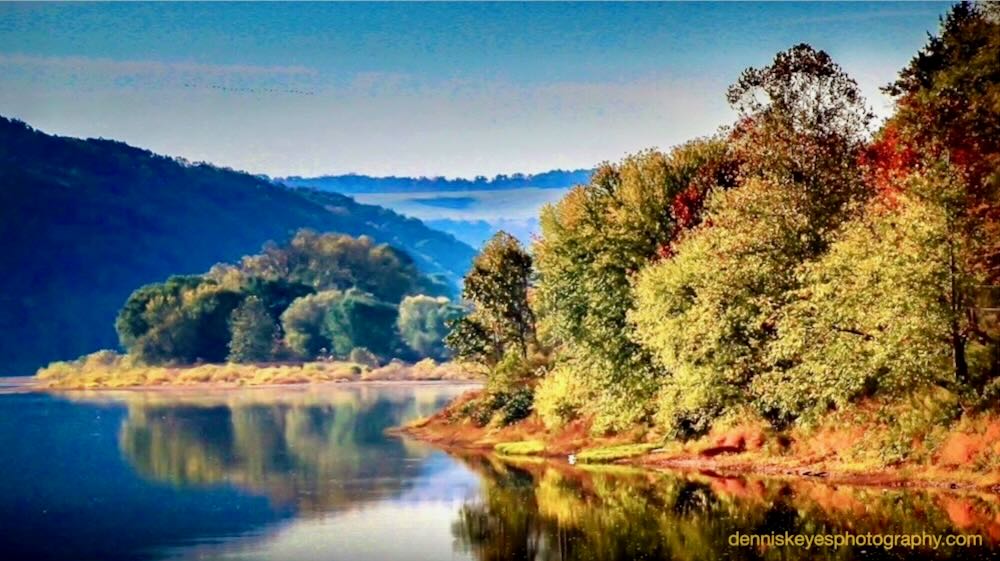 Arrive early before the October 8 concert to visit the Red Brick Gallery and Gift Shop open from 11 AM to 7 PM at 17 Main Street – and view the stained glass exhibit of RBG Cooperative Artist Jeffrey Calta – “Dark Art:  Leaded Glass in 2, 3 & 4 Dimensions” – illuminating ten of his stained glass creations. 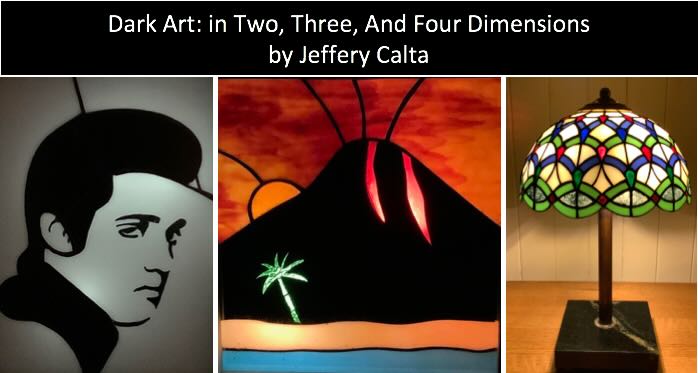 Jeffrey Calta, a resident of Fairview Township just outside Chicora, PA,  retired in 2019 after a career of 42 years as a chemist/production supervisor with the Sonneborn facility in Petrolia, PA.  Jeffrey has been fascinated with leaded (stained) glass most of his life.

Jeffrey has created a collection of leaded glass pieces that use non-solar illumination as the light source. Most people associate leaded or stained glass with church windows and sun catchers. The effect of sunlight through colored glass is a treat to the mind and eye. However, non-solar methods of illumination can offer the glass artist a new range of designs and theme-enhancing effects. The exhibit room will be darkened and illuminated only by the light emitted by each piece establishing a tranquil and unique atmosphere for exhibit viewing.

The exhibit in the Upstairs Gallery also will feature the nature watercolors of Red Brick Gallery founder and Artistic Director, Donna Edmonds.  Included will be a preview of the illustrations which appear in a new children’s book authored by Andy Johnson. The book will be available soon in the Gallery Gift Shop. Donna’s watercolors have been a staple in the gallery since its inception 13 years ago. As always, they include watercolor images of plants, creatures and insects native to Western Pennsylvania. 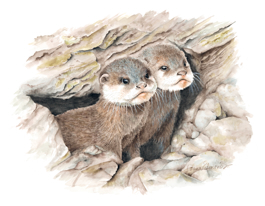 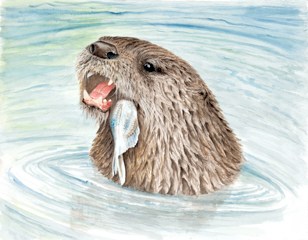 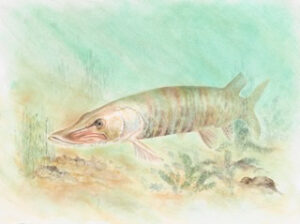 Donna Edmonds stated,” I am delighted to partner with Jeffrey’s unique exhibit. Light and shadow have a powerful influence in all artistic works. With stained glass, illumination is particularly essential to display the colors to their full beauty and brilliance. With watercolors, the transparent quality of the paints produces a lovely color clarity that dances with light.” 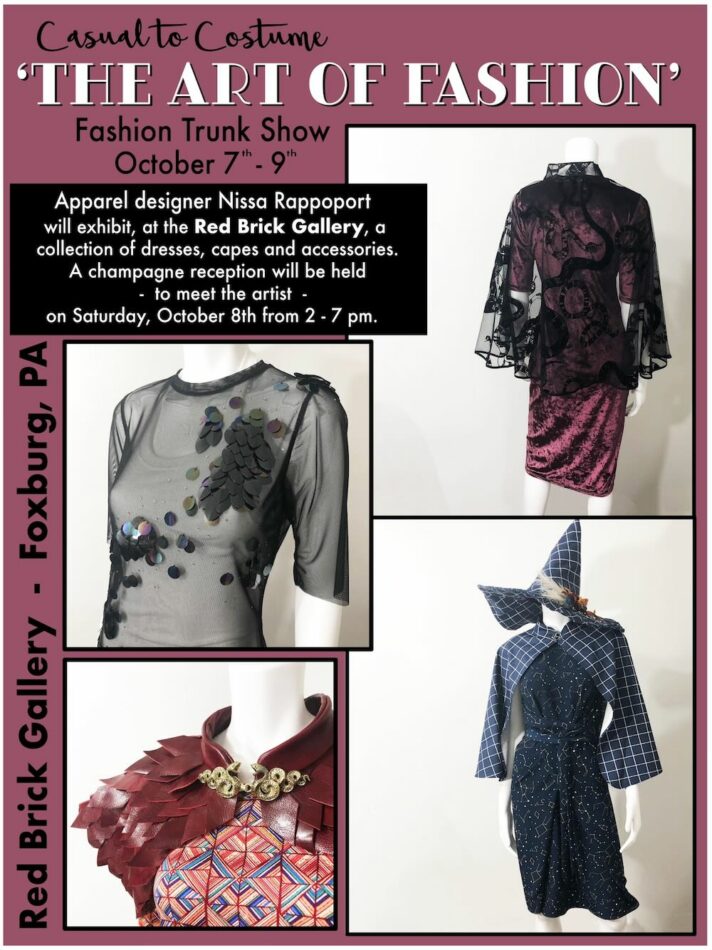 Before the concert on Saturday, October 8  – also at the Red Brick Gallery – from 2 to 7:00  PM, enjoy a mimosa reception while shopping in a Trunk Show featuring the artful women’s clothing and accessories of RBG Cooperative Artist Nissa Rappaport in the Upstairs Gallery.

Nissa Rapport is the creative genius behind The Gilded Troll, a women’s clothing and accessories company that matches elegance and whimsy in equal measure. She has been working in the fashion industry since 2005, cutting her teeth at Disney designing costuming. She has dual degrees in fashion design from Fashion Institute of Technology in New York City and Ursuline college in Cleveland, specializing in evening wear. She will presenting some of the creative effulgence that has come out of her private studio, with dresses and accessories that showcase her passion for fashion as art. Much of her work focuses on taking vintage styles and adapting them with modern and artistic twists.

Plan to arrive early enough to enjoy a walk along the Allegheny River trail or have a pontoon river trip with Foxburg Tours in the morning or afternoon!  Have supper at the Allegheny Grille with seating overlooking the Allegheny River, or for more casual fare, at Foxburg Pizza with salads, sandwiches and pizza.  Save time to enjoy wine tasting at Foxburg Wine Cellars and savor a gourmet coffee and hand made chocolate at Divani Chocolatier and Barrista.  Or spend the night in Foxburg in the lovely Foxburg Inn or up the river at Emlenton’s bed and breakfast,  The Barnard House. 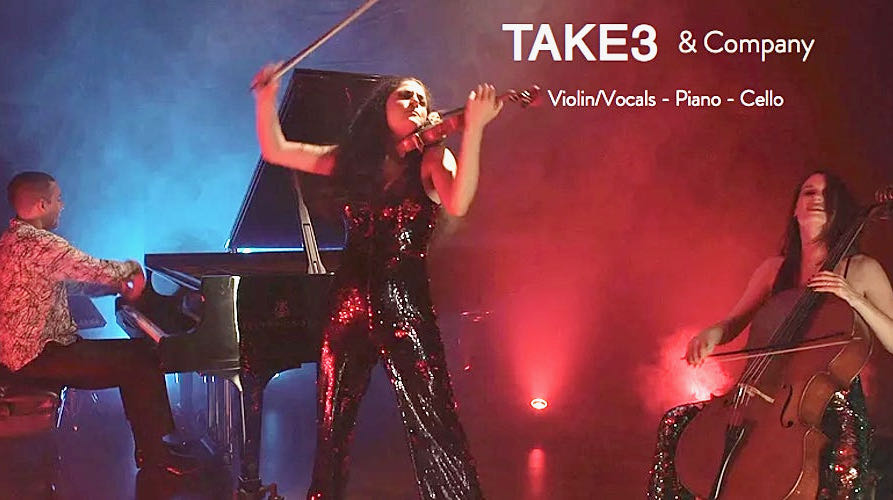 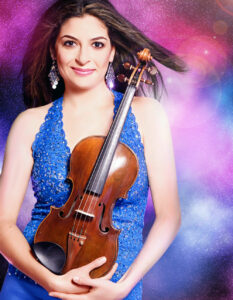 With her limitless enthusiasm and vast gifts as a performer and entertainer, American violinist, LINDSAY DEUTSCH, is a charismatic and captivating presence on today’s music scene. She has thrilled audiences world-wide with her passion for music and brilliant display of technique and musicianship.

Lindsay Deutsch is presently touring as a solo violinist with Yanni having just finished up tours with him throughout North America, Saudi Arabia, Uzbekistan, and Abu Dhabi. Future tours will include Indonesia, China and more.

Maestro Jung-Ho Pak, conductor and artistic director of the Cape Symphony Orchestra, says of Lindsay, “A conductor dreams about finding a soloist who understands the essential responsibility of helping change a large community’s view of classical music. In a time when every concert has to be unforgettable and a game changer, Lindsay can make that happen every time.” 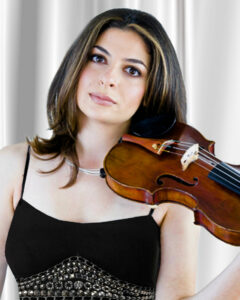 Ms. Deutsch received her education from the Colburn Conservatory in Los Angeles, where she studied under Robert Lipsett. Lindsay Deutsch plays on an 1845 Jean-Baptiste Vuillaume violin. 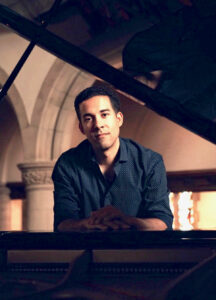 Artistic Statement:  “Whether I’m performing Bach, Chopin, Gershwin, or any great composer, my mission as a pianist is to instill inspiration and imagination in all of my audiences. When I perform, I feel like the piano and I are one entity, making my connection with the public even more deeply profound. Performing to me is such an exciting and spiritual experience, and I’m humbly grateful to use the medium of the piano to communicate the language of music to everyone.”

Southern Californian pianist, JASON STOLL, has garnered many praises and awards for his performances throughout his career thus far.

Over the years, Mr. Stoll has been both participant and performer at several notable summer music festivals including the Aspen Music Festival, and Pianofest in the Hamptons. While in residence at these festivals, Mr. Stoll has had the privilege of working closely with faculty from many prestigious conservatories and universities. 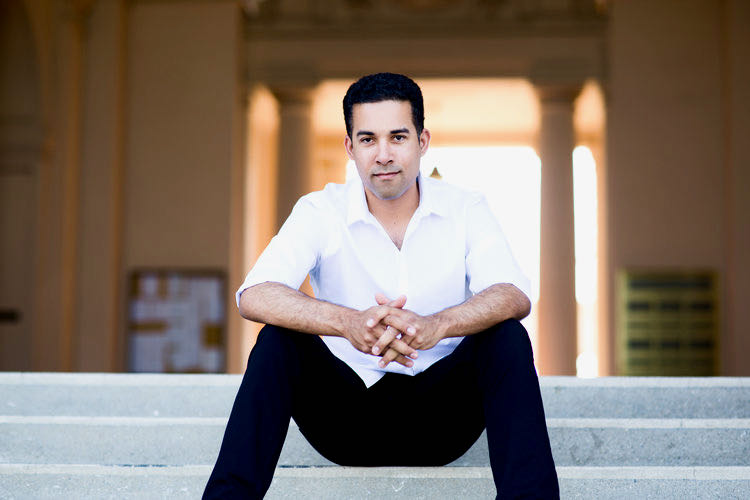 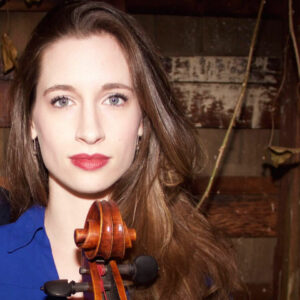 Hailed by San Francisco’s Civic Center for her “…professional and highest caliber of playing,” Los Angeles-based cellist Mikala Schmitz is an avid performer of many different styles of cello playing. Ms. Schmitz often finds herself crossing over into a variety of musical genres. From jazz and electronic to classical and baroque, Mikala continues to find new and fascinating collaborative avenues.
Mikala’s work with the English rock group The Last Shadow Puppets took her all over Europe, and you can hear her on their EP Dream Synopsis. 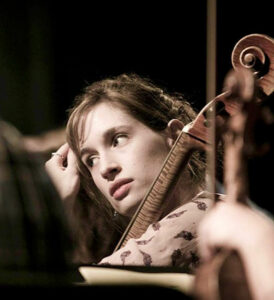 You can also hear Mikala on television shows such as Netflix’s Chef’s Table and HBO’s The Brink . Ms. Schmitz will resume her award-winning tenure with Tim Robbins’s acting troupe, The Actors’ Gang, on a national tour of their production of The New Colossus , an original one-act play written and directed by Tim Robbins and members of the cast, with original music by Ms. Schmitz and David Robbins. 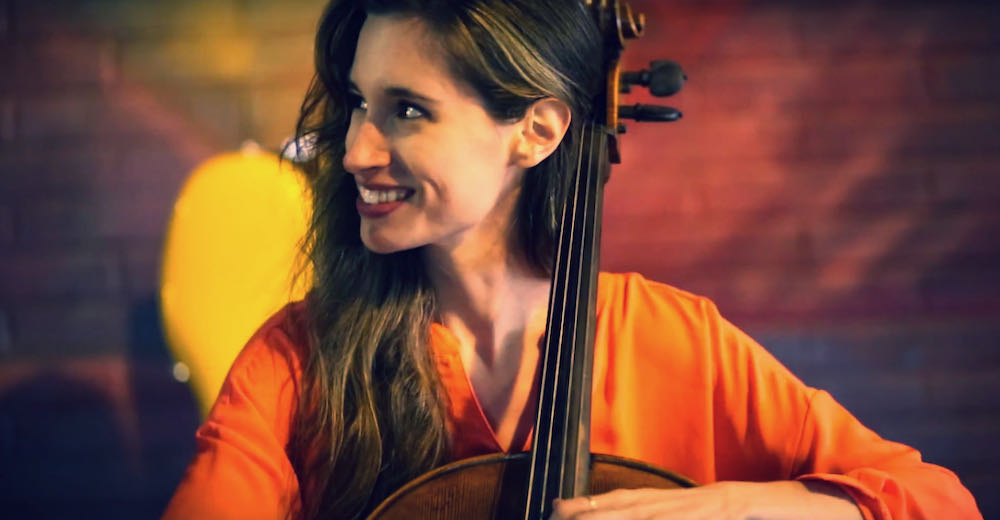 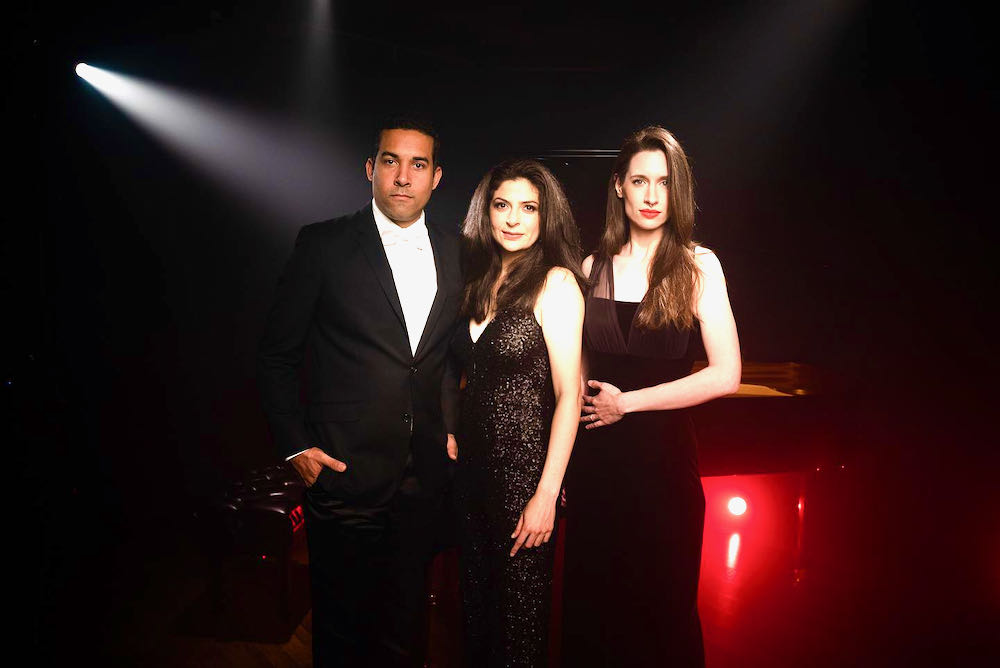