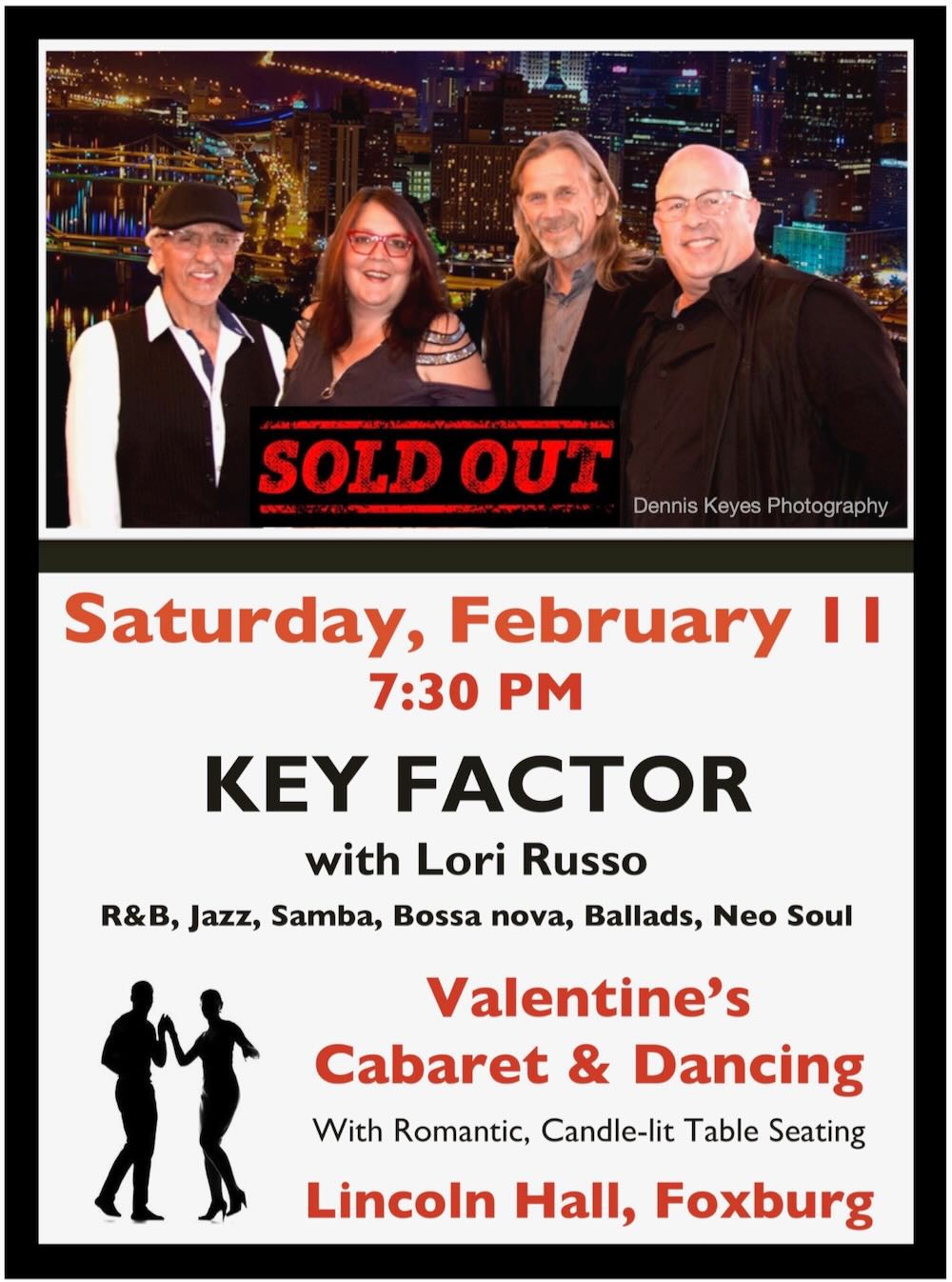 We regret that the Key Factor cabaret is SOLD OUT.
Please reserve and buy online early for Lincoln Hall concerts in 2023.

Love and Romance will be in the air as Allegheny RiverStone Center for the Arts opens its 2023 season with a Valentine’s Cabaret with music and dancing on Saturday, February 11 at 7:30 PM in Foxburg’s Lincoln Hall. 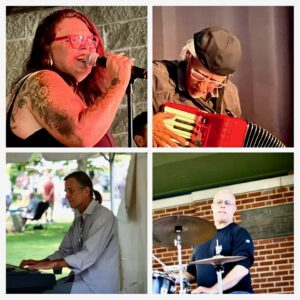 KEY FACTOR with LORI RUSSO, vocalist and bassist, and ARCA favorite Mark DeWalt at the keyboard, plus John DeCola on electric accordion and keyboards and Glenn Schaft on drums will get you up and dancing at the back of the hall with a mix of R&B classics, jazz standards, samba, bossa nova, romantic ballads, Caribbean styles, and Neo soul.

Feel the dynamic energy behind their music with Lori Russo and John DeCola (in another band) having just returned from advancing to the Semi-Finals in the International Blues Challenge in Memphis, TN at the end of January!

Glittering candlelight and cabaret table seating – with complimentary cheese, savories, salty snacks and Valentine’s chocolates – and Beer and Wine for Sale –  make it the perfect night out with your sweetheart to celebrate the Valentine’s Day holiday… singles welcomed too!

Tickets are Adults $25.  Because of cabaret table seating, reservations are required.  Seating is limited so be sure to reserve early. This concert will sell out!

About KEY FACTOR with Lori Russo

Key Factor, a quartet of veteran performers, presents a dynamic mix of jazz, blues, neo-soul and funk. Key Factor is fronted by Lori Russo on vocals and five-string electric bass, Glenn Schaft on drums, and the band’s namesakes Mark DeWalt and John DeCola on keyboards and electric accordion.

Vocalist Lori Russo has appeared and toured with Ray Charles, the Nelson Riddle Orchestra, Dorsey Brother’s Big Band, Jim Neighbors, Kenny Rogers and John Faddis, among others.  An educator in the Pittsburgh Public Schools, Lori is featured on numerous recordings of blues, rock and jazz as well as being the lead singer for the Uppercuts. Lori’s recording with the Uppercuts recently won the 2022 Blues Society of Western PA 17th Annual BluesChallenge.  In January, 2023, Lori and the Uppercuts advanced to the semi-finals in the International Blues Challenge in Memphis, Tennessee in January and will be bringing that energy and excitement back to our Lincoln Hall audience! 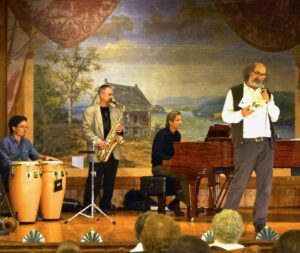 Key Factor keyboardist Mark DeWalt is much beloved by ARCA audiences from his past performances with his jazz group CATRO – and appearances in Poetry and Jazz events in Lincoln Hall.  Mark appears regularly throughout the region playing piano and keyboard, performing in festivals, clubs, commercial and private settings. Mark is a fine art woodworker and Red Brick Gallery Cooperative Artist whose works have been featured in guest exhibits in the Second Floor Gallery and are for sale in the Red Brick Gallery Gift Shop.

Seen regularly in the region performing with blues and R&B bands including the Uppercuts, the Aces and Bubs McKeg, John DeCola has had a rich background as keyboardist and electric accordionist in blues, Rock n Roll, country, R&B and Top 40 Rock.

In the Spring of 2021 when there were very few opportunities to perform live music after COVID, keyboardists Mark DeWalt and John DeCola got together to compare musical styles. John’s playing had been primarily with blues, R&B and rock, with Mark’s background being more centered in jazz traditions. Academic discussions of theory quickly became jam sessions and the idea of creating a band with 2 keyboards (plus accordion) developed.

When an opportunity to play at an outdoor venue came along, they invited Pittsburgh vocalist and 2022 Pittsburgh Blues Challenge Winner, Lori Russo to join them for the show. Lori had previously sung jazz with Mark and recorded with John in blues styles. Halfway through the first rehearsal she offered to play bass as well as sing. Now all they needed was a great drummer to have a full band! Music educator and world-class performer Glenn Schaft was the first choice for Mark, and John and Lori quickly agreed when they heard him play.

The combined talents and energy of these 4 seasoned players led to a couple of fantastic musical outings loved by the audience, so the band decided to stay together and create the unique repertoire that is Key Factor.

More About The Artists

Of her seven CDs of blues, rock and jazz, her performance of the title track of her 1997 CD (and her composition) “It’s You, It’s Me” was hailed by All About Jazz  for “… just a touch of vibrato, well-trained vocal chops, a natural talent for working the lyric”. Lori’s recording with the Uppercuts recently won the 2022 Blues Society of Western PA 17th Annual BluesChallenge.  In January, 2023, Lori and the Uppercuts will be competing in the International Blues Challenge in Memphis, Tennessee.

With a Bachelors in Education from Duquesne University and Masters’ Equivalency from the University of Pittsburgh, she is an instrumental music teacher in the Pittsburgh Public School System – as well as a Pittsburgh Jazz Society Scholar.

Key Factor keyboardist, Mark DeWalt, also is the leader of the jazz band CATRO – a long-time ARCA audience favorite. Living in the Grove City area, Mark appears regularly throughout the region in festivals, clubs, commercial and private settings, playing piano and keyboard and appearing with artists such as Tammi Dahl, Jane Gregg and David Kana.

Mark’s playing has also been featured on recordings with groups whose styles include World Beat (Bollo Mah Kissy), original rock (Frank Feroz Band), Jazz, and Contemporary Christian. Career highlights include performing at the Kennedy Center in Washington DC, two tours to Scandinavia, a tour to South Africa and many regional Jazz and Art Festival engagements. Mark gives private lessons and is the staff musician at North Sewickley Presbyterian Church.

Mark DeWalt also is a fourth-generation woodworker located in rural western PA about one hour north of Pittsburgh. Fine craftsmanship and a creative process informed by the materials being used result in furniture that feels both fresh and traditional.  He grew up handling and manipulating wood; learned to see the beauty revealed through works of fine craftsmanship, and learned to love the textures, colors, character and potential.  Local forests, salvaged artifacts and reclaimed lumber provide the raw materials for the work. In addition to custom pieces, restoration work is also done; continuing the pattern established by his father, grandfather and brother. 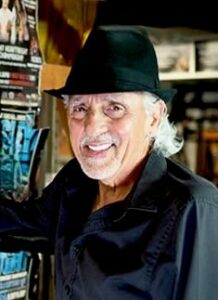 John DeCola has had a life-long, rich background as keyboardist and electric accordionist in blues, Rock n Roll, country, R&B and Top 40 Rock. 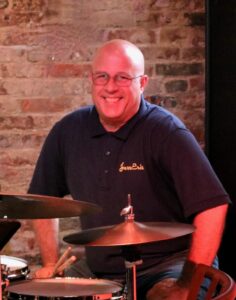 Glenn is Professor of Music and Director of Drumset and Percussion Studies at Youngstown State University’s Dana School of Music in Youngstown, Ohio where he teaches applied percussion lessons, percussion methods, and directs the Percussion Ensemble. He is Artist in-Residence with YSU’s Dana Ensemble, a faculty chamber music collective who perform eclectic contemporary musics and the co-founder and faculty advisor of the Youngstown Percussion Collective, a YSU student organization.

Glenn is an artist/educational endorser with the Zildjian cymbal company, Vic Firth sticks & mallets, and Remo drumheads & world percussion, an educational consultant with Black Swamp Percussion, and a member of the Percussive Arts Society where he serves on the Drumset Committee.

Glenn earned the Doctor of Musical Arts from the University of Illinois at Champaign-Urbana, the Master of Arts from Eastern Illinois University, and the Bachelor of Music from the Baldwin-Wallace College Conservatory in Berea, Ohio. He pursued post-doctoral studies and served as a graduate assistant/manager of the New Music Associates at Cleveland State University.