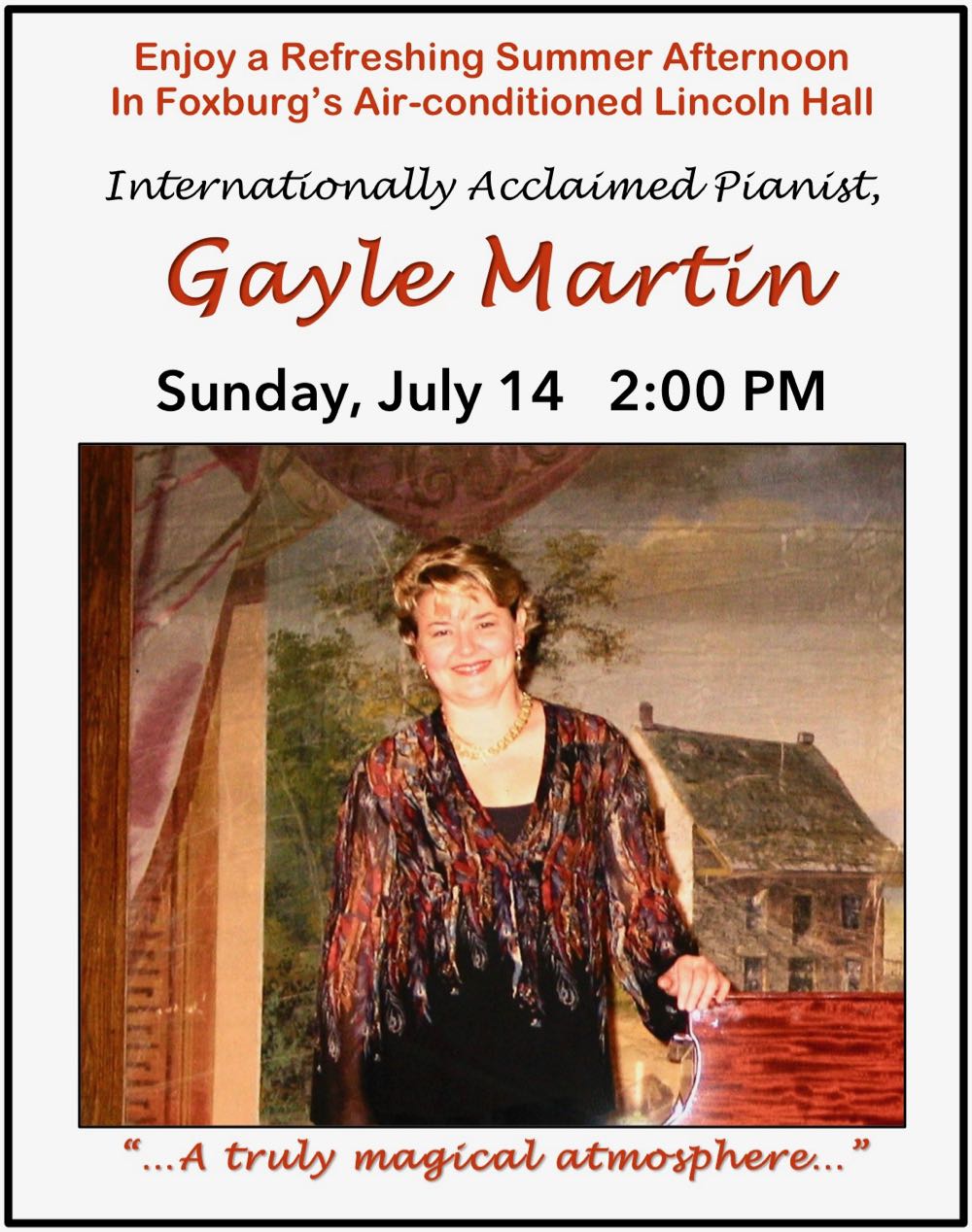 Henry Wadsworth Longfellow provided posterity with many gems and among them is this poignant statement: “Ah, how good it feels!  The hand of an old friend.” Have a refreshing break from the summer heat in the air conditioned comfort of Lincoln Hall and be uplifted by the artistic hands of ARCA favorite and friend, Internationally acclaimed pianist, GAYLE MARTIN, on Sunday July 14, 2019 at 2:00 PM in Lincoln Hall. A Meet the Artist wine and cheese reception and Opening of the Clarion River Art Exhibit with poetry reading follows the concert in the Red Brick Gallery from 4:00 – 6:00 PM.

From Moscow to Buenos Aires and New York to Los Angeles – in concertos and recital – internationally acclaimed pianist Gayle Martin’s “deep seated emotional response to the music” (Washington Post) creates “A truly magical atmosphere”.  Allegheny RiverStone Center for the Arts by popular demand welcomes Gayle Martin back to the Lincoln Hall Steinway to perform a program of solo piano masterworks by Grieg, Beethoven and Chopin as well as Schubert’s popular Fantasie in F minor for four hands, joined by pianist TED BARR, with whom Gayle has recently performed in Philadelphia, New York, New Jersey and Connecticut. 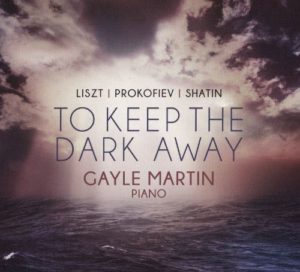 The sole American laureate of the Sixth International Tchaikovsky Piano Competition in Moscow — the third American woman ever to reach the finals, Gayle has recently released her CD “To Keep the Dark Away,” (Ravello Records, 2016) which was hailed unanimously by three reviewers at Fanfare Magazine:  “Superb performances, staggering interpretations; thought-provoking and deep; beautifully characterized… An infinitely rewarding disc that demands repeated listening.”  A rave review by Daniel Kepl, written in August 2018 for Performing Arts Review, proclaims it “… a unique CD.  Shatin the colorist, has a collaborative partner in Martin, whose clarity of technique, articulations and nuanced narrative helps transform words to sound.  Spectacular!”

In addition to solo recitals also featuring the Schubert Fantasie with pianist Ted Barr, Gayle recently has performed the Grieg Piano Concerto in Texas and at Disney Hall in Los Angeles, the home of the Los Angeles Philharmonic.  Gayle Martin’s CD “To Keep the Dark Away”, released in 2016, features a signature work for her, Franz Liszt’s transcription of Robert Schumann’s song “Widmung” (Dedication), which Gayle will be playing in Lincoln Hall on Sunday, July 14.

Immediately following the concert, meet the artists at a wine and cheese reception and opening of the Clarion River Art Exhibit with poetry readings on the second floor of the Red Brick Gallery at 17 Main Street in Foxburg from 4:00 – 6:00 PM on Sunday, July 14.  Artists include Kyle Yates, Tom DiStefano and Carol Schiffhouer, among others, and poets include Byron Hoot, J.V. Miller, Judy Rock, Patricia Thrushart, Girard Tournesol and Philip Terman. 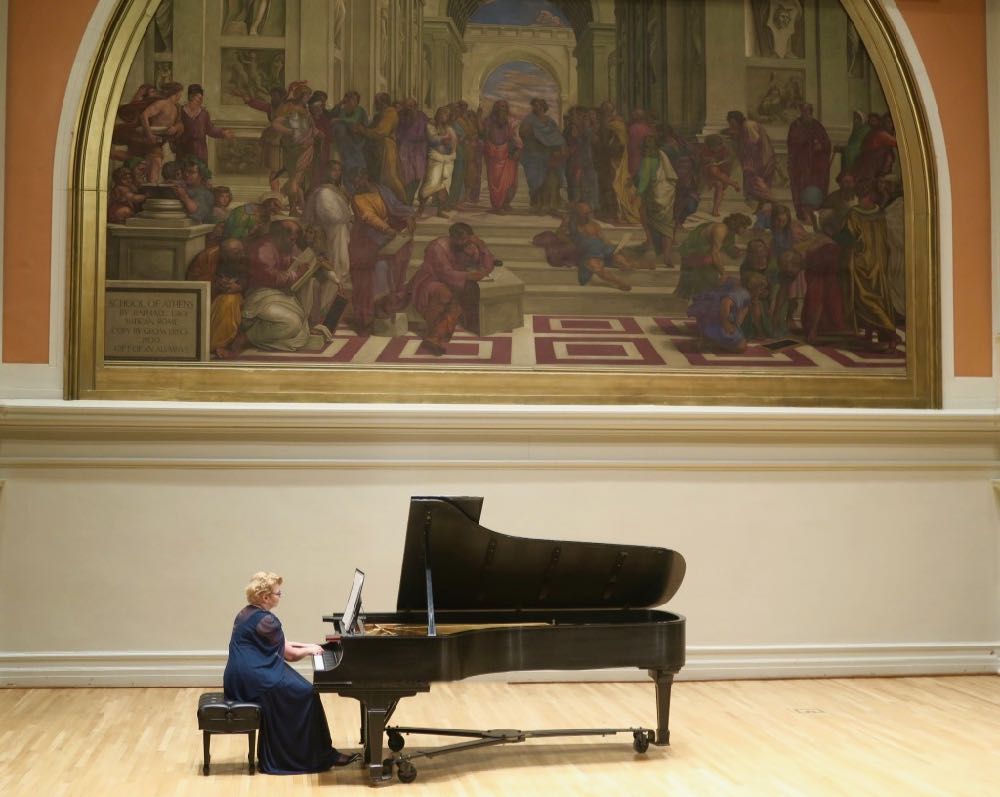 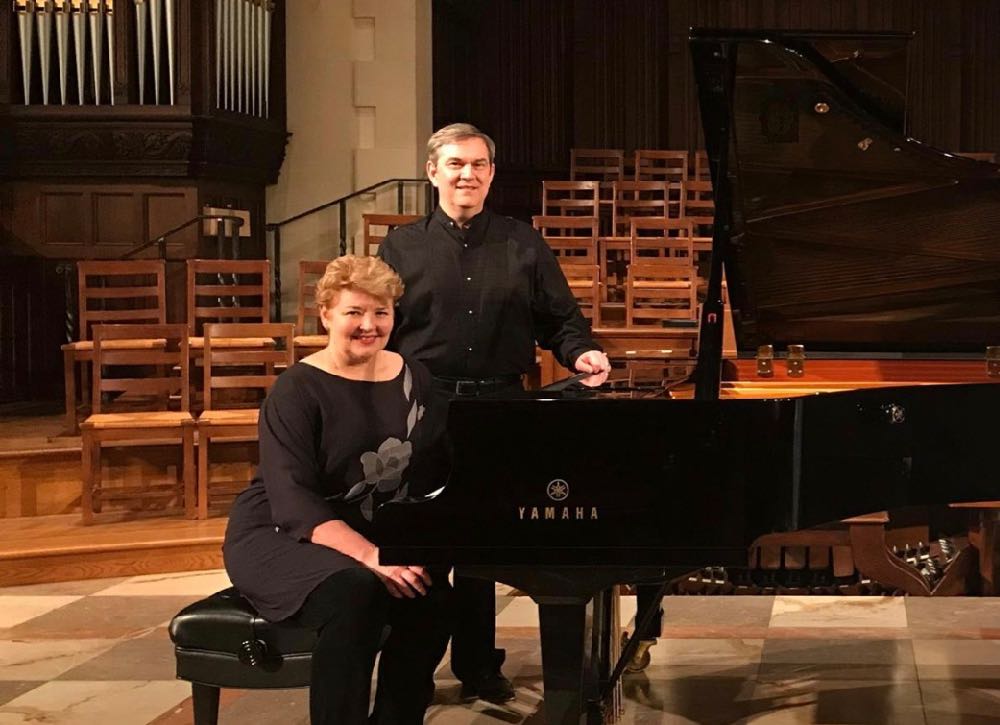 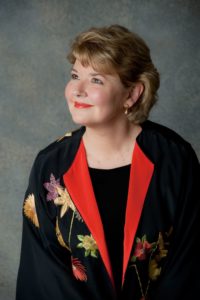 Gayle Martin enjoys a distinguished career as a concert pianist, having achieved international prominence as the sole American laureate of the Sixth International Tchaikovsky Piano Competition in Moscow — the third American woman ever to reach the finals.

Reviewers have written of “her intense passion and deep-seated emotional response to the music” (Washington Post), and that “this was a performance which, if recorded on 78s, could have fooled the average pianophile into thinking he or she was listening to one of the greats of the past.” (Woodstock Times). In reviewing her solo recital at Lincoln Center’s Alice Tully Hall, The New York Concert Review wrote that she created “a truly magical atmosphere…and made this listener smile with pleasure.”

Her recent CD, “To Keep the Dark Away,” (Ravello Records, 2016) was hailed unanimously by three reviewers at Fanfare Magazine:  “Superb performances, staggering interpretations; thought-provoking and deep; beautifully characterized…An infinitely rewarding disc that demands repeated listening.”  A rave review by Daniel Kepl, written in August 2018 for Performing Arts Review, proclaims it “… a unique CD.  Shatin the colorist, has a collaborative partner in Martin, whose clarity of technique, articulations and nuanced narrative helps transform words to sound.  Spectacular!” 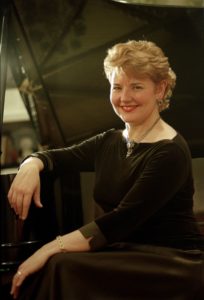 Highlights of Martin’s career include performances with the California Philharmonic at the Walt Disney Concert Hall in Los Angeles; the Houston Symphony (since age 12); the Moscow Radio Philharmonic; the Moravian Philharmonic; the Maracaibo Symphony; the Minnesota Orchestra; the Denver Symphony; the Virginia Symphony. She has toured throughout South America, including an engagement at the Teatro Colón in Buenos Aires with the Orquesta Sinfónica Nacional de Argentina.  Other engagements include appearances at the White House and the Phillips Collection in Washington, D.C., and numerous performances throughout the United States, Puerto Rico, Mexico, Austria, Poland, Israel, the Czech Republic, and Mainland China.

Following a recent performance of the Tchaikovsky Piano Concerto, the critic Courtenay Cauble wrote: “Gayle Martin has it all. The depth of feeling is always there…because she makes the music her own and then communicates it, as any real artist must… Her performance was both brilliant and moving, and always beautiful.” 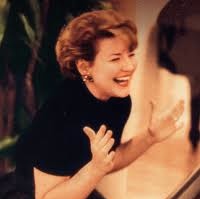 A native Texan, Gayle Martin was one of the last students of the famous pedagogue Mme. Rosina Lhevinne at the Juilliard School. She was awarded the Josef Lhevinne Prize at graduation.  She holds the M.A. degree from New York University (where she studied with Eugene List) and taught there for five years.  Other notable teachers have included Seymour Bernstein, Arminda Canteros and German Diez.

Gayle Martin has been a frequent competition judge, both locally and internationally.  She has performed on period pianofortes (Clementi 1805 and Katholnig 1807), and is a Steinway Artist.   Gayle Martin teaches privately in Houston, New York, New Jersey and Connecticut, and is currently the Co-Program Chair of the Houston Tuesday Musical Club. 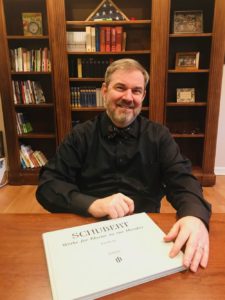 Ted W. Barr joins Gayle Martin in piano duo performances in New York, New Jersey, Connecticut, and Pennsylvania. He has distinguished himself as a collaborative pianist, a motivating vocal coach, and inspiring teacher on the voice faculties of Westminster Choir College, Rutgers University, and Wagner College in New York City.

Mr. Barr’s voice students have appeared on Broadway in the original cast of The Book of Mormon; in the revivals of Follies, Nine, and Big River; and in both the Moscow and Broadway productions of 42nd Street. They have performed with the Metropolitan Opera, Opera Philadelphia, Cleveland Opera, Cleveland Orchestra, Staten Island Symphony, and in the world’s largest churches and cathedrals. On television, his students have appeared on Law and Order (SVU),Sex and the City, and Hawaii Five-0; and on film in Jurassic Park: Fallen Kingdom. 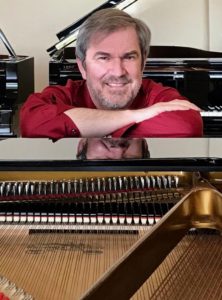 His compositions and arrangements have been performed at West Point’s Cadet Chapel and in churches in New York, New Jersey, and Pennsylvania. Several of his arrangements of Shaker spirituals are recorded on Awake My Souland Bow and Be Simple(Julep) by the South Union Quartet.

Gayle Martin performed “Fantasy on St. Cecilia” in the April 6, 2019 concert of music by composer Judith Shatin in Old Cabell Hall at the University of Virginia – part of Shatin Music Month, a celebration of the composer’s retirement from teaching and shift to full-time composing with performances of her solo, choral, chamber, electroacoustic, digital and orchestral music.  Martin’s consummate and artistically tremendous, tour-de-force performance received a prolonged standing ovation and rave review by Ralph Graves:

For me, the highlight of the concert was “Fantasy on St. Cecilia” (1997). Based on her piano concerto “The Passion of St. Cecilia,” the fantasy distills the essence of that music into a version for solo piano.

Gayle Martin, who commissioned the work, performed. And what a performance! It was 16 minutes of raw emotion barely contained by 88 keys. We heard tone clusters formed by arms slamming on keys, frantic bursts of intricate, atonal runs, and stop-on-a-dime mood and tempo changes.

Martin owned this work. I could see her singing along with this complex music. It was thrilling. Those of us fully appreciated what we just experienced gave her a standing ovation.” 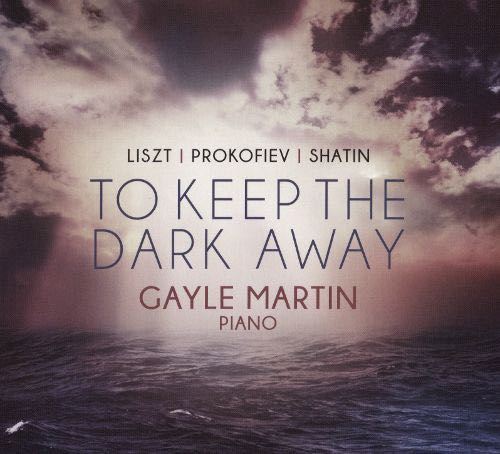 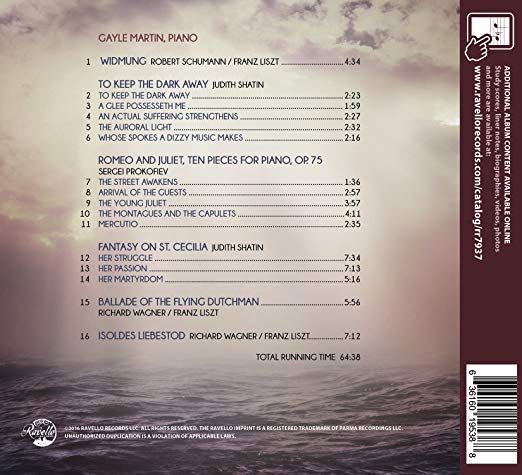 Also on the CD, a dazzlingly stylish and flawlessly descriptive performance by Martin of five movements from Prokofiev’s Romeo and Juliet, Ten Pieces for Piano, Op. 75 and two gorgeously executed Wagner/Liszt transcriptions, Ballade of the Flying Dutchman and the exquisite Isoldes Liebestod.