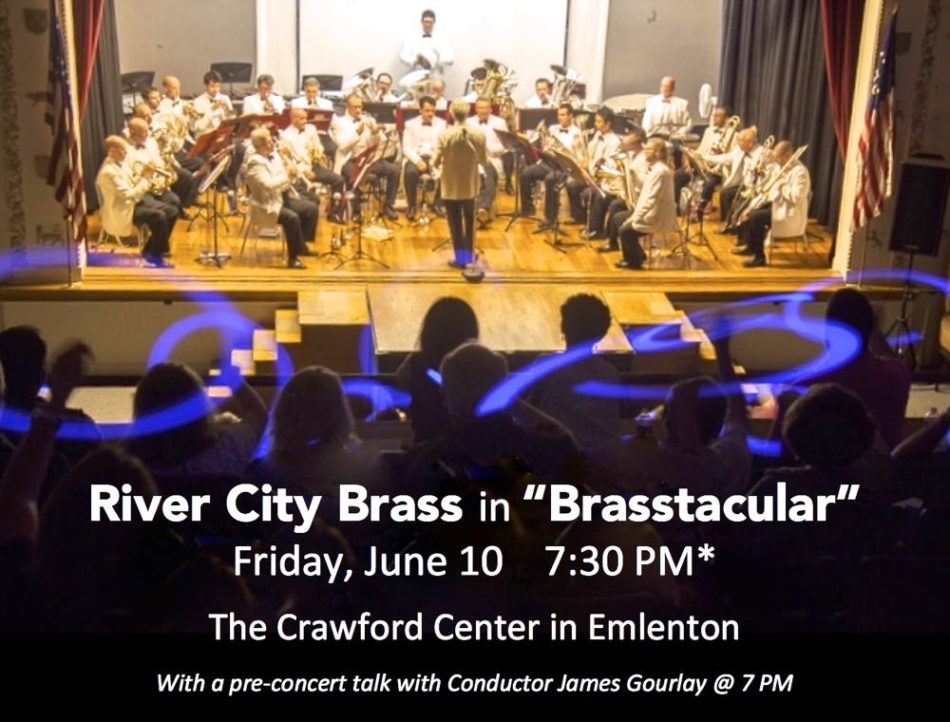 Brass Music in the summer is as American as “apple pie”.  From June to August, brass bands can be heard playing concerts in gazebos and parks in communities all across the United States. 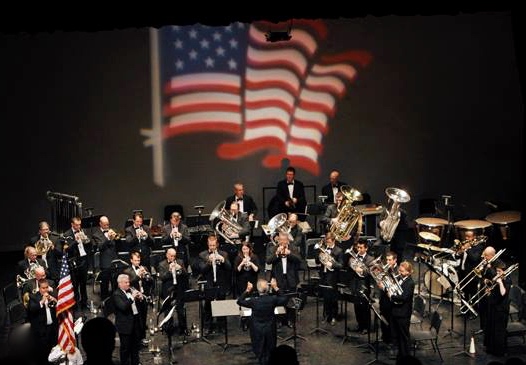 One of America’s oldest and most celebrated brass bands, the RIVER CITY BRASS, will be performing on Friday, June 10 at 7:30 PM not outdoors in the Allegheny River Valley’s beautifully scenic Emlenton – but, even better, in its historic and newly air conditioned Crawford Center.

It will be a BLAST!    Make it a night of musical fun for the whole family, enjoying a Pops concert by the internationally acclaimed and world travelled RIVER CITY BRASS. Bring your grandparents and grandkids – friends and neighbors – to musically celebrate the beginning of summer! Returning by popular demand, conductor James Gourlay will lead the 12 River City Brass virtuosos in a program entitled “Brasstacular” – sure to please the enthusiastic Emlenton audience once again… and, this year, in air conditioned comfort.

After the RCB performance in Emlenton in 2014 before more than 325 people, many in the audience on the way out said, “Please bring them back… and soon!”  As seen in the photo above, during the concert their charming and articulate conductor, James Gourlay – one of the world’s greatest brass band conductors – spoke to the audience from the podium, engaging them in whirling florescent light bands over their heads during one tune and having service men and woman stand during a stirring patriotic tribute to each of the branches of the United States military. 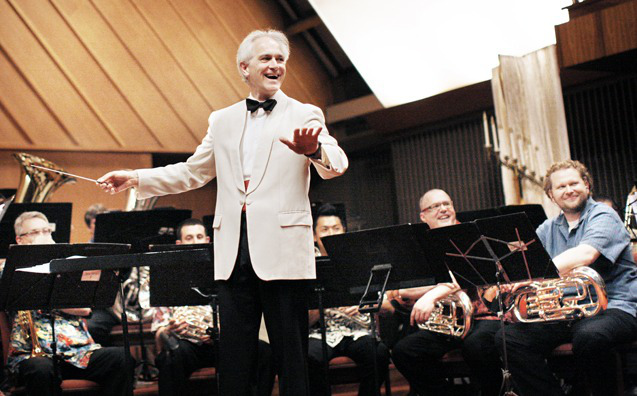 This year’s concert promises to be even more fun – with a special treat for brass music lovers.  While the concert begins at 7:30 PM, the band’s entertaining conductor, James Gourlay, will give an informal talk about brass instruments and the music they’ll be performing beginning a half an hour before the concert at 7:00 PM.

Each year, tens of thousands of people at home and on the road enjoy River City Brass music featuring American Tunes, Big Band Swing, Jazz, Broadway, Hollywood, Bollywood, Classical, Contemporary Masterworks, and Traditional Marches. River City Brass is known to be entertaining, enlightening, funny, thoroughly professional, and family friendly. The band tours in various ensemble sizes, from a brass trio to the full 28-member band.  In 2016, ARCA is pleased to be presenting the 12 musician ensemble to wow the the Crawford Center audience with its brilliantly virtuosic and stirring music making. 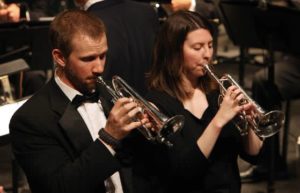 The River City Brass was the first professional concert band to be established in the United States in over 25 years. Founded in 1981 by the late Robert Bernat (Conductor and Music Director 1981-1994), the River City Brass performs a concert series in Western Pennsylvania in configurations of both the 28 piece and 12 piece brass band.  In addition, River City Brass has toured extensively throughout the Unites States with more than 60 performances each year as part of community concert series, major symphony pops series and arts festivals. One local resident became very excited about the Band coming to Emlenton because a friend heard the Band in Portland, Oregon and offered a glowing review of their performance on the West Coast.  For thirty years, the RCB has delighted audiences in the Pittsburgh region, nationally and internationally.  Their most recent international tour took them to Italy in May of 2013.

Mr. Gourlay, a native of Scotland, began his career at the age of 18 as the Principal Tubist of the Birmingham Symphony Orchestra, the BBC Symphony Orchestra and the Orchestra of the Zurich Opera.  James also conducted Great Britain’s Grimethorpe Colliery Band, leading one of the most internationally lauded and prominent brass ensembles in the world on a tour throughout the British Isles, Europe, Japan, Australia and New Zealand. 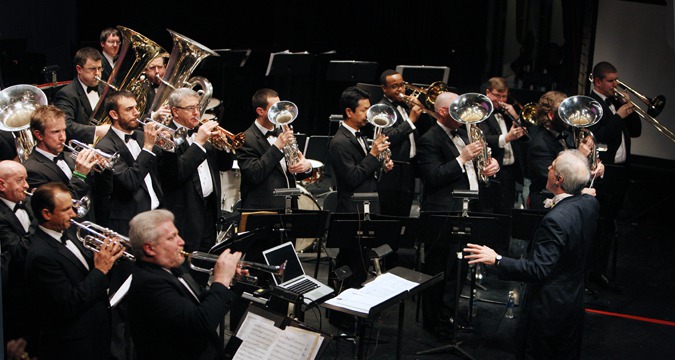 In its ongoing commitment to education, RCB proudly has maintained an acclaimed youth band and in 2012 inaugurated a ‘Saturday Music’ program for students in grades 5 to 12, partnering with the Pittsburgh Public Schools.  This program has been designed to explore and grow the musical interest and abilities of Pittsburgh’s public school students.

The River City Brass is acclaimed for its signature style of programming.  Every performance features superb soloists and some lighthearted fun!  Often called the “Boston Pops—In Brass,” the band’s extensive repertoire covers a wide range of styles and musical genres.  They are equally expressive and comfortable performing American tunes, Big Band jazz and swing, music from Broadway and Hollywood, classic and contemporary masterworks and—of course—traditional marches, a staple of America’s heritage.  The Band has fifteen recordings of this widely ranging repertoire to its credit, the latest of which are ‘River City Brass 30 Years’ and ‘Christmas Brasstacular.’  Recordings will available to purchase at the concert. 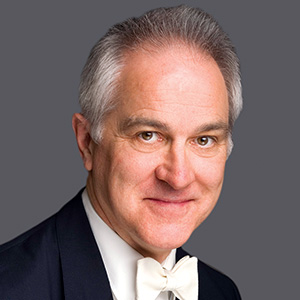 James Gourlay was born in Scotland, where, at the age of ten, he was “volunteered” to play in his school brass band. Being the tallest in class, he was serendipitously given the tuba, an instrument he loves and continues to promote all over the world.
After much success as a solo champion, Gourlay entered the Royal College of Music but left after a short time to become the Principal Tuba of the City of Birmingham Symphony Orchestra at the age of eighteen. He continued working at the BSO for ten years, then performed for an additional ten years with the Orchestra of the Zurich Opera. Gourlay’s career as a chamber musician and soloist continues to flourish. He has been a member of the Philip Jones and English Brass ensembles with which he has toured the world, and also continues to perform as a soloist extensively. He has recorded five solo CDs, the latest being British Tuba Concertos recorded for the Naxos label with the Royal Ballet Sinfonia, which has since received international critical acclaim.
Gourlay’s early work within the Brass Band Movement forms a vital component of his creative output. After early success with the Brass Band Berneroberland, he became music director of the Williams Fairey Band with which he won the English Masters and British Open contests. Gourlay has also been the professional conductor of the Grimethorpe Colliery and the Etoiles, with which he has won the Swiss National Championships, the Swiss Open Championships, and second place at the European as well as at the World Brass Band Championships. 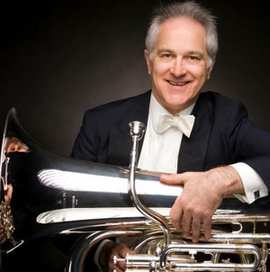 Gourlay’s commitment to music education is a continuing passion. He has been Head of Wind and Percussion at the Royal Northern College of Music and Deputy Principal and Music Director at the Royal Scottish Academy of Music and Drama. He holds a Doctor of Musical Arts degree from Salford University, a Masters degree from Leeds University, a Fellowship of the Royal Northern College of Music, a Fellowship of the London College of Music, and is also a recipient of the Henry Iles Medal, presented by the Worshipful Company of Musicians for services to the Brass Band Movement. Currently, Gourlay is International Vice President of the International Tuba and Euphonium Association and Artistic Director of the River City Brass.
TwitterFacebookLinkedInEmailPrint