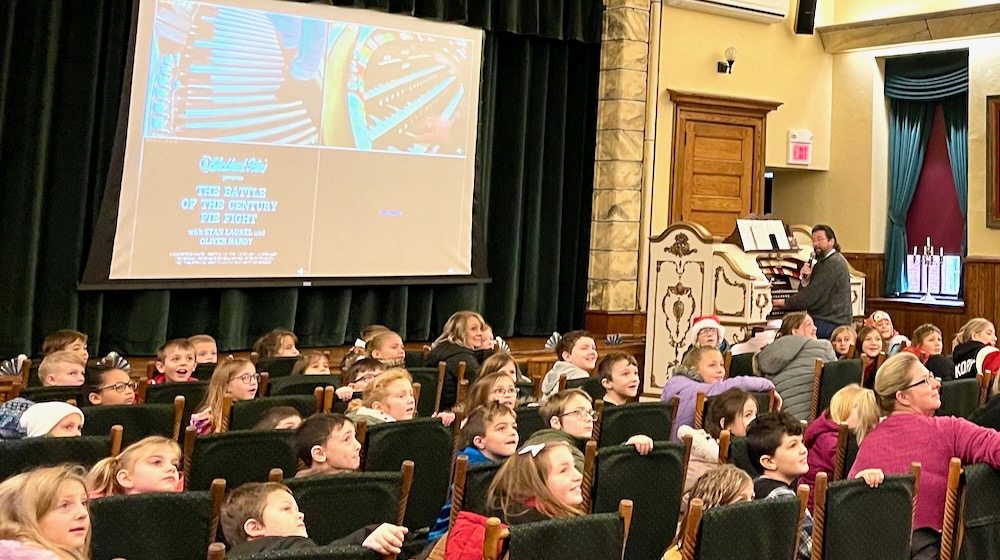 On Monday morning, December 12, 2022, Allegheny RiverStone Center for the Arts continued its successful Educational ArtReach Program in partnership with the Allegheny-Clarion Valley Schools as it bused four hundred students in grades K to 6 and the Jr. and Sr. High band and chorus for Wurlitzer theatre organ “Informances” in Foxburg’s Lincoln Hall by world renowned organist DAVE WICKERHAM. 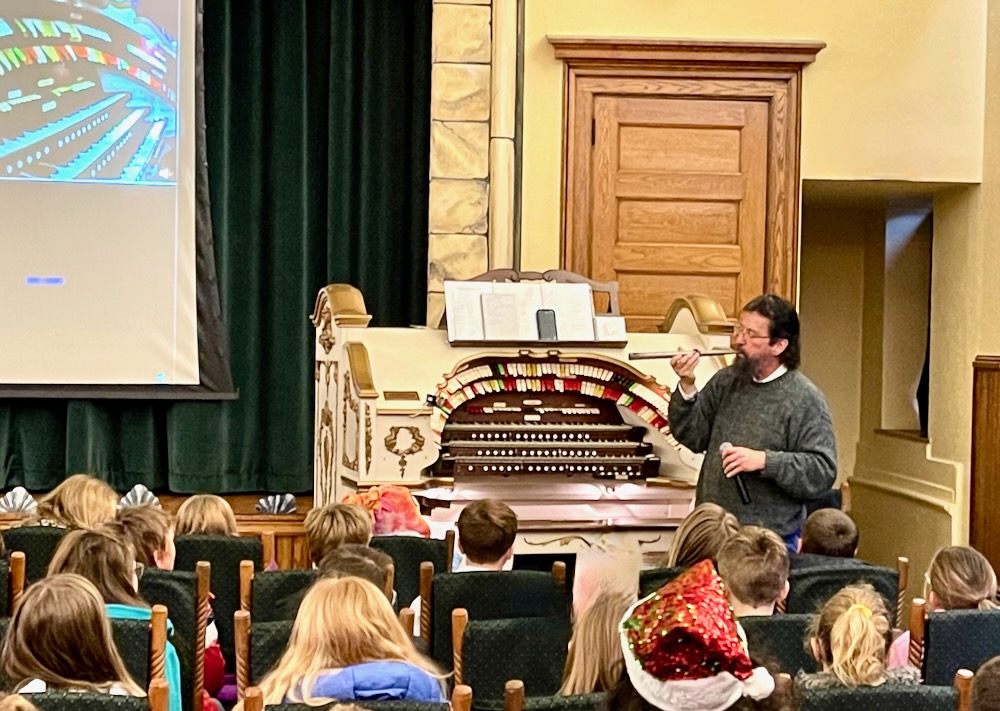 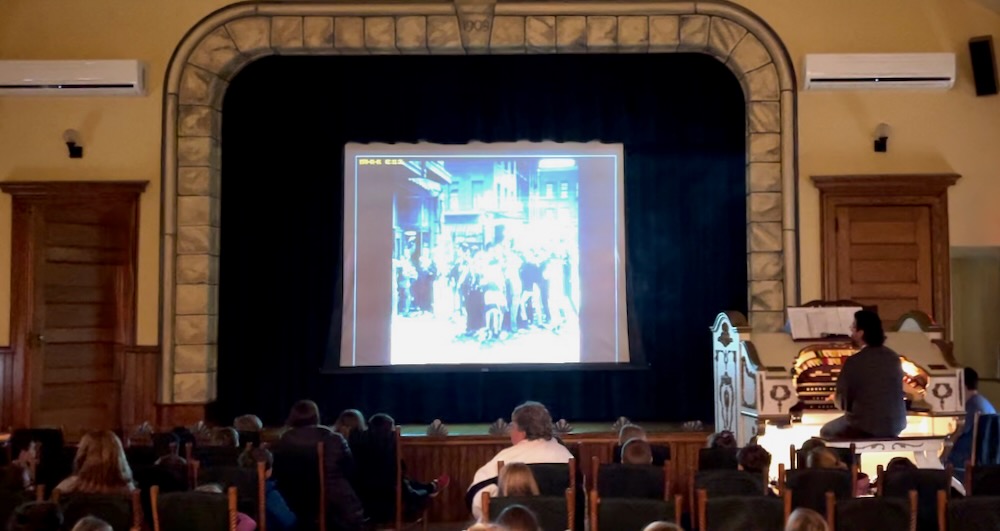 Demonstrating how the Wurlitzer organ would have been used a hundred years ago accompanying silent movies, Dave played his improvised score for a silent short of Laurel and Hardy’s “The Battle of the Century Pie Fight” to peals of laughter from the students. 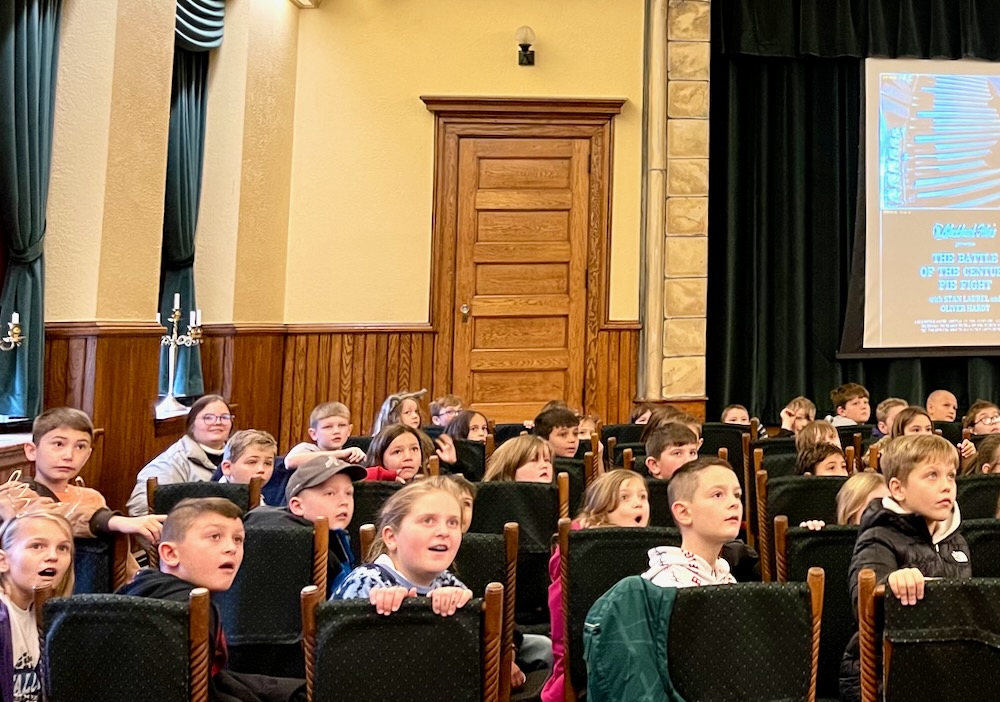 The amazed look on students’ faces showed their fascination as Wickerham displayed the orchestral sounds the theatre organ can replicate, including percussion instruments featured on a shelf at the back of the hall – snare drum, cymbals, marimba, and pitched sleigh bells.

The Lincoln Hall McKissick Mighty Wurlitzer theatre organ is one of only three hundred Wurtlizer theatre organs existing today,from the ten thousand built between 1910 and 1940. The original installation of the Lincoln Hall organ was in the Cleveland Uptown Theatre which opened November 22, 1928 with vaudeville and silent and talking pictures. It was played for several years accompanying silent movies before silent movies were replaced by talking pictures. 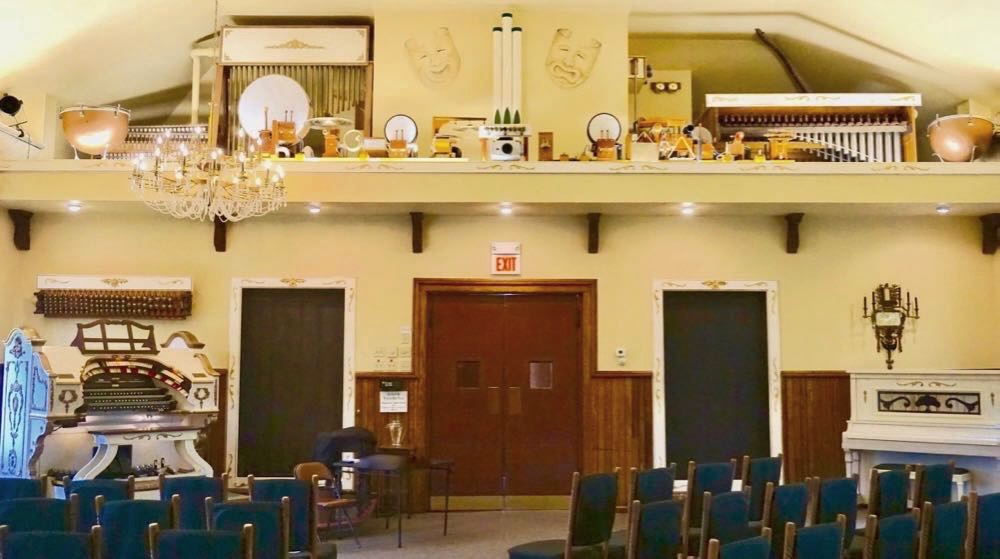 Restored over eleven years by engineer and amateur organist, Paul McKissick, Dr. Arthur and Patricia Steffee purchased the instrument in 2005 to be installed in ARCA’s newly renovated Lincoln Hall.  ARCA is grateful for the generous contribution of Rod and Nadine Stewart underwriting the busing of students – as well as a grant from the Pennsylvania Council on the Art and contributions from ARCA Members and donors that make its Educational ArtReach program possible.

Special thanks to the administration of A-C Valley schools – Superintendent David McDeavitt and Principals Bill Jordan and Lori Marron Sherman, and music teachers Karen Hetrick and Jennifer Lowry for facilitating the visit of A-C Valley students to Lincoln Hall for these concerts. Superintendent McDeavitt said, “This was a great program for our students and staff. I overheard several students talking about the program during the day! And, staff who were in attendance raved about the program; and more overly, the partnership that we have with ARCA. Please keep bringing these programs to our students, together we are changing lives forever!” 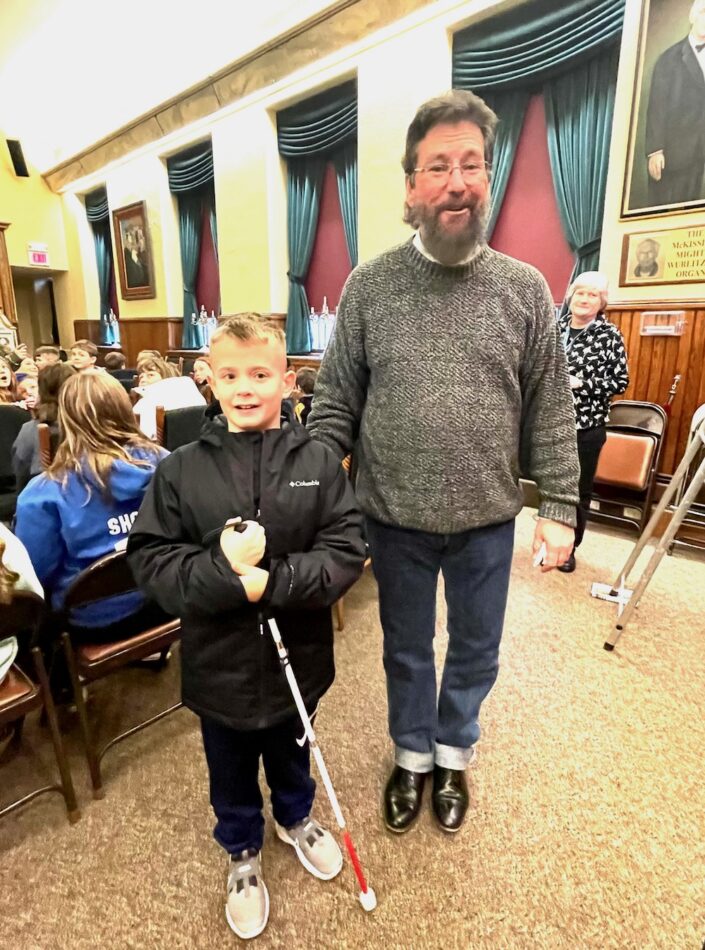 Elementary general music and band teacher Karen Hetrick, who coordinated the program this year, said, “The students at A-C Valley look forward to the special programs that Allegheny RiverStone Center for the Arts brings to our schools. This year our students (and adults) were thrilled to experience the McKissick Mighty Wurlitzer organ and the musical skills of Mr. Wickerham. The trip to Lincoln Hall was the perfect addition to our Christmas season. The students were fascinated with the workings of the organ and inspired by Mr. Wickerham’s performance of their favorite songs. The smiles on our students’ faces as they watched the performance were wonderful to see. Thanks to ARCA for this unique musical experience for our students!” A-C Valley choral director and music teacher, Jennifer Powell Lowry, said, “The students of A-C Valley once again were delighted by programming brought to them by ARCA. This year’s program not only gave them the experience of a wonderful musician and instrument, but also the beauty of Lincoln Hall. These programs serve as an inspiration for our young musicians and promote the arts in our area. We are so thankful for the opportunities brought to us by this organization.” 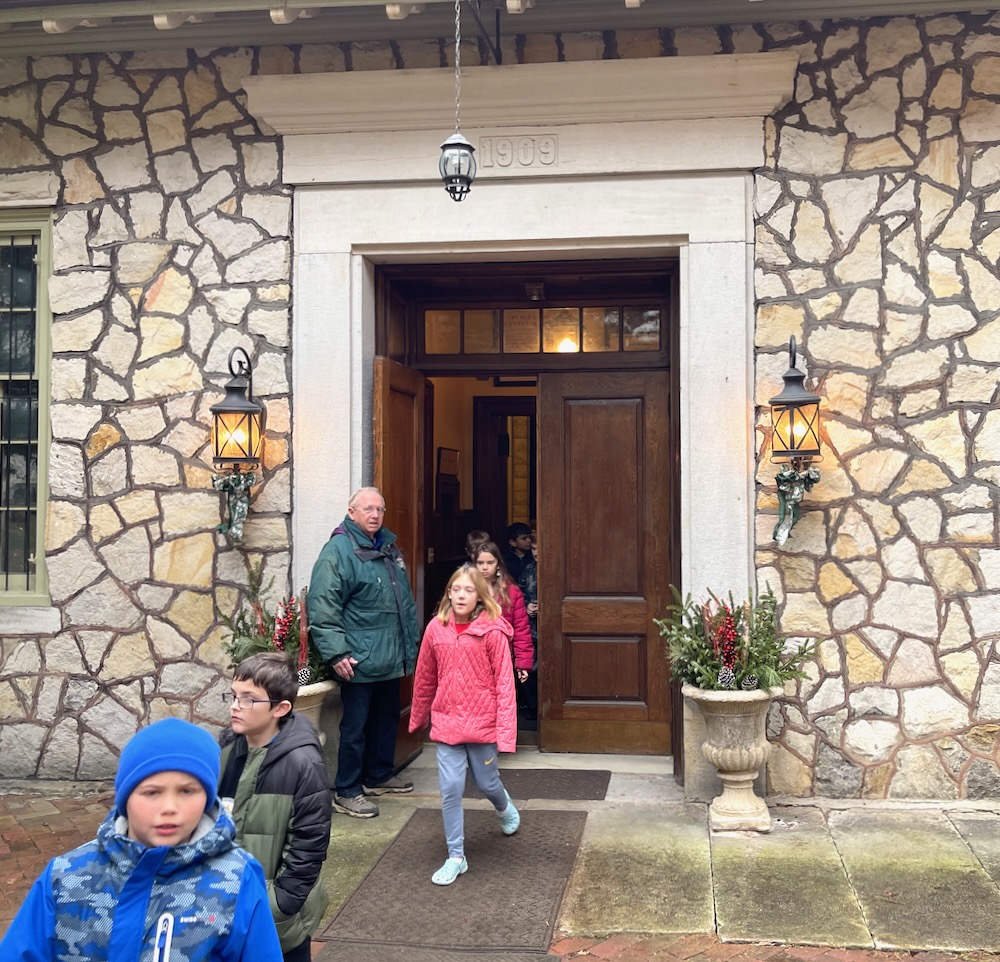 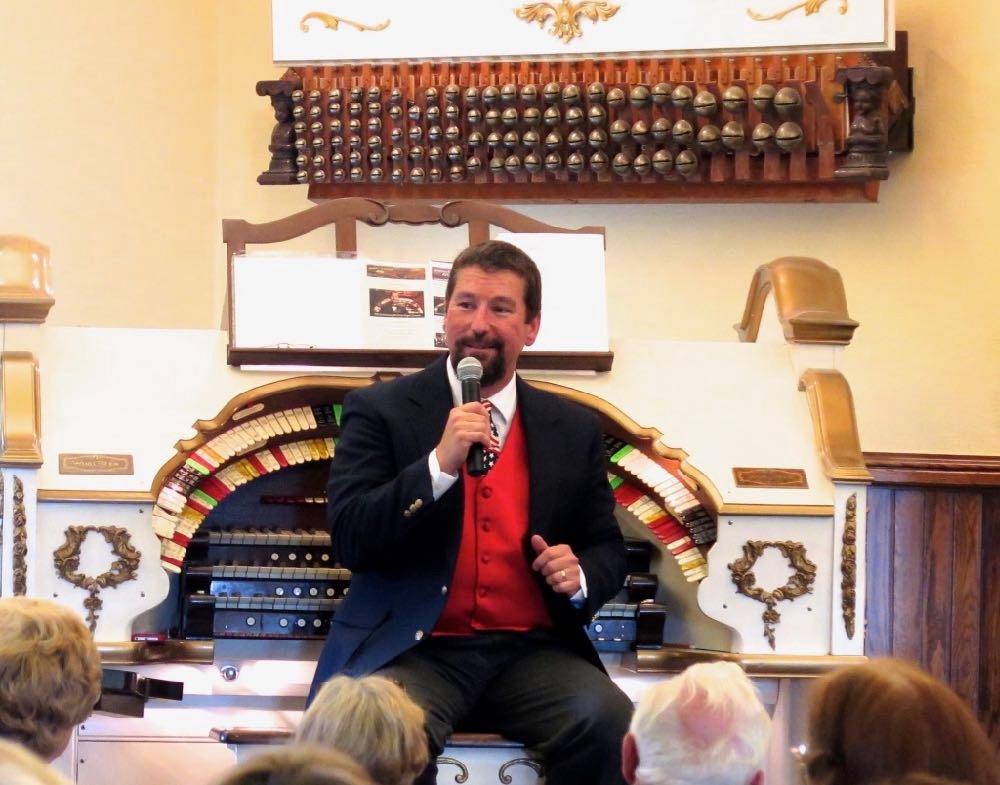 Internationally celebrated theatre organist Dave Wickerham began playing the electronic organ at the age of four, with his musical education starting at age 7 and his first pipe organ experience at age 10. In his early career, Dave served as Associate Organist at the famous Organ Stop Pizza Restaurants in Phoenix, Mesa and Tucson, AZ; as Staff Organist at Pipes and Pizza in Lansing, Illinois; and Staff Organist at the Piper Music Palace in Greenfield, WI. In the early millennium, he appeared for a year and a half at the FIESTA Casino and Hotel in Las Vegas, Nevada.  He has concertized extensively, including various chapters of the American Theatre Organ Society, always while ministering musically and serving at various churches where he lived. Dave has done multiple tours to Australia and New Zealand and recorded many “sold out” CDs, including those made on the 5 Manual, 80 Rank Theatre Organ at the Sanfilippo Residence in Barrington, IL. After seven years as Organist – Curator with the legendary Milhous Collection in South Florida, Dave currently lives in Upper Michigan, from where he continues to travel to perform around the country and the world. 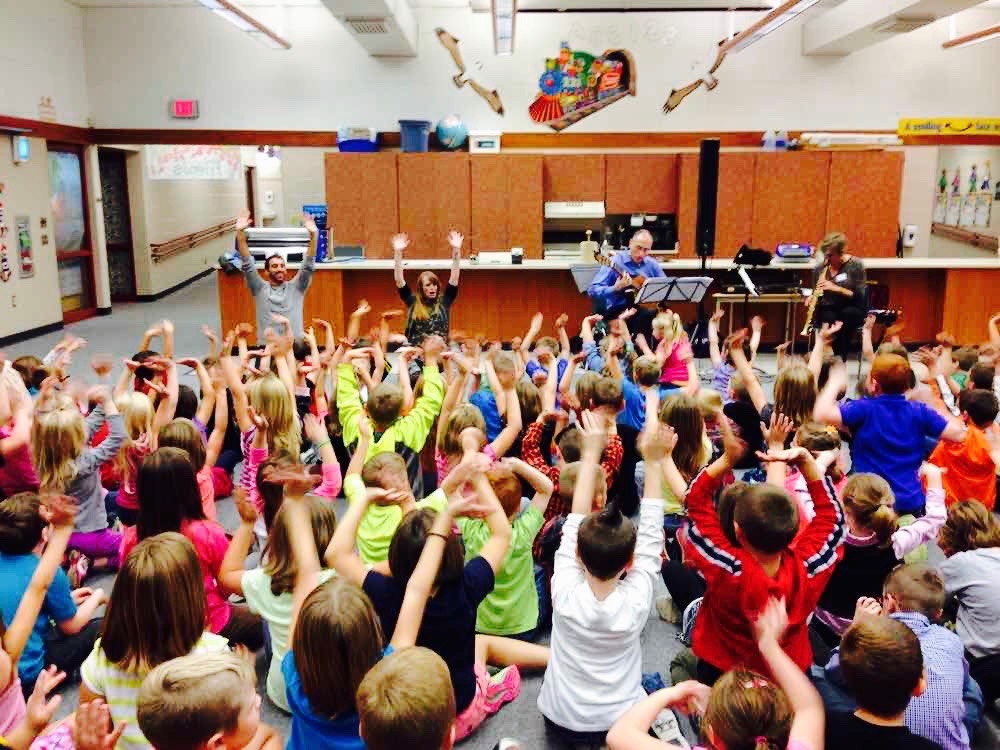 Begun in 2009, ARCA annually brings professional teaching artists and arts education performances and workshops to all students in the A-C Valley Schools and has showcased artwork of A-C Valley students in exhibits at its Red Brick Gallery in Foxburg.  Over the years, small workshops have been performed for elementary students in the common areas outside their classroom as well as assemblies for all students K to 12. After-school masterclasses with C Street Brass and the Akropolis Reed Quintet brought master teaching artist/performers to coach high school band members.ARCA’s Educational ArtReach program is in fulfillment of its mission as a non-profit organization, demonstrating its commitment to contribute to the future of the Allegheny-Clarion valley community through the arts education of its young people.