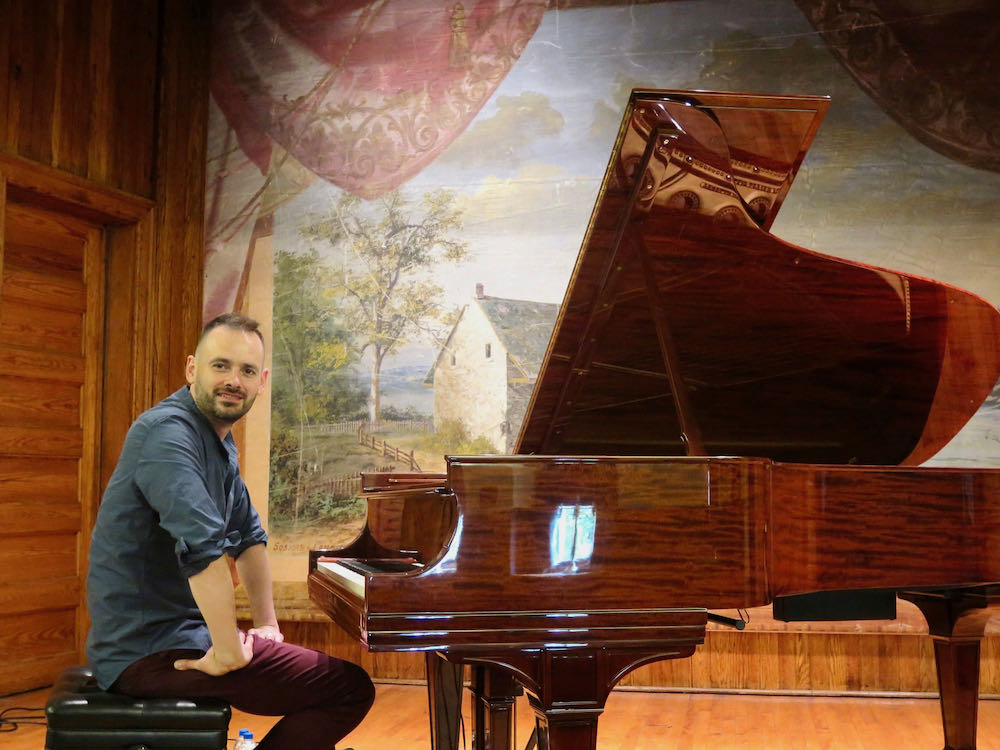 Allegheny RiverStone Center for the Arts welcomes back internationally known pianist NATHAN CARTERETTE on Palm Sunday for a poetically eloquent and spiritually inspiring program of romantic music – the ballet music masterpieces of Tchaikovsky’s “Nutcracker Suite” and Prokofiev’s “Romeo and Juliet” on Sunday, April 10 at 2 PM in Foxburg, PA’s Lincoln Hall. The program will open with performances of the passionate Rachmaninoff Preludes.

As a former church organist and choir director, Nathan is eager to welcome the audience after Palm Sunday church to enjoy the uplifting music of these great Romantic composers. The audience is invited to a wine and cheese reception in the Red Brick Gallery for the opening of its season with the exhibit of painter Paul Means. 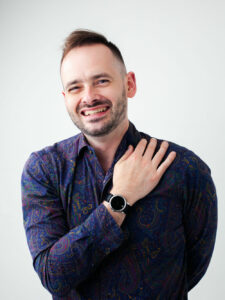 At a time when our hearts are aching with world events – to remind ARCA’s classical music loving audience that music is the poetry of the Soul that transcends national boundaries, Nathan Carterette returns to Lincoln Hall’s Steinway with a program of transcendent emotional beauty – ballet music created by two of the most eloquent Romantic composers.

Back by popular demand after his Beethoven Birthday concert in 2020 and a solo recital in 2015 and collaboration with the Renaissance City WINDS in ARCA’s Tenth Anniversary concert, the audience will be charmed and inspired as this down-to-earth, articulate and masterful communicator takes them on a journey to experience these works as if for the first time  – as a ‘living program note’ and musical guide to the poetic essence of the music he will be performing.

Despite the devastating effects of international COVID lock downs on the music business – with concert halls closed, recital series eliminated and musical performances confined to Zoom performances, nothing could stop the artistry of Nathan Carterette and his passion to share POETS OF THE PIANO with his devoted audiences around the country – albeit remotely. 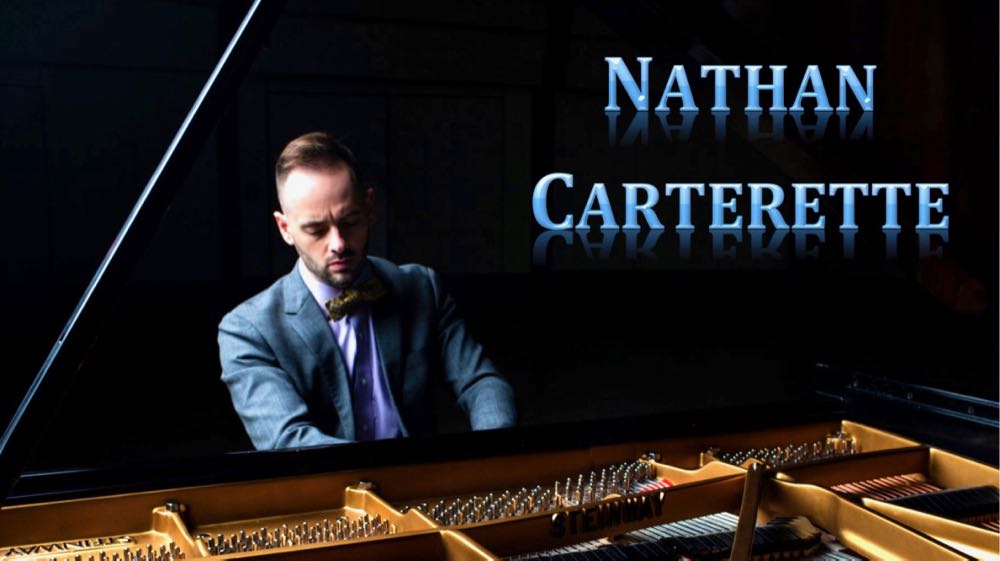 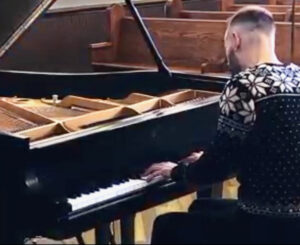 Every week, and sometimes daily, Nathan Carterette posted on Facebook a performance of extraordinary virtuosic piano works – beginning with all the Bach preludes and fugues… and then MUCH more diverse repertoire. Nathan even performed a Beethoven anniversary concert in Foxburg in July of 2020 as ARCA reopened its doors carefully complying with Pennsylvania Green Guidelines. As a result, as the musical world has began to return to normal at the end of 2021, his concert calendar opened with two concerts featuring the romantic ballet music the audience will hear on Palm Sunday: In  January, 2022 a recording featuring Tchaikovsky’s Nutcracker Suite and in March, 2022 Prokofiev’s Romeo and Juliet with the Verb Ballet company in the E.J. Thomas Hall at the University of Akron (pictured below), with Nathan at the piano performing the fiendishly difficult adaptations of the orchestra score.

Allegheny RiverStone Center for the Arts is grateful for Katherine and John Soroka’s generous gift in sponsorship of this concert.

There is no vaccine passport and masks are optional.  Please refrain from attending if you are ill or if you have been exposed to anyone with COVID. 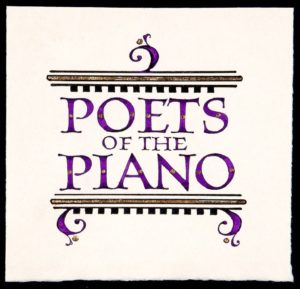 Hailed as “wonderfully poetic,” (Westfalen Post) “exuberant yet sensitive,” (Pittsburgh Post-Gazette) and “very compelling in his power and presence” (International Composer), Nathan Carterette has distinguished himself in the concert world by performing a huge range of works from Elizabethan keyboard music to tour de force Romantic block busters and music written today. His innovative, approachable ‘Poets of the Piano’ has inspired audiences to experience unfamiliar music with open ears, and familiar music with new appreciation.

In 2018-19, Nathan took his “Poets” narrative-recital format on a 25-city American tour – performing to enthralled audiences a wild variety of piano music under common poetic themes and linking together composers across history and today. His joyous, engaging personality and quicksilver genius connect with attentive and enthusiastic audiences wherever he performs around the world.

Immediately following Nathan Carterette’s Lincoln Hall concert, the audience is invited to a wine and cheese reception in the Red Brick Gallery from 4 to 6 PM for the opening of the season with the exhibit of painter Paul Means. 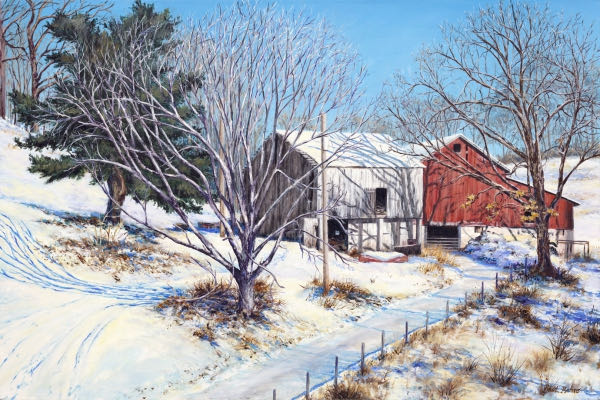 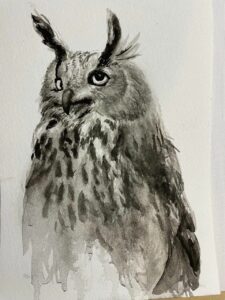 As Spring is bursting forth in the beautiful Allegheny-Clarion River valley, so is the 2022 season of Allegheny RiverStone Center for the Art’s Red Brick Gallery surging with artistic vitality both with five new Cooperative Artists added to its roster and the opening exhibit of painter Paul Means.  The exhibit featuring Paul Means’ paintings of Western Pennsylvania rural landscapes, wildlife, and portraits will be open weekends from Friday, April 8 thru Sunday, May 15 on the second floor of the historic Gallery on Main Street in Foxburg, PA overlooking the Allegheny River.

Bring your family and friends to the wine and cheese Meet the Artist Reception on Sunday, April 10 from 4:00 to 6:00 PM immediately following the 2:00 PM concert of Romantic ballet music in Lincoln Hall with Nathan Carterette playing Rachmaninoff, Tchaikovsky and Prokofiev. The Red Brick Gallery is located at 17 Main Street in Foxburg.  The 2022 season Gallery Hours are Fridays 1:00 – 6:00 PM, Saturdays 11:00–7:00 PM, and Sundays 12:00–5:00 PM. 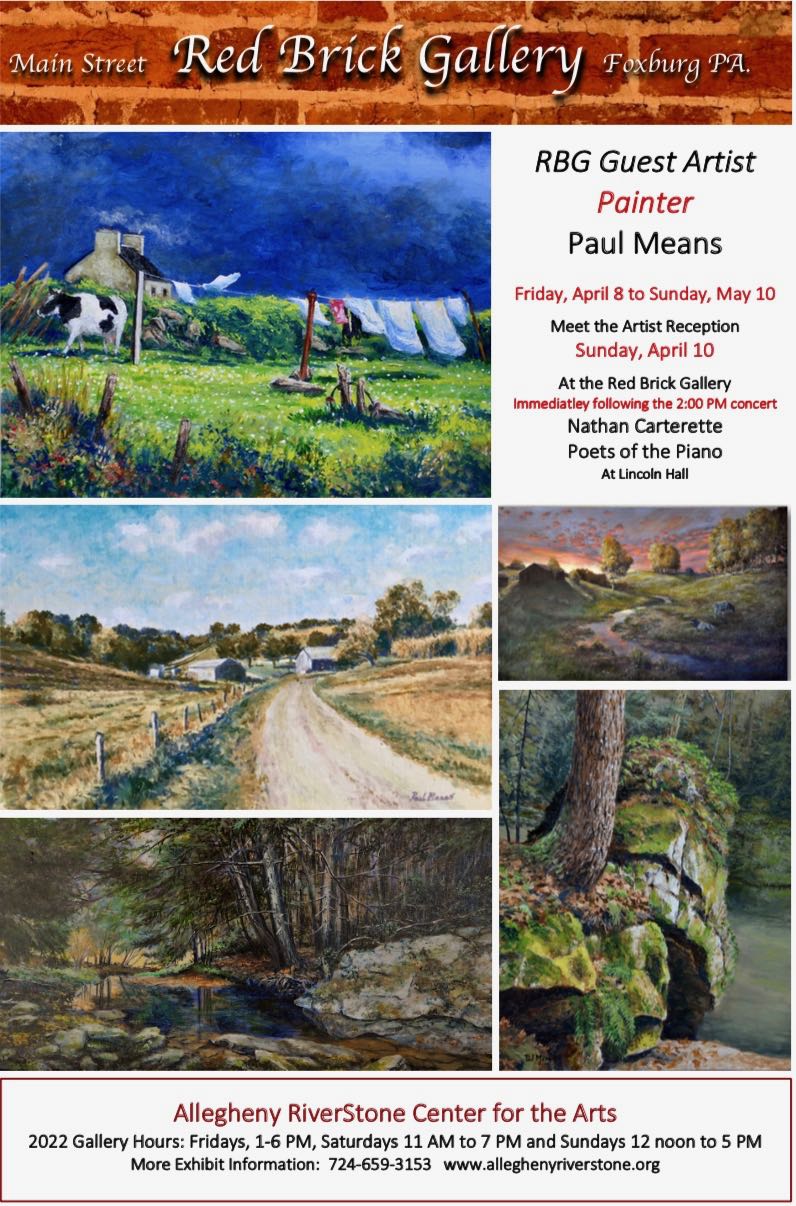 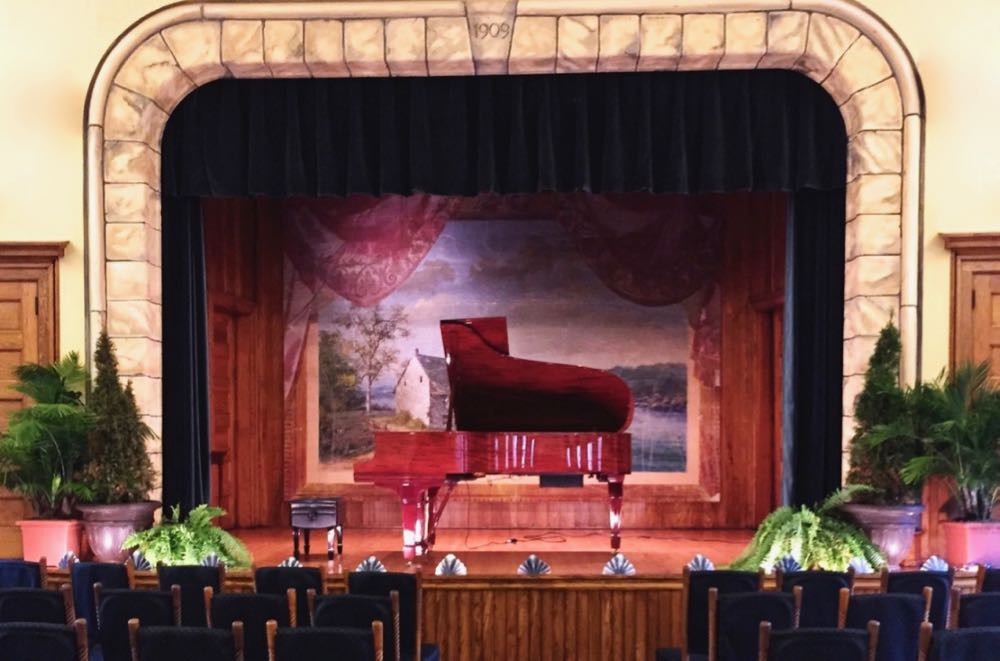 Just an hour and half north of Pittsburgh, Lincoln Hall’s crystalline acoustics provide an intimate environment to enjoy chamber music and pianists performing on its 7 foot Steinway. Built in 1909, the stage’s backdrop is an original hand-painted canvas of an actual scene downstream on the Allegheny River.  Lincoln Hall has a capacity audience of 120.  The hall is located on the second floor of the Foxburg Free Library.

Plan to enjoy an early Spring day  in beautiful Foxburg!  Before enjoying the concert in the air conditioned comfort of Lincoln Hall, arrive early for a walk along the Allegheny River trail or rent bicycles with Foxburg Tours.

Have lunch at the Allegheny Grille or for more casual fare at  Foxburg Pizza with salads, sandwiches and pizza.  Save time to enjoy wine tasting at Foxburg Wine Cellars and savor a gourmet coffee and hand made chocolate at Divani Chocolatier and Barrista.

Or spend the night overlooking the Allegheny River either in Foxburg at the lovely Foxburg Inn or in Emlenton – just a few miles up the river –  at The Barnard House. 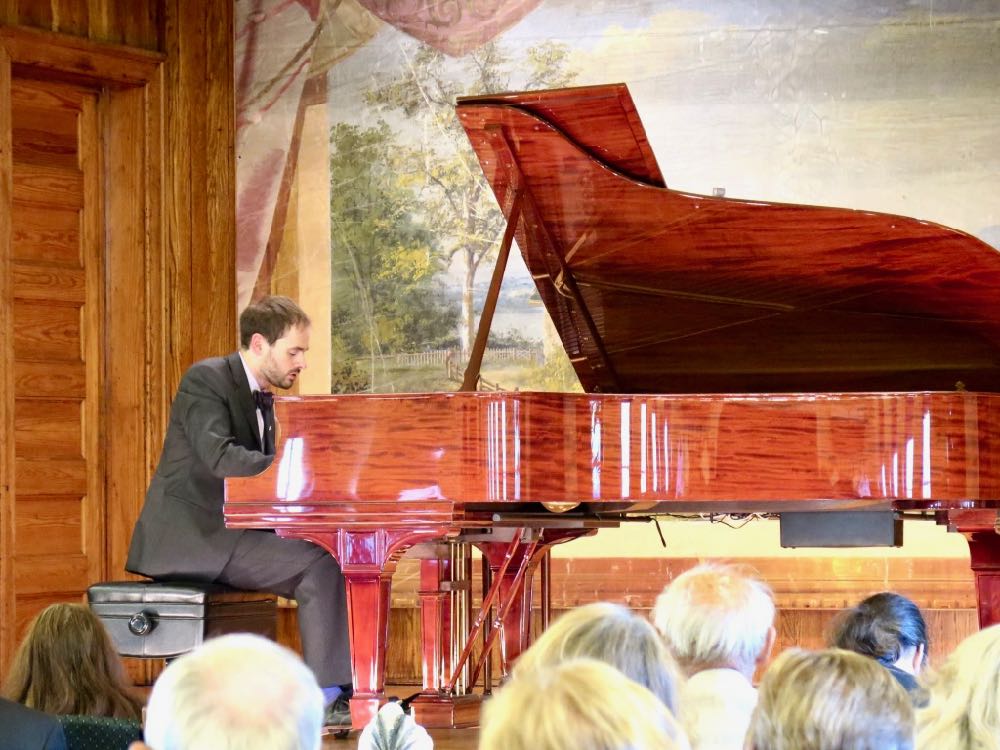 Nathan Carterette will be performing  a program of Romantic music featuring music for the ballet  to include: Tchaikovsky’s Nutcracker Suite and Prokofiev’s Romeo and Juliet, opening the program with virtuosic Rachmaninov Preludes. 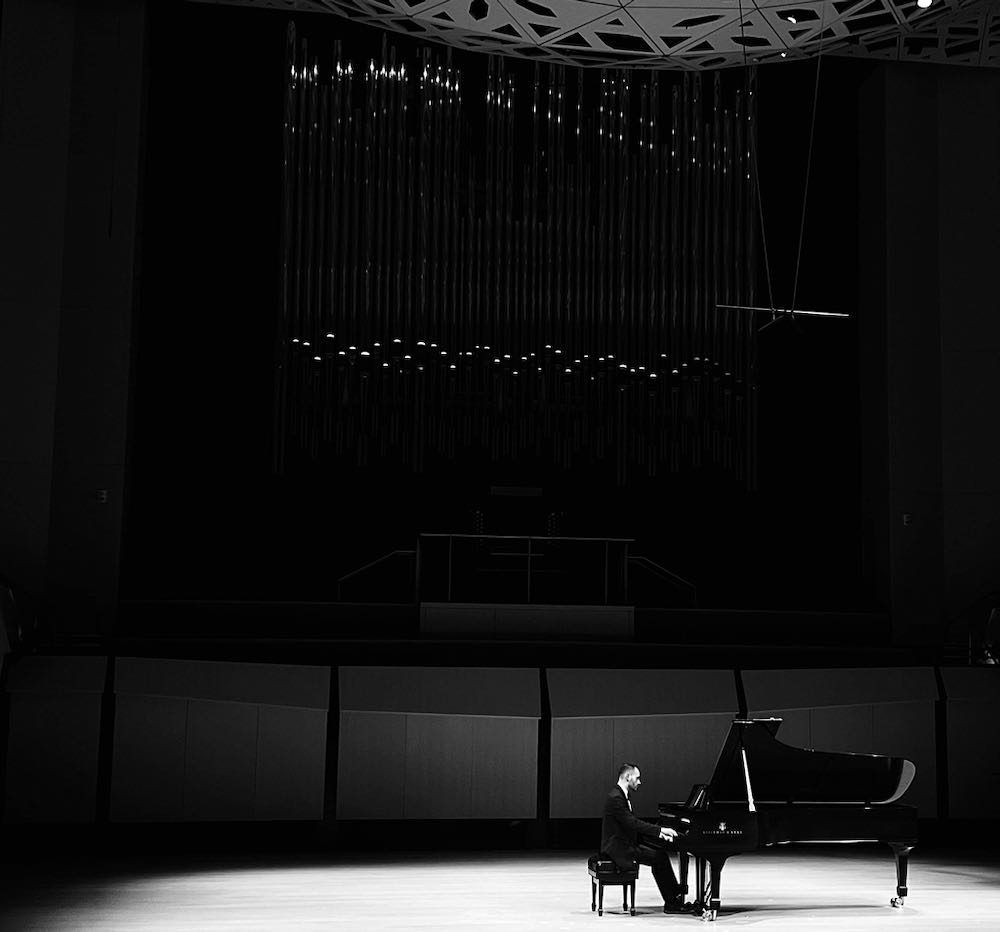 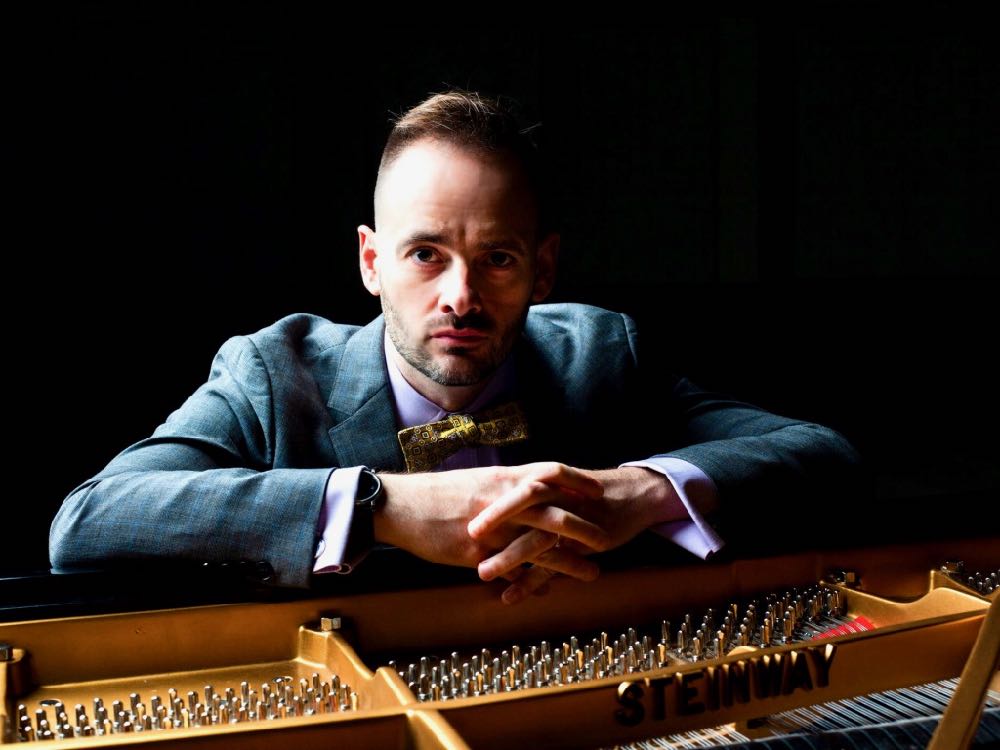 Hailed as “wonderfully poetic,” (Westfalen Post) “exuberant yet sensitive,” (Pittsburgh Post-Gazette) and “very compelling in his power and presence” (International Composer), Nathan Carterette has distinguished himself in the concert world by performing a huge range of works from Elizabethan keyboard music to music written today. His innovative, approachable ‘Poets of the Piano’ has inspired audiences to approach unfamiliar music with open ears, and familiar music with new appreciation. 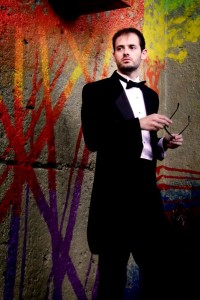 ‘Poets’ is a narrative-recital format presenting a wild variety of piano music under common poetic themes, linking together composers across history and today. In 2018-19, Nathan took ‘Poets’ on a 25-city American tour, performing to enthralled audiences in theaters such as the Indian Wells in Palm Desert and the Rhea Miller in Saginaw; in many universities such as UC-Santa Cruz, UT-El Paso, University of Vermont, University of South Florida and more. ‘Poets of the Piano: Acts of Faith’ is now available on disc and in all major streaming services.

Appearing also in traditional formats, Nathan has been presented in such venues as Weill Recital Hall and the Yamaha Piano Salon of New York City, the Gasteig in Munich, the Museum für Kunst und Gewerbe of Hamburg, and Cleveland’s Trinity Cathedral; in several universities such as the Berklee School of Music, Cleveland Institute of Music, Baldwin Wallace Conservatory, Busan National University of South Korea, and Carnegie-Mellon.

Educated at Yale University, where he studied with Boris Berman, and University of Missouri-Kansas City, where he studied with Robert Weirich, Nathan began his piano studies at the age of eleven with Cleveland’s legendary Birute and Anthony Smetona. A chance encounter in 2004 with Welsh composer-pianist Dafydd Llywelyn led to an invitation for intensive private study in Munich, and the world-premiere performance of Llywelyn’s monumental piano séance, ‘TimeQuake, no.VII/part.II’  in Hamburg. 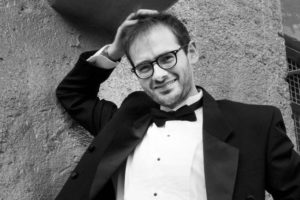 Besides Llywelyn, Nathan has worked intensively and creatively with many composers, including Quentin Kim, Dinos Constantinides, Judith Shatin, Marcus Maroney, James MacMillan, and others. In 2013, Nathan traveled to Korea to perform and record the complete solo piano works of composer-pianist Quentin Kim.

Known for his dedication to the music of Bach, Nathan has performed the Goldberg Variations in dozens of concerts in America, Europe, and Asia. His live broadcast of the Goldberg on Pittsburgh’s classical radio, WQED, became the most requested pledge drive item in that radio’s history. His studio recording is available on all major streaming sites.

Nathan, together with organist Edward Alan Moore, form The Arsenal Duo. They have performed many concerts throughout the country, from their 2013 debut in the historic Stambaugh Auditorium in Youngstown, OH; they were also featured performers there for the 2017 American Guild of Organists Great Lakes Regional Convention.

Nathan’s interpretation of Bach’s Goldberg Variations – hailed for crystalline clarity, technical virtuosity and poetic sensitivity – was released on CD in 2019.  Having concertized with the work across America and in Europe and Asia, his performance of the Goldberg Variations with Pittsburgh’s ATTACK Theatre in a dance production based on the work was a highlight of Pittsburgh’s 2019 cultural season.  Nathan’s live broadcast of the Goldberg on Pittsburgh’s classical radio station, WQED, became the most requested pledge drive item in that radio station’s history.

Driven by insatiable curiosity and the love of the new, Nathan has collaborated intensely with many living composers, finding innovative ways to program their music and share it with new audiences. These collaborations include his formative study in Germany with Welsh composer-pianist DAFYDD LLYWELYN and world-premiere performance of Llywelyn’s monumental, TimeQuake, no.VII/part.II, an eighty-minute ‘piano séance,’ at the Hamburg Museum für Kunst und Gewerbe; and in 2013, Nathan traveled to Pusan, Korea, to record the complete solo piano works of pianist-composer QUENTIN KIM, released on his CD, SEHNSUCHT (translated as “wistful longing“).

In 2020, Nathan released his first recording of a projected ‘Poets of the Piano’ series uniting a wide diversity of music under common themes:  Poets of the Piano: ACTS OF FAITH follows the composer’s search for spiritual transcendence in music. Nathan’s performance of composer Judith Shatin’s Chai Variations on Eliahu HaNavi is featured with the music of Bach (arranged by Busoni), Philip Glass, and Alexander Scriabin.

Nathan’s recordings may be purchased on his website: https://www.nathancarterette.com/recordings

Nathan has written about his ‘Poets of the Piano’ project and Bach’s Toccata and Fugue in the booklet for his CD – “ACTS OF FAITH”: 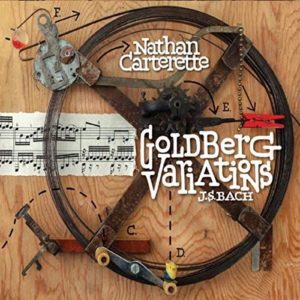 Hailed as the ‘most creative’ dance production of 2019, the Pittsburgh Post-Gazette also wrote, ‘Nathan Carterette delivered an exuberant yet sensitive interpretation from memory, exuding both polish and spontaneity in equal measure.’ The show ran for six sold-out performances.

In conjunction with that production, Nathan recorded and released the Goldberg Variations with an original art-piece assemblage by Cheryl Jacobsen gracing the cover: a Rube Goldberg machine that after a series of complex gestures, churns out the music. The recording is available on all digital music sites, and in hard copy from this website.

A live performance, recorded in the Fred Rogers Studio of WQED, also became that radio station’s most requested pledge item.

POETS OF THE PIANO 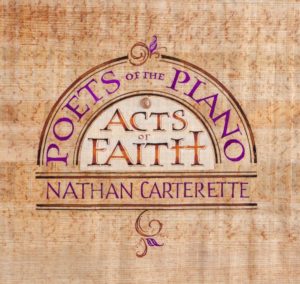 Poets of the Piano is an innovative narrative-recital, featuring a wide range of piano music organized around common themes. Inspired by the never-ending expressive possibilities of the piano, these programs are able to weave together traditional repertoire as well as new music, bringing together composers of all generations and aesthetics. Through a story-telling styled narration, the listener will hopefully come away with new appreciation for the familiar, and excitement for the new.

‘Poets of the Piano: Acts of Faith’ was recorded and is available on all digital music sites as well as in hard copy from this site. It is the first in a projected series of recordings of the ‘Poets’ programs. The hard copy features an essay written by Nathan connecting the visions of each of the composers, living in different times and places.

Nathan Carterette-Inspiring Music for the Ballet