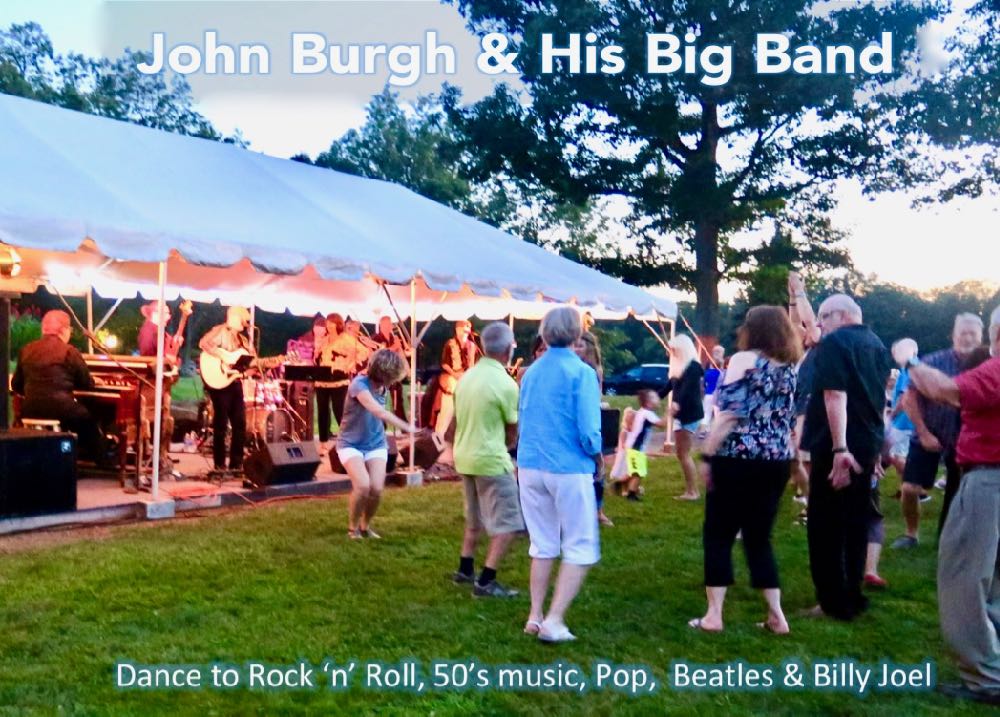 HAVE AN UNFORGETTABLE TIME dancing in the golden twilight to Rock ‘n’ Roll, 50’s, Beatles and Billy Joel with John Burgh’s BIG BAND and special guest, Emmy Award winner PETE HEWLETT, in an OUTDOOR CONCERT on Sunday, August 12 from 6:00 – 9:00 PM at beautiful RiverStone Farm in a new shaded, grassy location west of the H-Barn.  Bring the WHOLE family – your lawn chair, cooler, picnic basket, AND dancing shoes – and join us for a magical night in one of the most scenically beautiful places in western Pennsylvania – RiverStone Farm.

Back by popular demand – THIS SHOW WILL ROCK!!  Enjoy the concert seated in the shade of glorious trees or join the joyous dancing –  barefoot in the grass or in your comfy shoes – making it a night you’ll long remember.

A favorite of ARCA audiences and known throughout the Pittsburgh area for his musical versatility in a broad spectrum of styles, keyboardist and band leader, JOHN BURGH is bringing a eight piece Big Band of Pittsburgh’s preeminent instrumentalists and vocalists – including celebrated Pittsburgh singers, LISA BLEIL and Emmy Award winner PETE HEWLETT performing it ALL – from 50’s, rock ‘n’ roll, Beatles, Billy Joel, jazz standards and vintage country to popular music… sure to delight the concert crowd and get ALL ages up and dancing!

NEW this year is singer/guitarist/recording artist PETE HEWLETT who has toured internationally with Billy Joel, Carly Simon, Julian Lennon and others.  Pete will be singing Billy Joel, Beatles and Paul McCartney hits and more! Check out his amazing “Maybe I’m Amazed” youtube video below from the PBS series on WQED, “Live from Studio A”, where he sang with LISA BLEIL, who will be returning to the RiverStone Farm outdoor concert this year and singing once again with Pete on August 12. 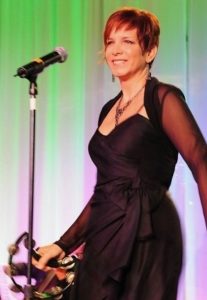 Versatile vocalist LISA BLEIL is known for her performances on the Emmy-winning PBS series “Live From Studio A” and can also be seen on the nationally-televised “Rock, Rhythm & Doo-wop” and “Red, White & Rock” performing with Frankie Avalon, Frankie Valli and Connie Francis, among others. 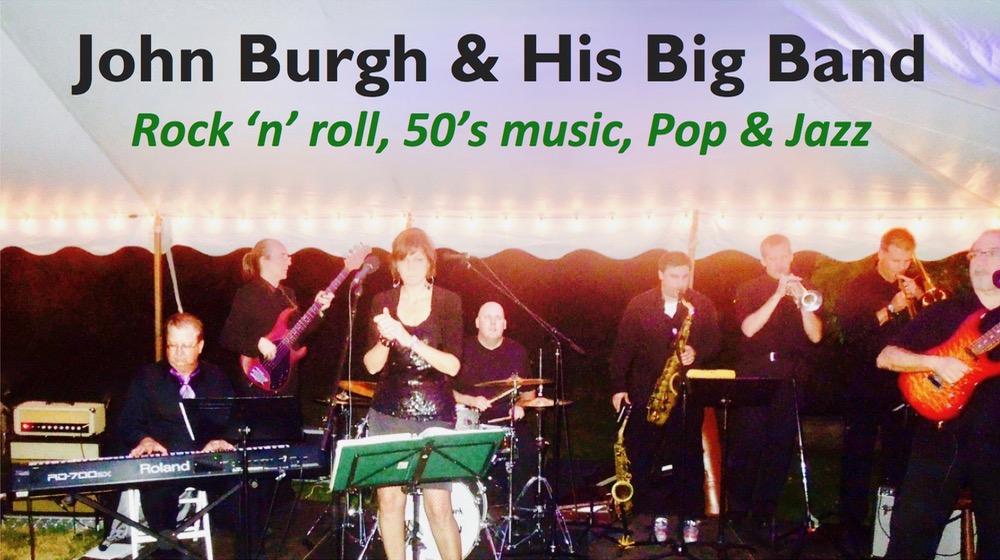 Would you also like to enjoy ARCA’s annual Membership Pig Roast Picnic, which precedes the concert this year at 4:00 PM for ARCA Members? 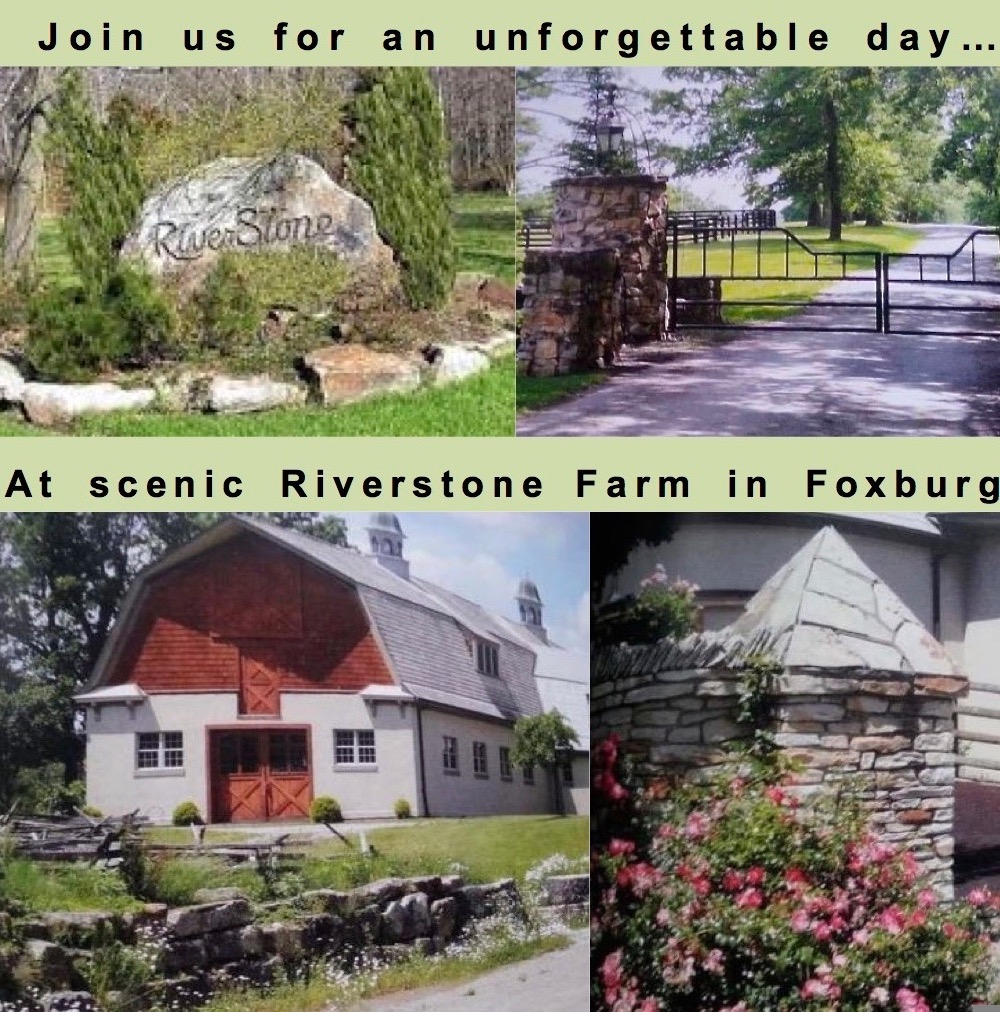 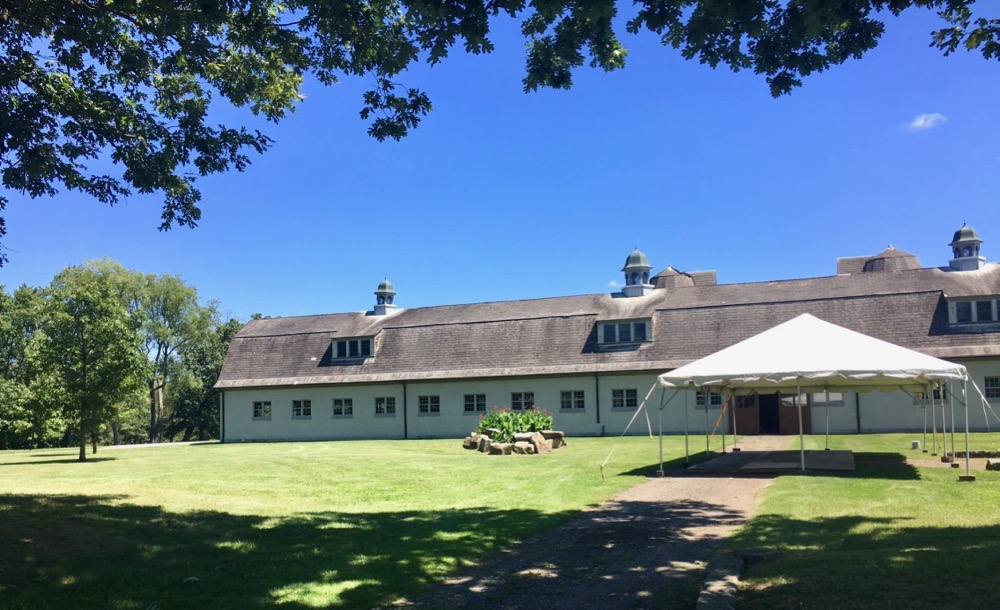 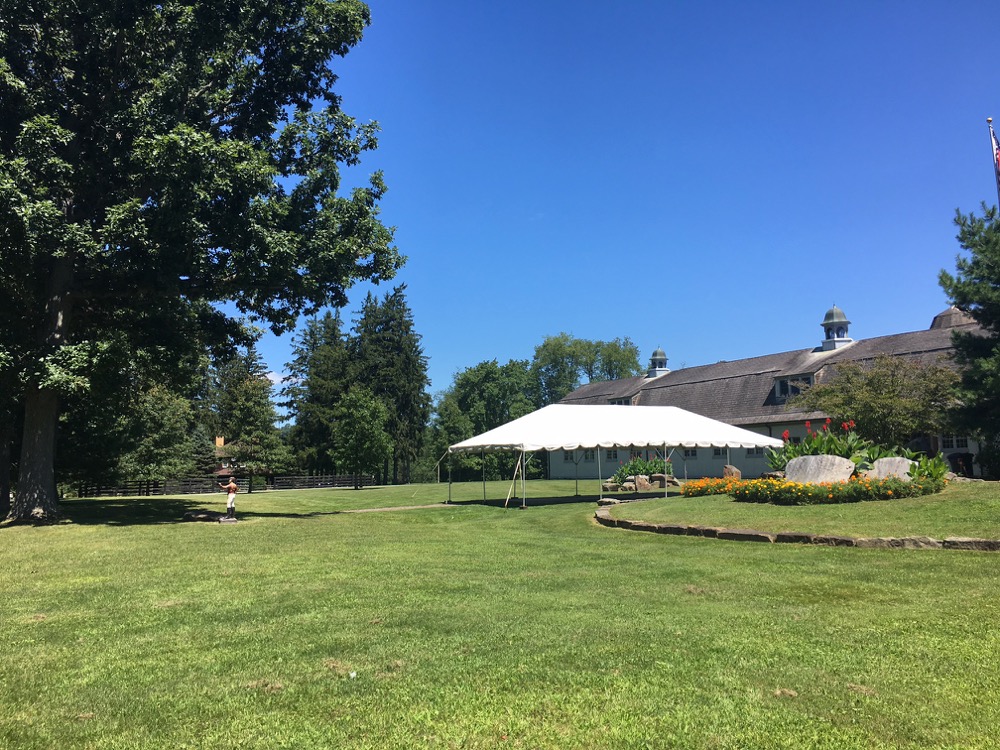 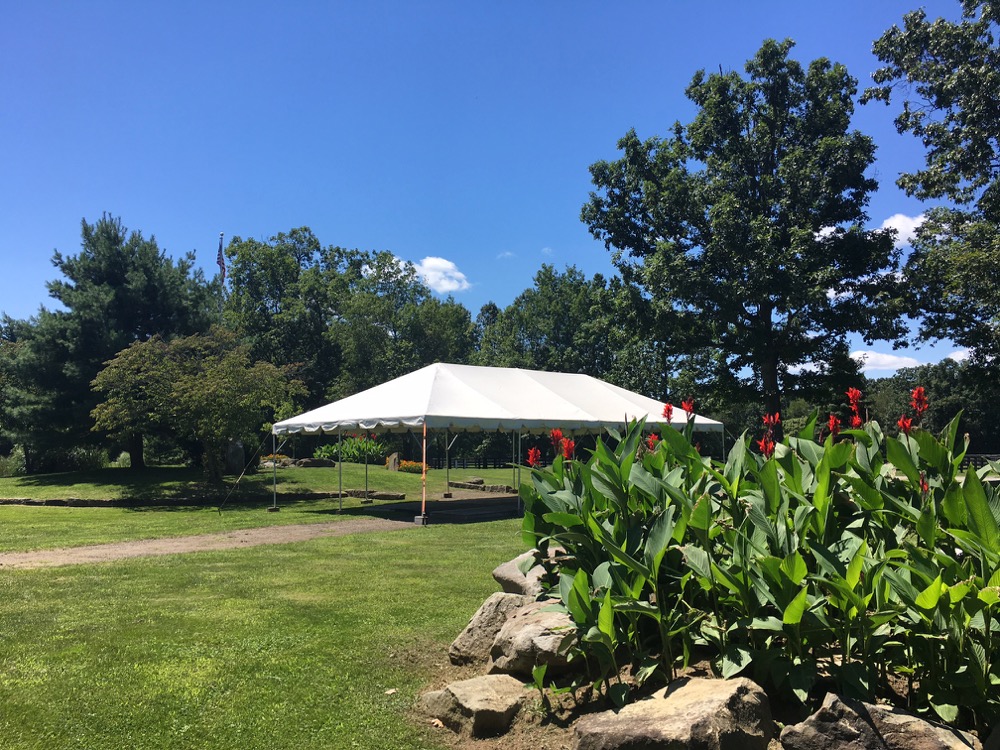 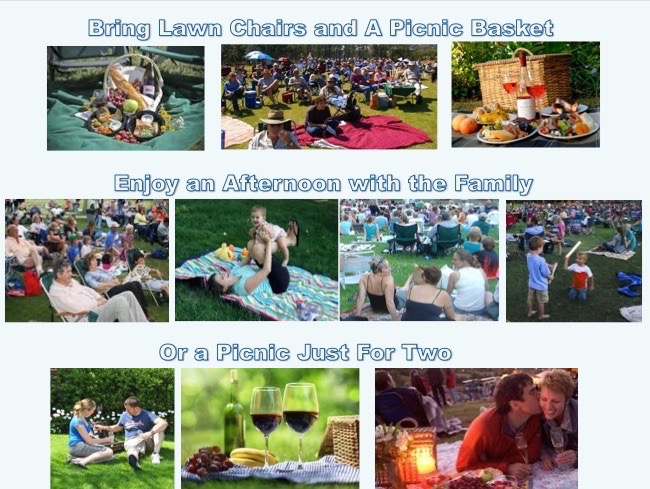 Before the concert stop by the Red Brick Gallery and Gift Shop to enjoy the offerings of talented Cooperative Artists from the region and view the works by Glenn Thompson, Cheri Lee Anderton-Yarnell and Jason Floyd Lewis – Reflections & Impressions:  Paint Lens & Clay. 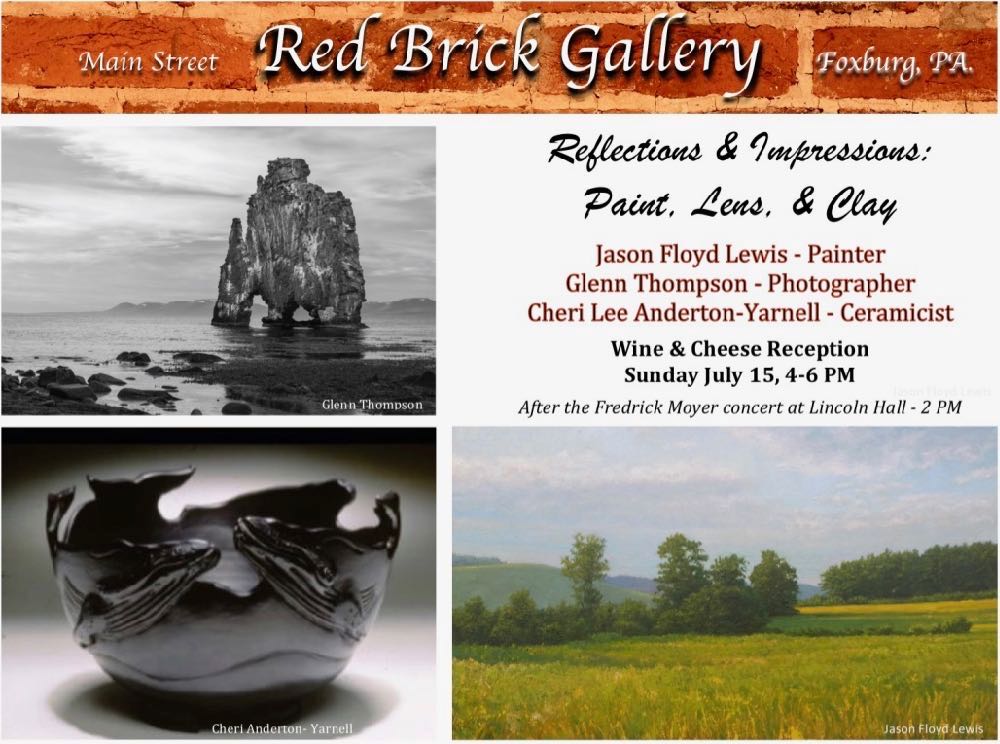 Enjoy a walk along the Allegheny River trail or rent bicycles with Foxburg Tours OR have a Segway tour of beautiful RiverStone Estate in the morning or early afternoon!  Have lunch at the Allegheny Grille with seating overlooking the Allegheny River, or for more casual fare, at Foxburg Pizza with salads, sandwiches and pizza.  Save time to enjoy wine tasting at Foxburg Wine Cellars and savor a gourmet coffee and hand made chocolate at Divani Chocolatier and Barrista.  Or spend the night in the lovely Foxburg Inn. 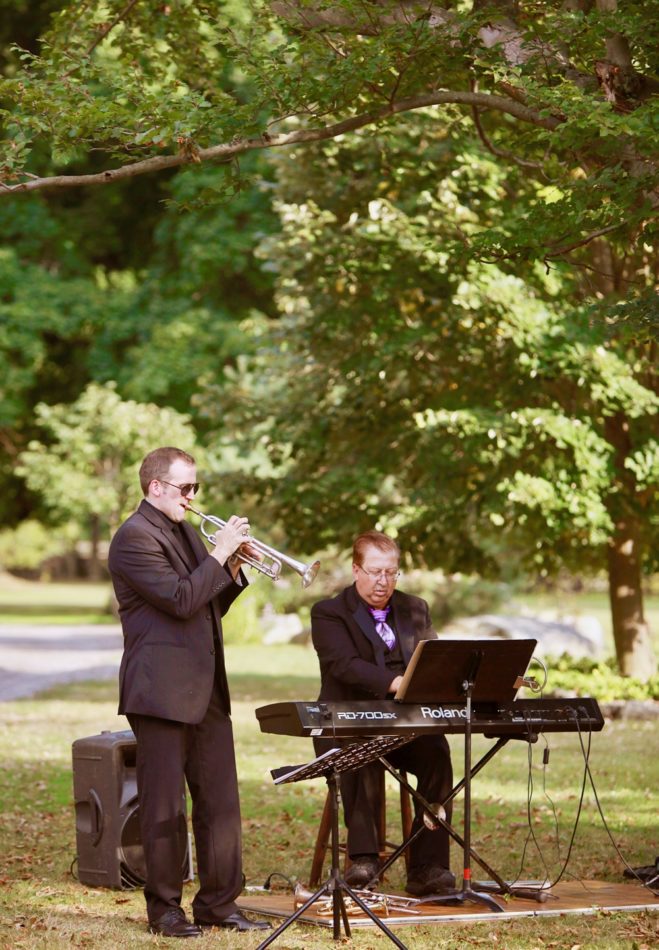 John Burgh and his band have been so popular with ARCA Members playing during the annual membership picnics and late into the night, with Members dancing for hours.  Allegheny RiverStone Center for the Arts is proud to bring JOHN BURGH back with a eight piece BIG BAND  for an ENTIRE evening of joyous music-with celebrated Pittsburgh musicians – including celebrated singers, PETE HEWLETT and LISA BLEIL, performing 50’s music, rock ‘n’ roll, vintage country, popular music, Beatles and Billy Joel… sure to get ALL ages up and dancing.

It’s going to be a gorgeous summer night of grooving and rocking to BLUES, BEATLES & ROCK ‘N’ ROLL as keyboardist John Burgh and superb cross-over, world travelled and acclaimed musicians will make you want to get up and shake a leg… but if you prefer to sit and enjoy, there will be plenty of musical variety and outrageous riffing to entertain and delight!

From the Beatles and Billy Joel to Rhthym & Blues and Rock n Roll, vocalists LISA BLEIL and PETE HEWLETT – veterans of the PBS “Live from Studio A” series – are sure to delight AND get you up and dancing! 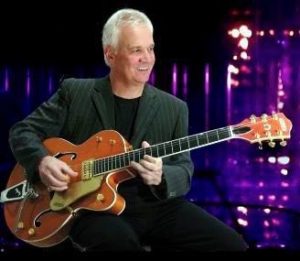 Pete got his first recording contract at the age of 16.  His band, “Peter’s Pipers,”won a local Battle of the Bands contest which sent them on to the National finals.  They came in 6th place and that got them a deal with Phillips Mercury Records.

In the early seventies, Pete joined “Sweet Lightning,” a local Pittsburgh group and signed a contract with RCA Records.  The band recorded an LP and a few singles that had some regional success.  In the mid seventies, Pete moved to Cleveland where he recorded with Eric Carmen of The Raspberries, then joined the “Euclid Beach Band.” 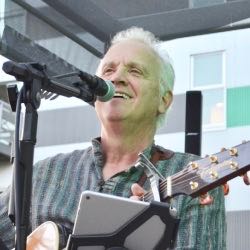 But the real turning point came a few years later when Hewlett’s former “Sweet Lightning” band mate, Sid McGinnis (David Letterman’s guitarist), recommended Pete to Carly Simon who was looking for a new back-up singer/guitarist.  Pete got the job, moved to New York, recorded “Come Upstairs” and headed out on tour with Simon.  It was during this time in New York that Hewlett hooked up with drummer Michael Shrieve (Santana) and formed “Novo Combo.”  They were signed to Polygram and released two albums.  Music reviewer George Thatcher said, “The songs which stand out for me are the ones in which Pete Hewlett sings.”  Novo Combo toured with The Who, Cheap Trick, Greg Lake and performed at the 1981 Montreux Jazz Festival.

Hewlett joined Billy Joel for the “Innocent Man” (1984) and “The Bridge” world tours.  And then came the tour that made international news: Billy Joel would bring a fully-staged rock production to the Soviet Union as part of the Reagan-Gorbachev 1987 Geneva summit.  Hewlett performed with Joel in Moscow and Leningrad and made history as part of the first live rock radio broadcast in Soviet history, which was also simulcast in the United states.  The live double-album, Kohuept (translation: ‘In Concert’), chronicled the trip. 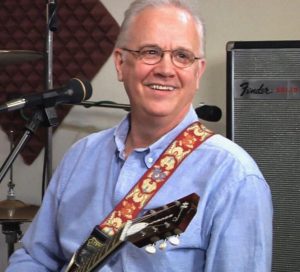 Pete won an Emmy Award in 2007 as host/performer of WQED’s (PBS affiliate station) “Live FromStudio A”.

Vocalist Lisa Bleil was a featured performer on the Emmy-winning PBS series “Live From Studio A” and can also be seen on the nationally-televised “Rock, Rhythm & Doo-wop” and “Red, White & Rock” performing with Frankie Avalon, Frankie Valli and Connie Francis, among others.  Lisa’s theater credits include “Fiddler on the Roof”, “The Sound of Music” and “Kiss Me Kate”. She also spent several years with Latshaw Productions as a writer, director, and performer of themed musical reviews that performed in the Pittsburgh area as well as touring the Eastern US and Canada.